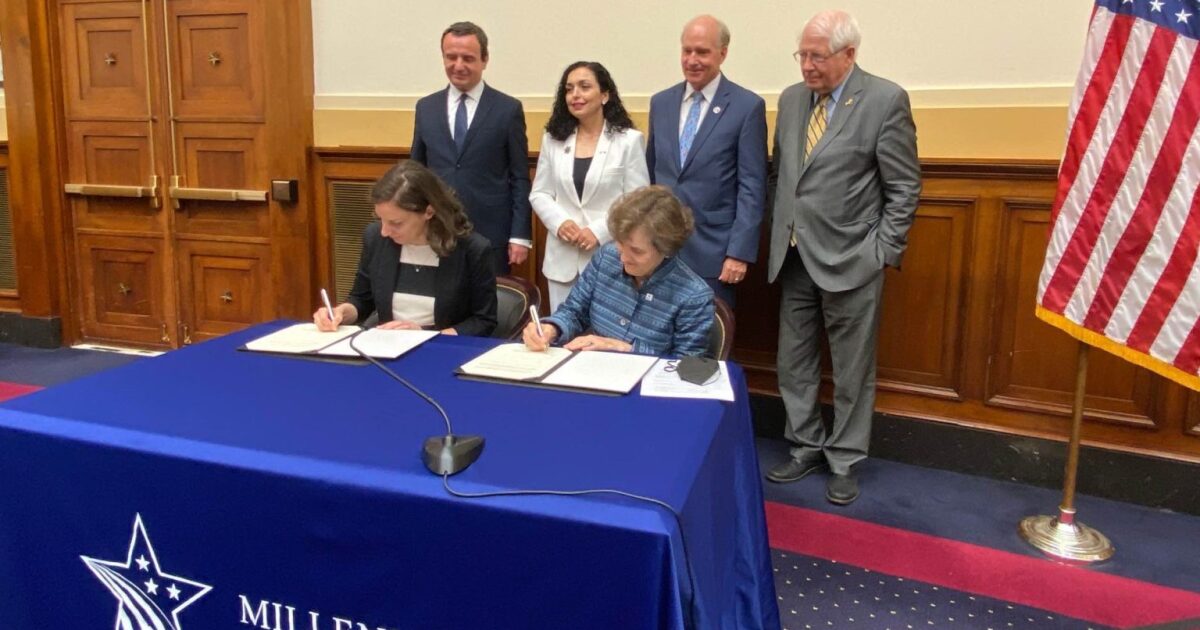 An independent U.S. government agency has allotted a $202 million grant to Kosovo toward establishing a sustainable energy infrastructure.

The Kosovo government contributed $34 million to the grant, with the rest coming from the Millennium Challenge Corporation, which was established by Congress in 2004. MCC has selected Kosovo for this grant after it met 20 independent and transparent policy indicators on good governance, fighting corruption, and respecting democratic rights.

The Kosovo Compact will contribute to energy storage, new technical training programs for youth and women, and solicitation from private sector entities. It is anticipated that the grant will last the country five years.

THE SCHUMER-MANCHIN DEAL: WHICH GREEN PRIORITIES MADE THE CUT

President of Kosovo Vjosa Osmani, Prime Minister Albin Kurti, Minister of Economy Artane Rizvanolli, and Chairman of the House Foreign Affairs Subcommittee on Europe, Energy, the Environment and Cyber William Keating (D-MA) were present for the signing of the compact in Keating’s office in the Rayburn House Office Building Wednesday. Within 24 hours, the Kosovo Assembly unanimously voted for the compact, almost a month after the MCC Board of Directors unanimously approved the compact.

“Today’s ceremony is a testament to the special relationship between the Republic of Kosovo and the United States of America and the culmination of hard work that has led to this transformational agreement for our energy sector,” Osmani said at the signing.

Since Kosovo’s hard-earned independence from Serbia in 2008, many countries have yet to recognize the Balkan state as a country of its own. China, Serbia, Russia, India, Brazil, Mexico, Argentina, Chile, and many countries in Africa still don’t recognize Kosovo, which has resulted in the country relying on costly emergency energy imports from its few allies. Four out of 10 households there experience energy poverty, the highest rate among the five neighboring countries where there are data.

“The compact program will be the cornerstone of our green transition, and it will contribute to our energy security and social-economic transformation,” Kurti said. “Today, we are not only marking a historic cooperation on shared goals in the energy sector, but we are also celebrating the deeply rooted relations and shared values between our two nations.”

“I applaud the Biden administration’s efforts to meet global challenges, including climate change, which is evident through the new Millennium Challenge Compact we are signing today,” Keating said. “In a time of immense economic and geopolitical pressure due to Russia’s illegal invasion of Ukraine, this Compact represents Kosovo’s Euro-Atlantic future and the strong relationship between Kosovo and the United States.”

Last week, the Democratic congressman attended President Joe Biden’s speech about climate change and clean energy at Brayton Point Power Station in Somerset, Massachusetts. Keating said he was “honored” to be a part of “the largest energy investment in the country’s history” in a tweet.

Kosovo had previously received another $49 million grant in 2018 that was set to expire in September 2022. The previous grant had the support of both former President Donald Trump and Biden at the time.