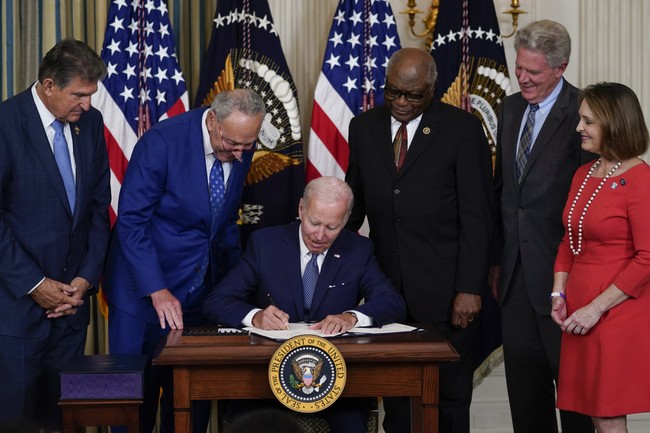 The Republican Party fumbled the ball in 2022. They had hurricane-force political winds at their backs with the struggling economy, rising crime, and runaway inflation rates, and they grossly underperformed. There was a chance to retake the Senate as some races out west significantly narrowed, but for all the momentum the GOP was allegedly accruing, they could barely manage to retake the House.

With no red tsunami rushing into Washington, the best the GOP can do is block anything that reeks of helping Joe Biden for the next two years. In the words of St. Jagger, “You can’t always get what you want,” so the next best thing is gridlock.

With this Democratic Party, Republican members of Congress mustn’t buckle on anything from the Senate. That’s imperative. The liberal media echo chamber is already distributing false talking points about how a divided government means voters want both parties to work together. On what action item can there be common ground? Enhancing public safety is a controversial topic with the left. Besides the issue of sending Ukraine more military assistance, there is very little on the docket where the GOP can work with Democrats, given their left-wing lurch, which was accelerated post-2016.

Before he turned to the dark side, George Will spoke eloquently about how gridlock isn’t an American problem—it’s an American achievement. The longtime Washington Post columnist has spoken at length about how the Constitution ensures many instances where gridlock can ensue: veto, veto override, supermajorities, and judicial review. These mechanisms were set in place to slow the government down, providing a safety net to protect the rights of the people. Efficiency was never a goal when our Founding Fathers drafted the Constitution: it was safety.

When government does nothing, or better yet—can’t do anything, the rights of the people are safe. Ensuring total gridlock is the best we can manage right now, given the GOP’s embarrassing performance during the 2022 midterms. In 2020, the voters didn’t give Democrats a mandate to provide the nation with a Bolshevik makeover. In 2022, while they might have agreed with the GOP’s pitch to roll back a healthy chunk of the Biden agenda, they couldn’t trust some of our candidates, thus denying the GOP with healthy congressional majorities to accomplish that objective.

While things should grind to a halt legislatively, the debate within the GOP about whether Trump is more of an anchor than a buoy for the party will be intense. It seems like a healthy swath of voters opted to back Democrats not because they agreed with their policies—but because they thought the GOP was nuts. I don’t mind the more extremist folks, as they add zest to the rather mundane world of politics, but I am aware that I am the minority voice on that front. Granted, most voters probably didn’t buy into the Democratic Party talking point that voting for the GOP put our nation at risk, but they probably saw the Trump endorsements and thought chaos would ensue. Whether that’s right or wrong is irrelevant. That appears to have been a top concern, and voters, while infuriated over the rising living costs, weren’t willing to gamble on the GOP given the potential for mayhem.

Trump does inject fervor and energy into the GOP base, but it also creates an equally ferocious reaction from Democratic voters, who are lockstep in denying the former president another shot at the Oval Office. Trump shattered the blue wall in the Rust Belt in 2016, but I think he turned off enough voters that he probably can’t do it again. He couldn’t repeat his returns in Michigan, Wisconsin, and Pennsylvania in 2020—why should we expect any difference in 2024? Is that something worth gambling on in the next presidential election?