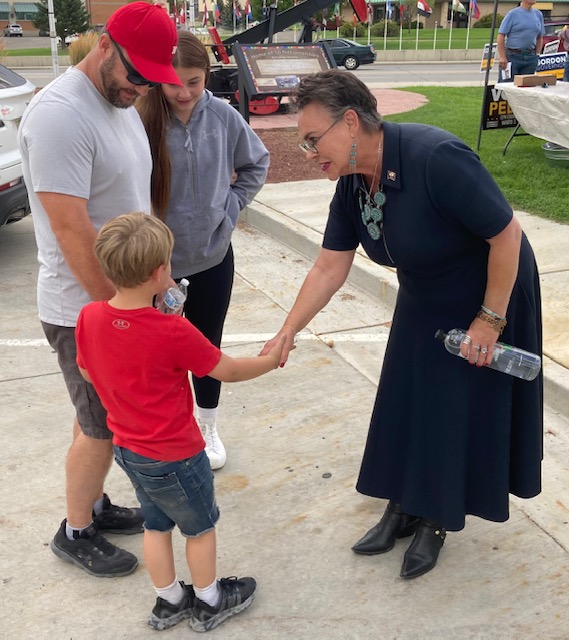 ROCK SPRINGS, Wyo.—The late-afternoon thunderstorm barreled down the chalky face of White Mountain and rolled east into the Red Desert, where it would dissipate and disappear in the expanse of the Great Divide Basin’s sagebrush steppe.

In the blow’s wake returned the sun and the wind—the flag-snapping, bush-bending winds of Wyoming that scrape the land clear of snow in winter and can blow litter along I-80 from Utah 400 miles across the state to Nebraska.

What’s happening in Washington, DC, on the cable news networks, in affairs elsewhere, is figuratively a million miles away from southwest Wyoming’s Sweetwater County, but the people here know which way the wind is blowing.

“I don’t think they like the FBI to be used as a political tool,” said Kolb, who is not up for reelection until 2024. “Wyoming is hyper-Republican. Obviously, people like Trump here.”

More so than any other state. Trump won 70 percent of the vote in Wyoming in 2020, one percentage point more than the state’s lone congressional rep, Rep. Liz Cheney (R-Wyo.), got in winning her second term in 2020.

Cheney is up for reelection, but her odds of returning to Washington appear dim after voting to impeach Trump, serving as co-chair of the Jan. 6 House committee, and being among the former president’s most severe and unrelenting critics.

“A lot of people feel she’s not standing up for us, for our rights,” said Republican state Senate candidate Stacy Jones, noting that when Cheney voted for the compromise gun control bill in June, it was “the second nail in her coffin.”

Sweetwater County Commission candidate Les Mauch wasn’t sure if the Trump raid would have any influence on compelling GOP voters to polls. Republicans were already fired up, he said.

“I think the turnout is already set. People are well-engaged,” Mauch said.

There was a rumor that Cheney would attend the meet-and-greet. Her campaign had canceled participating in a forum in Powell, 300 miles north, scheduled for the same time.

But she was a no-show. And as far as many Wyoming voters are concerned, Cheney has been a no-show for years now. They call her the “Virginian” and snicker that she had to get an out-of-state fishing license to cast a line on her “Wyoming visits.”

But Harriet Hageman, who is running against Cheney in the Republican congressional primary on Aug. 16—and leading in polls by more than 20 percentage points—did show up to shake hands and speak with voters.

While Cheney has avoided forums and public events, choosing instead to meet with supporters at invitation-only affairs often in private homes, Hageman is putting her foot to throttle in the campaign’s waning days.

The natural resources/water rights attorney from Fort Laramie has covered more than 40,000 miles within Wyoming since launching her campaign 11 months ago, visited all 23 counties repeatedly, and will be on the road until Election Day with visits to Pinedale, Jackson, and Cody on her agenda.

Hageman did about two hours of meeting-and-greeting in the chamber’s parking lot—all very casual, all without the stump politicking typical of such events. There were no speeches, just speaking one-on-one or in small groups, as if Hageman were meeting friends she’d known for years, which she was.

Hageman “represented the county in a lawsuit” a while back, Kot said. “She did a great job for us.”

Leesa Kuhlmann, a 40-year career educator and Democrat running for the same senate seat as Stacy Jones, cautioned not to mistake civility as an endorsement.

Even though she’s on the Democratic ballot, on Election Day she’ll be voting Republican—and for Cheney, because of her stand against a former president many Americans view as a threat to democracy.

“I’m not normally a crossover [voter] but this year, it is important that we do,” she said. “There’s much more at stake.”

State Rep. Chad Banks (D-Rock Springs), who is running for reelection, said he hears “there are a lot” of Democrats switching parties to vote for Cheney.

“If there are enough, it could sway it for her,” he said. “It’s an interesting strategy, so much that [state lawmakers] want to change the laws” in Wyoming to close primaries and end what has been a long tradition in the state of crossover voting.

Banks said he’s been “contacted by Liz” with “information on how to switch parties” on Election Day.

But then again, he added, “I’ve received mailers from Harriet as well,” even though he’s a registered Democrat and, as a state lawmaker, a prominent one at that.

Hageman returned enthusiastic waves from cheering folks before pulling out of the parking lot, and rolled on to her next campaign stop. In the Rock Springs Chamber of Commerce, the meeting and greeting continued until dusk.

It was nice to shake hands and chit-chat with Wyoming’s likely next congressional representative, several in the crowd said, but their real interest was in querying those running for city council, county commission, sheriff, assessor, and treasurer.

All politics is local, as they say. And in Wyoming, what’s happening in Washington, DC, on the cable news networks, in affairs elsewhere, is figuratively a million miles away, no matter which way the wind is blowing.