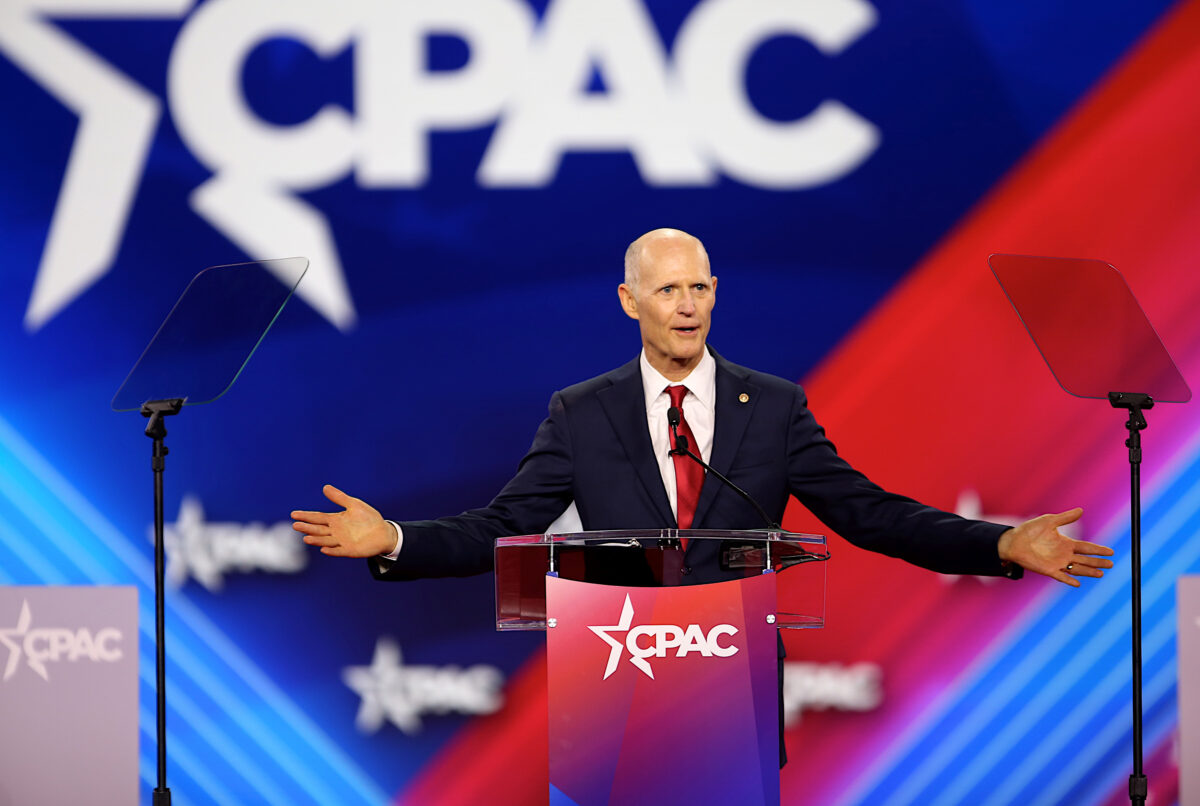 Two Republican Senators gave back-to-back speeches to conservatives in Texas Friday warning that America is under attack from socialists.

Senators Rick Scott (R-Fla.) and Ted Cruz (R-Texas) continued to sound the alarm over the far-left taking hold in America at the Conservative Political Action Conference in Dallas.

At the event’s kickoff on Thursday, Victor Orban, the Hungarian prime minister, told conservatives that his country defeated communism and now America must do the same. Orban said progressives and globalists were just other names for communists.

Scott is chair of the National Republican Senatorial Committee’s efforts to gain control of the U.S. Senate. He told thousands of attendees at CPAC that America faces the most significant threat of a lifetime from the militant left.

“We survived the War of 1812, the Civil War, World War I and II, Korea, Vietnam, and the Cold War, but now, today, we face the greatest danger we’ve ever faced—the militant left-wing in our country has become the enemy from within,” Scott said.

Socialists have seized control of the culture, the economy, and the country, he said, adding America today no longer resembles the country it was just a few short years ago.

Scott said the “woke left” now controls the Democratic Party, the government, media, academia, big tech, Hollywood, most corporate boardrooms, and even some of the top U.S. military leaders.

Socialists are destroying the America created by the Founding Fathers to rebuild it into something unrecognizable. The socialists want to erase history, patriotism, gender, capitalism, free speech, gun ownership, and the nuclear family.

The goal of socialists is to end the American experiment and replace freedom with control. They want to tell people what to think and do. They want to silence all opposition, he said.

“Socialism leads to two things: poverty and oppression,” he said, adding that the left in America acts as though they have just discovered socialism. But history teaches that it has been around for decades and has resulted in the deaths of 100 million people, he said.

President Joe Biden has pushed radical left-wing policies that have resulted in empty shelves, an overrun border, attacks on police, and escalating spending, he said.

To save the United States, vote Republicans back in control, he said. But once won, conservatives need to stop the left in its tracks.

“I believe it’s time to rescue America,” he said. “It’s time to take our country back.”

Scott laid out an 11-point plan to rescue the country on Rescueamerica.com.

The plan starts with children in schools being taught the Pledge of Allegiance and that America is the greatest country in the world. Conservatives must end the left’s racial politics that immorally judge a person based on skin color. The United States needs to treat communist China as a foreign adversary and end our relationship with them, he said.

Other steps include ending voter fraud and making sure prosecutors do their job to punish criminals under the law or get fired. Nations need borders, so America must finish the wall, he said, adding it should be named after Donald J. Trump, which won a roar of approval from the crowd.

Cruz, too, focused on the woke policies of socialists and complemented conservatives packing the room for their patriotism.

“It occurred to me that the Biden FBI believes this is a room of dangerous radicals,” he said. “And you know what? They’re right.”

“There is nothing more dangerous to a bunch of abusive, power-hungry, totalitarian dimwits than a free, empowered, energized American people taking our country back,” Cruz added.

Cruz said America is in crisis, from the out-of-control border in Texas to the price of gasoline. But while Scott took a serious approach, Cruz worked the crowd with humor.

Cruz touched on how Chinese-state-run media stated that if Speaker of the House Nancy Pelosi flew to Taiwan, her plane could come under attack. The White House press secretary responded that the administration had no position on the threat. Cruz said he’s no fan of Pelosi’s, but the only correct answer to China’s threat would be to call it an act of war.

But even with all the woke threats to America, Cruz said a revival was coming. He predicted a tsunami in November, not just a red wave because people are now aware of the threat.

Cruz praised the young conservatives in the crowd, saying many must endure woke, communist professors who force them to introduce themselves using pronouns.

“Well, my name is Ted Cruz, and my pronouns are: Kiss my ass,” he said to wild cheers. “It is powerful how people’s eyes are open.”

Cruz said conservatives need to stand up to every “dumbass” idea that Biden and the Democrats come up with.

Part of fighting the socialists is campaigning for real conservatives nonstop, he said, adding that winning control of the Senate and House of Representatives is vital.

He fired up the crowd by telling them that they were a threat to Democrats.

“You are the dangerous radicals like the men who signed the Declaration of Independence,” he said. “Like the Framers, like those who died at the Alamo.”

“And I’m here to tell you that together we are going to restore that shining city on the hill that is the United States of America,” Cruz said.