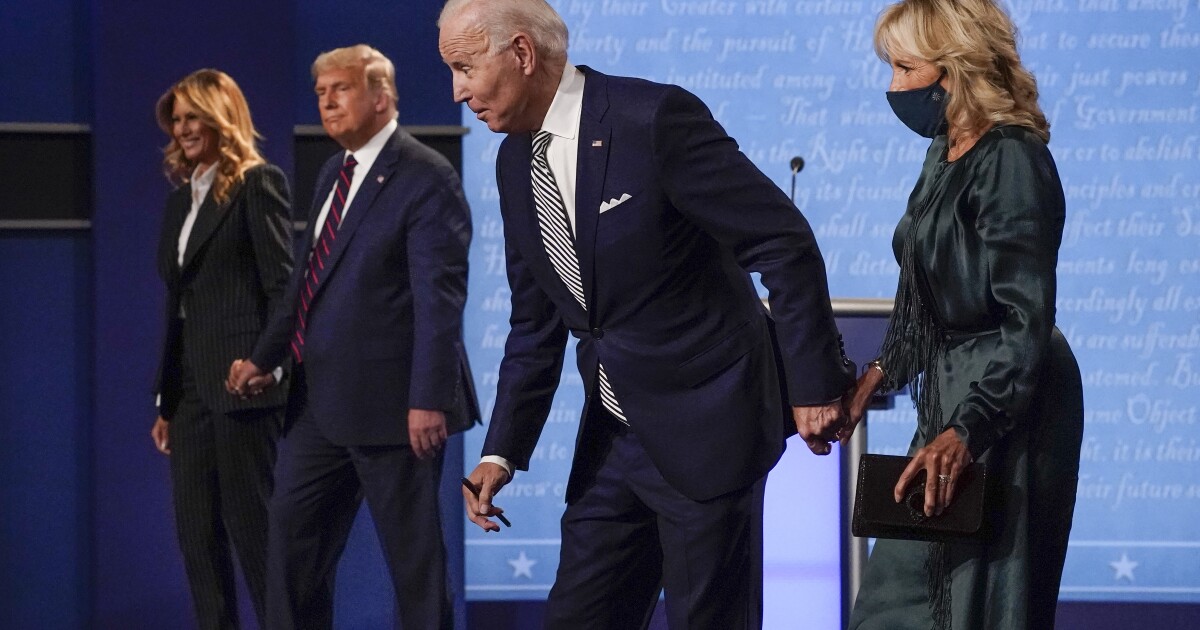 A slew of just-published polls spell bad news for both President Joe Biden and former President Donald Trump: The overwhelming majority of people don’t want to see either run for president in 2024.

A Tuesday poll from Morning Consult and Politico found that only 29% of over 2,000 respondents thought the president should run for reelection, compared to 64% who said he shouldn’t. That comes just days after the New York Times saddled Biden with his lowest approval rating yet, 33%, in a poll that also found 64% of Democrats, including 94% of Democrats under 30, hoping for a new nominee in 2024. The poll did give Biden a slight 3-point advantage over Trump in a head-to-head matchup.

DEMOCRATS POSITION THEMSELVES TO RUN AGAINST BIDEN IN 2024

Poll respondents pointed to Biden’s age as their chief concern, followed closely by his actual performance thus far as president.

Senior Democratic officials have worried for months that Biden’s inability to advance liberal proposals, ranging from voting rights to an ambitious social spending bill, would drive down turnout among younger voters in particular. Those fears reemerged after Biden’s response to the Supreme Court overturning Roe v. Wade was deemed by many activists to be wholly insufficient. The names of possible primary challengers began to be bandied about.

Meanwhile, the White House predicted Tuesday that headline inflation would rise to 8.6% for June after months of polling had firmly identified the economy as voters’ top issue heading into the next election.

Trump has similar problems. Fully 61% told Morning Consult that the former GOP president should not run again in 2024, with just 35% believing he should seek another term in the White House.

Trump’s loosening grip on the GOP would appear to be a consequence of the nationally televised Jan. 6 hearings. The testimony of former Trump White House aide Cassidy Hutchinson in particular has appeared to shift sentiment among some Republican voters. The new Morning Consult poll, taken from July 8-10, found that 66% of voters believed Trump tried to overturn the results of the election, 66% believe he didn’t provide adequate evidence to back up his election fraud claims, and 59% believe he outright lied to the nation about the election results.

Furthermore, 44% of Republicans now say Trump lied about the election results, a 7-point bump compared to late June. Sixty percent of Republicans do maintain that Trump is not responsible for the events of Jan. 6.

The former president predictably responded to the New York Times’s Tuesday findings in a lengthy email sent to supporters and press.

“The failing New York Times is down 40% year-to-date because they are Fake News. Their reporters are dishonest, and their front page has become a work of total fiction, not news. They hate our Country, and they hate reporting the truth, which is why America is not respected and our Nation has never been weaker,” his statement reads. “Instead, they obsess over January 6, just like they did over Impeachment Hoax #1, Impeachment Hoax #2, the Mueller Witch Hunt, and Russia, Russia, Russia. The New York Times will continue to decline because people no longer believe their reporting is even close to being true. Fake polls, phony stories, and made up quotes —they are a disgrace to journalism and have set it back many many years. THE NEW YORK TIMES IS TRULY THE ENEMY OF THE PEOPLE!”

However, a number of high-ranking Republican politicians have reacted less than enthusiastically about another Trump campaign next cycle.

One GOP congressman told the Washington Examiner that Trump running would allow Democrats to distract from Biden’s poor performance as president.

“I think there’s great respect and a love for the policies, right, but I think … there’s the kind of, like, the raw realization that if he’s in the race, the race is about him,” that person explained. “That’s what Democrats will make it. That’s what the press will make it — he’ll make it about him.”

Several GOP lawmakers are worried that Trump announcing his reelection bid before November could jeopardize Republicans taking back both chambers of Congress in 2022’s midterm elections.

“The political landscape and environment is favorable. And I think the fewer disruptions, obviously, the better,” Senate Minority Whip John Thune (R-SD) said Monday. “Anything you have that takes you off of what your message is, or creates distractions, is obviously something you’d have to adapt to.”

Sen. Chuck Grassley (R-IA) said he doesn’t “even want to think about the presidential election until after the midterms.”

“We’ve got 330 million people, and who knows who’s going to start talking about ‘24,” McConnell continued. “It seems to me the American people are focused on ‘22 and ought to be because that is the next election, and they’re going to send an important signal about which way they might want to go in ’24 in November ’22.”