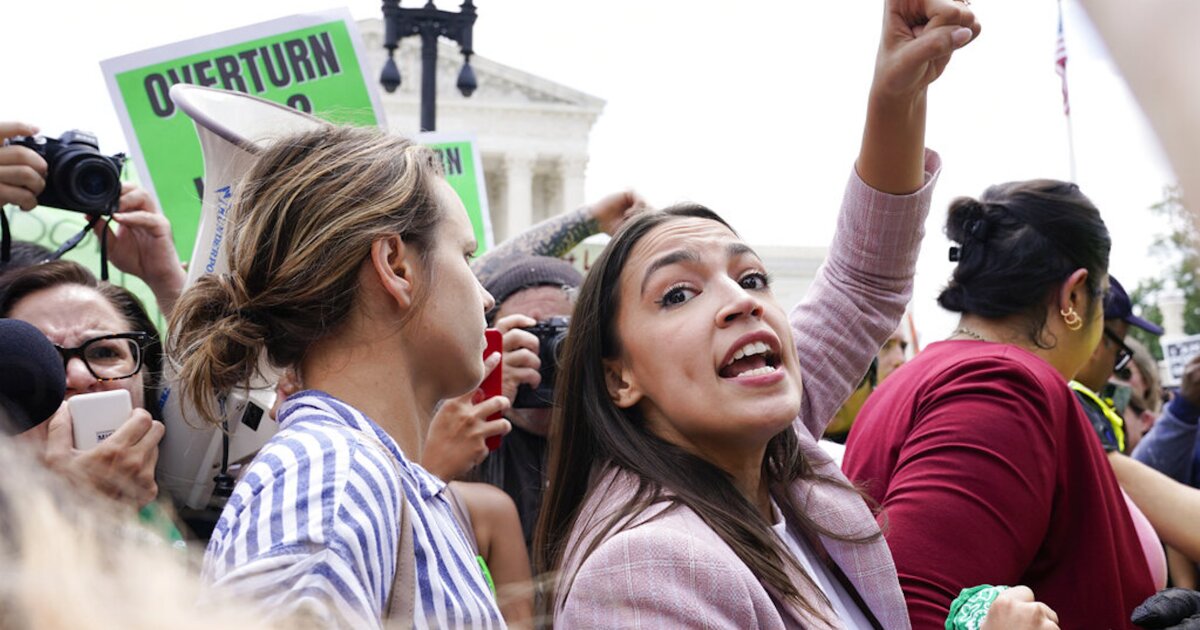 Rep. Alexandria Ocasio-Cortez (D-NY) called for “every option to be on the table” to stop the “rogue” Supreme Court in response to the landmark decision ruling that women do not have a constitutional right to an abortion.

Even “impeachment should be on the table,” Ocasio-Cortez said, pointing to recent statements from Susan Collins (R-ME) and Joe Manchin (D-WV) suggesting they were misled by the testimony of Justices Neil Gorsuch and Brett Kavanaugh during their Senate confirmation hearings and private meetings that Roe v. Wade was “settled law.”

Ocasio-Cortez has not shied away from her repeated calls for strict actions against several of the high court’s Republican-appointed justices, particularly her calls for Justice Clarence Thomas to be “impeached and removed from the high court over his wife Ginni Thomas’ political activities,” referencing his spouse’s support of former President Donald Trump’s election fraud claims.

Our Constitutional Republic cannot tolerate Supreme Court Justices who lied in order to get confirmed. The legitimacy of the Court is at stake.

Letter from @AOC and me requesting the Senate to make a finding on whether Justices Kavanaugh and Gorsuch lied to the American people. pic.twitter.com/snQQf2cVKm

A letter from Ocasio-Cortez and Rep. Ted Lieu (D-CA) was sent to the Senate Monday urging a finding on whether Gorsuch or Kavanaugh lied during the Senate confirmation hearings regarding the subject of Roe.

“We respect the right of individual Justices to have their own views on various constitutional issues. But we cannot have a system where Justices lie about their views in order to get confirmed. That makes a mockery of the confirmation power, and of the separation of powers,” the pair of Democrats wrote to Senate Majority Leader Chuck Schumer (D-NY).

But on Sunday, Senate Majority Whip Dick Durbin (D-IL), who also leads the Senate Judiciary Committee, dismissed suggestions from members of his party to impeach Supreme Court Thomas as “not realistic.”

Thomas, the eldest associate justice, was lambasted over the revelation about his wife, which came after he was the only member of the high court to dissent in a case relating to the Jan. 6 Capitol riot investigation. The case centered on a request by the former president to prevent the release of White House records to the House select committee probing the matter.

Thomas wrote on June 24 in a concurring opinion while voting to overturn Roe, which no other justices signed, that the court should “correct the error” of rulings that protect same-sex marriage and contraception access. Like with Roe, those cases fell under previous due process precedents.

Despite calls by Democratic lawmakers to impeach several Republican-appointed justices, experts say it would be nearly impossible to remove a sitting Supreme Court member for many reasons, mainly the lack of votes needed to fulfill such a task in the narrowly divided Senate.

Additionally, the only high court justice to have been impeached was Justice Samuel Chase in 1805 for conduct on the bench that was deemed overly partisan. He was subsequently acquitted by the Senate.

“To me, their careful lawyerly phrasing was itself a demonstration that they were prepared to overturn Roe,” Northeastern University law professor Dan Urman told the school’s news publication last month. “If they were not, then they could have given a more direct and less careful answer.”

“I don’t think any of them committed perjury in the technical legal sense of the word because they stayed general enough, and descriptive enough, of the law at the time they were nominated,” Urman added.