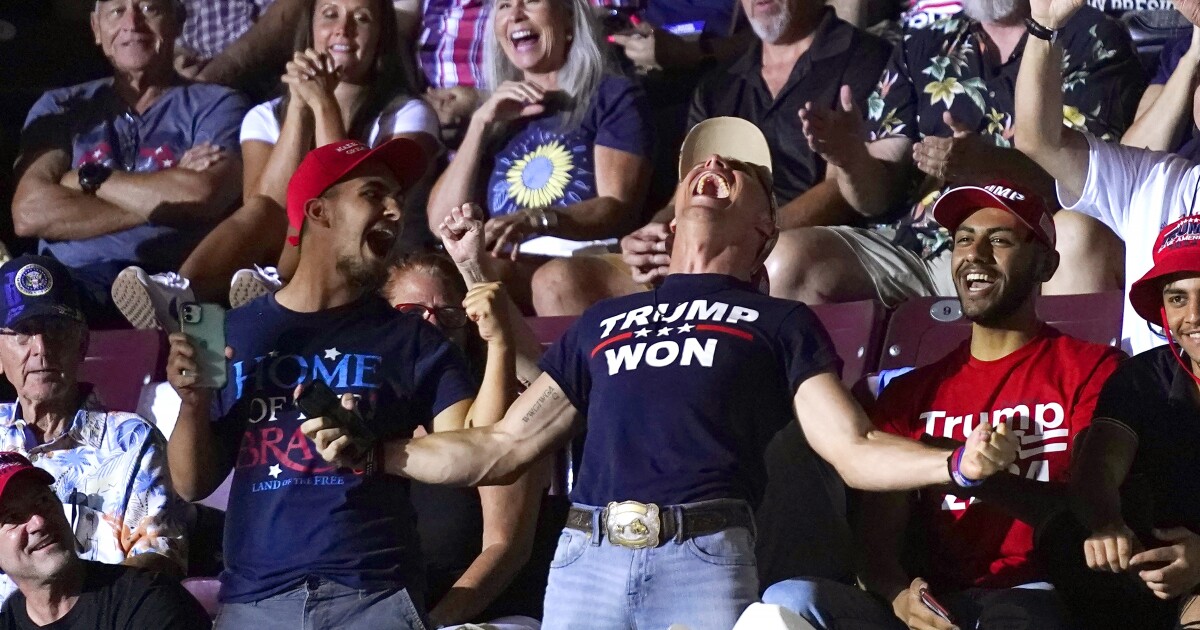 A typically low-key race for Arizona attorney general is set to take on a newfound sense of importance after Republicans chose a political novice turned right-wing firebrand as the party’s nominee in Tuesday’s primary.

Abraham Hamadeh, who campaigned on a staunchly conservative platform and received former President Donald Trump’s endorsement, handily defeated a slate of more experienced candidates, including a former Arizona Supreme Court justice, to secure the Republican nomination to be the Grand Canyon State’s chief legal officer. He won the primary largely by closely allying himself with the former president, soundly rejecting the centrist, business-friendly image long associated with Arizona Republicans, and staking out hard-line positions on abortion, elections, and voting rules, among other topics popular with the GOP’s base.

But Hamadeh’s rapid political rise has alarmed Democrats, who see him as committed to reinstating historical abortion bans, including a strict 1864 law that would allow abortion doctors to be prosecuted with prison time, while also pursuing legislative and legal efforts to call the 2020 election’s legitimacy into question. While Mark Brnovich, the incumbent Republican attorney general who lost his primary for Arizona’s open Senate seat on Tuesday, has already begun efforts to reinstate the 1864 law and other historical abortion restrictions in the aftermath of the Supreme Court’s June decision to overturn Roe v. Wade, he has been an opponent of efforts to question the 2020 election and incurred Trump’s wrath for refusing to aid the former president’s efforts to have Arizona’s election results overturned.

Hamadeh, on the other hand, has firmly aligned himself with Kari Lake and Mark Finchem, the Arizona GOP’s hard-right nominees for governor and secretary of state, respectively, who have both repeatedly rejected the results of the 2020 election. He has also pledged to “prosecute the crimes of the rigged 2020 election” if elected and has seemingly endorsed efforts to “decertify” his state’s 2020 presidential electors. While it’s highly unlikely that Hamadeh will be able to follow through on any pledge to prosecute election officials or “decertify” 2020 electors even if elected, his highly controversial views have transformed the general election into an uncompromising ideological contest that will leave voters with two wildly divergent choices at the ballot box, and is set to have hugely significant implications for law enforcement in Arizona.

Hamadeh, a former Maricopa County prosecutor and Army intelligence officer, will face Democrat Kris Mayes in November’s general election. Mayes won the Democratic nomination uncontested on Tuesday after state Democrats coalesced behind her candidacy. It’s difficult to underscore how different Mayes, a former chairwoman of the Arizona Corporation Commission, is in both style and substance to Hamadeh. In contrast to Hamadeh, who backs restricting abortion from conception, Mayes has alleged that the right to abortion is protected under Arizona’s state constitution, has rejected Gov. Doug Ducey’s recently enacted 15-week abortion ban, and has claimed that prosecuting abortion doctors under the 1864 statute would be “unconstitutional.”

Mayes has also argued that the general election would be tantamount to a referendum on “democracy,” citing Hamadeh’s support for curbing mail-in voting and his unevidenced theories about the 2020 election. She has even said that, if elected, she would refuse to enforce duly enacted state laws restricting abortion.

While much of Arizona’s attention is fixed on headline-dominating contests at the top of the ticket, the race for attorney general is sure to have an outsize impact on the direction that the state takes on a series of controversial issues, abortion and elections chief among them. And the race for Arizona attorney general is just one of several high-profile examples of how the comparatively centrist, congenial, deal-making attitudes along the lines of Ducey and Sen. John McCain that once defined statewide politics in the Grand Canyon State are nowhere to be found, at least for now.