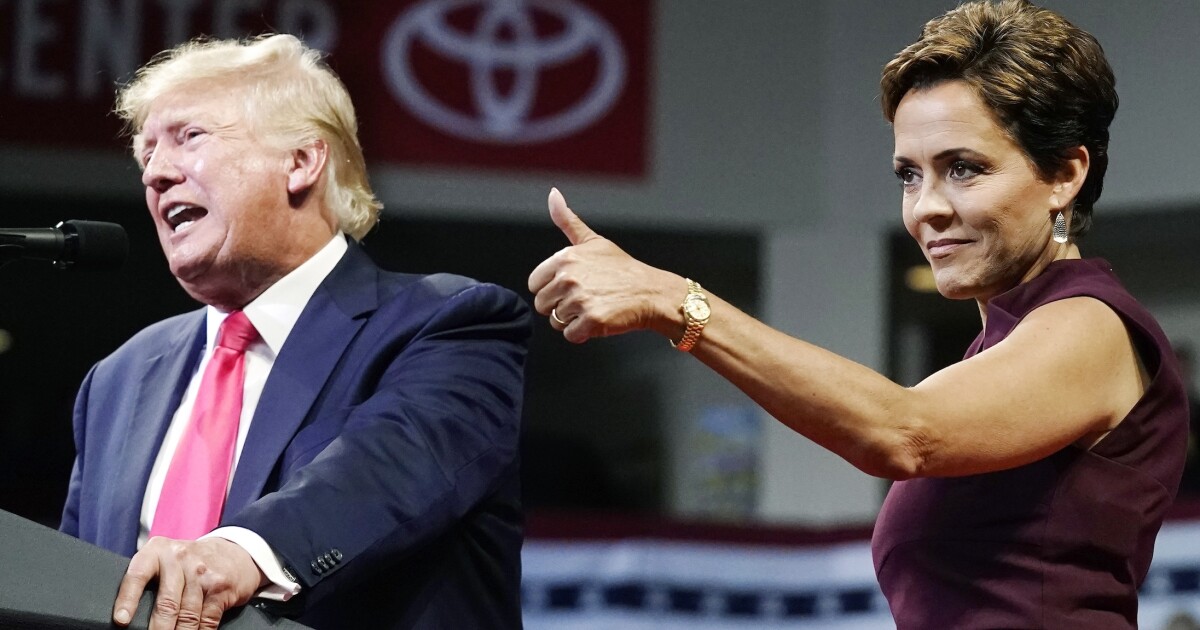 SCOTTSDALE, Arizona — Kari Lake was all smiles during a brutal 120-degree summer scorcher. The former local television news anchor prepared for a massive mid-July rally headlined by former President Donald Trump. The GOP gubernatorial candidate needed a boost from Trump’s MAGA base to pull out a primary win over her better-funded challenger, Karrin Taylor Robson, a member of the state university system’s board of regents and a pillar of Arizona’s establishment business community.

The pair of first-time candidates had similar conservative talking points on immigration, jobs, and the economy. But only one issue seemed to matter to the Trump rally crowd — the former president’s claims, without evidence, that he had been cheated out of a second term. Lake, at the Trump rally and throughout her gubernatorial primary bid, gave full-throated support to the notion that President Joe Biden wrongly made it to the White House.

And it worked, as Lake won the Aug. 2 primary over Taylor Robson, who sported endorsements from GOP heavyweights such as former Vice President Mike Pence and retiring Arizona Gov. Doug Ducey.

Lake has made 2020 election conspiracy theories a central theme of her fall campaign against Democratic nominee Katie Hobbs, Arizona’s secretary of state. And Lake is hardly alone, as Arizona Republican statewide candidates have taken up the “stolen election” mantle.

Whether election fraud claims dating back nearly two years are an effective tactic in Arizona, a longtime Republican redoubt that has become decidedly purple, is an open question. After all, Biden in 2020 became only the second Democratic presidential nominee in 72 years to win Arizona. The state also has two Democratic senators (Kelly and Sen. Kyrsten Sinema) for the first time since the early 1950s. And Democrats have a 5-4 edge in the House delegation Arizona sends to Washington, D.C.

Arizona is rapidly diversifying politically, with Latino voters growing in electoral strength, but also through an influx of professional-class workers from other parts of the country who are increasingly voting Democratic.

“Republicans are struggling in this general election to appeal to swing voters,” Arizona-based pollster Paul Bentz told the Washington Examiner. “Midterms in Arizona are generally very good for Republicans. But they need to appeal to independent and unaffiliated voters to win statewide office — and independents are not big believers in election fraud.”

Nevertheless, “election integrity” arguments have the potential to fire up the Republican base. That’s on top of built-in advantages Republicans have in the midterm elections. The “out of power” party (in this case, the Republicans) almost always picks up seats. Moreover, Biden and Democrats nationally have been on the defensive over the worst inflation in 40 years, stubbornly high gas prices, and a slew of other voter concerns.

Whichever way Arizona goes, it’s likely to be an electoral bellwether for the rest of the country. Nearly two years into Biden’s term as president, the control of the Senate and the House are both up for grabs. Thirty-six governor races are on state ballots in 2022, along with scores of contests for other state and local offices. Which party wins in November in Arizona will undoubtedly influence the trajectory of politics in the United States heading into the 2024 presidential race, Bentz said.

Each Arizona statewide Republican nominee says Biden should not have been certified as the winner, even though he beat Trump 49.36% to 49.06%, by 10,457 votes. GOP centrist and establishment types say it’s time to move on. But Trump-backed candidates who have centered their entire campaigns on the issue are digging in and, for the most part, refusing to pivot.

GOP gubernatorial nominee Lake and Finchem, the Republican secretary of state standard-bearer, have been the most vocal on alleged election fraud and are running full Trumpist campaigns. Lake, during a speech in a church, referenced some of Trump’s most controversial claims about the porous U.S.-Mexico border, which includes 372.5 miles in Arizona, going back to his 2015 presidential campaign launch.

“The media might have a field day with this one, but I’m just going to repeat something President Trump said a long time ago and it got him into a lot of trouble,” Lake said from behind the pulpit. Migrants from Mexico, she asserted, “are bringing drugs. They are bringing crime. And they are rapists, and that’s who’s coming across our border. That’s a fact.”

Lake’s campaign, also on Sept. 16, tweeted a clip of her saying at a campaign rally, “We are truly fighting pure evil right now. It is EVIL, what we’re dealing with in this world. It’s coming from the left, it’s coming from their spokespeople in the media, we all know it.”

Lake then added in agreement to an audience member’s shout, “The Media is the virus.”

If Finchem, a prominent member of the “Stop the Steal” movement, can beat Democratic challenger Fontes, he will oversee the state’s voting system for the 2024 presidential election. In recent weeks, Finchem has held firm to claims the 2020 election was rigged. Finchem has gone so far as to accuse Pence of manipulating the 2022 primaries to set himself up for a 2024 presidential run against Trump, his former boss in the White House.

Donning his iconic cowboy hat, as well as a red shirt reading “#ProveIt,” Finchem in mid-September told the group United Patriots out of Mesa, Arizona, that Pence orchestrated a coup on Jan. 6, 2021, when rioters breached the Capitol. Finchem further accused Pence of betraying Trump “at the very moment [he] should have stood beside him.”

MAGA Republicans in Arizona have already claimed one prominent political scalp, from their own side no less. State House Speaker Rusty Bowers is an ardent conservative on public policy issues whom Trump nonetheless targeted in a post-Election Day call late in 2020. Trump’s goal was to prevent the certification of Arizona’s electors for Biden.

Bowers refused Trump’s demands, the lawmaker testified to the House Jan. 6 committee over the summer. That instantly made Bowers a pariah to fellow Republicans, and he lost an Aug. 2 bid for the GOP nomination in an open state Senate district.

Candidates who didn’t breathe oxygen into Trump’s election fraud claims in Arizona were criticized as being unpatriotic and, in the case of Bowers, censured and shamed. That came after the Arizona GOP Executive Committee censured Bowers for having “lost the confidence of a majority of the Republican Party leaders and his colleagues in the legislature in the state of Arizona.” And state GOP Chairwoman Kelli Ward subjected the sitting state House speaker to grade-school bullying and referred to him as “Rusty Bowels” on social media.

Despite the focus on the 2020 elections, Republicans could score big in Arizona. If Biden’s approval ratings remain low and the Republicans do well nationally in November, as the opposition party to the president usually does, Arizona GOP nominees could sweep statewide offices.