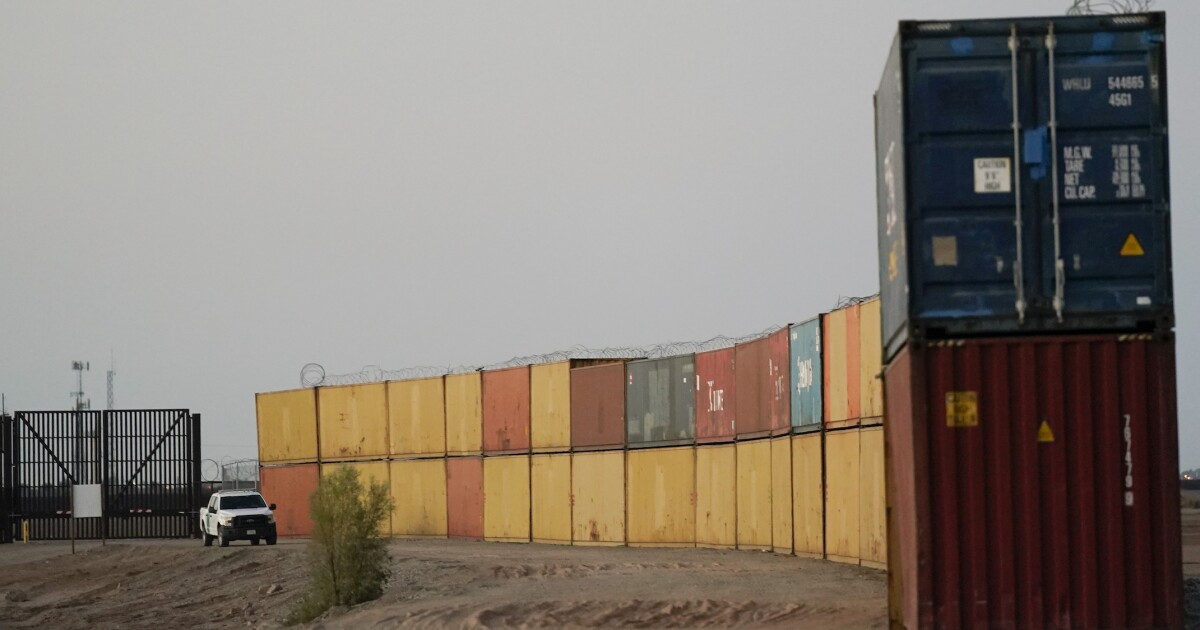 Republican-led Arizona has sued the Biden administration over a state-installed border barrier with Mexico, a major move meant to settle in court whether states have the legal authority to defend themselves absent federal help.

Gov. Doug Ducey (R-AZ) announced Friday afternoon that the state has filed a federal lawsuit in the U.S. District Court for the District of Arizona, asking a judge to intervene in its fight with Washington Democrats over less than a mile of shipping containers that the state installed on the border in August.

“Our border communities are overwhelmed by illegal activity as a result of the Biden administration’s failure to secure the southern border,” Ducey said in a statement.

“Arizona is taking action to protest on behalf of our citizens,” Ducey continued. “With this lawsuit, we’re pushing back against efforts by federal bureaucrats to reverse the progress we’ve made. The safety and security of Arizona and its citizens must not be ignored. Arizona is going to do the job that Joe Biden refuses to do — secure the border in any way we can. We’re not backing down.”

Ducey’s action comes during a week of back and forth with the federal government. The outright refusal on Arizona’s part to remove the shipping containers is the latest move in a game of chess between state and federal officials over border security, a matter that is the responsibility of the federal government.

ARIZONA TELLS BIDEN IT WON’T TEAR DOWN ITS BORDER WALL

Shortly after President Joe Biden took office in January 2021, the number of noncitizens encountered at the border attempting to enter the country illegally spiked. On top of the rising number of people crossing, border wall projects funded during the Trump administration were canceled, leaving gaps between walls up and down the 2,000-mile-long border.

In the year and a half since then, arrests of illegal immigrants have soared in Arizona’s border city of Yuma. The Ducey administration had waited for the federal government to fill in the gaps, but by mid-2022, Arizona took action to close them.

Over 11 days in August, construction crews installed stacks of shipping containers in the wall’s gaps to block Mexican cartels from smuggling people and drugs into the country.

The Biden administration did not respond until last week. The Interior Department’s Bureau of Reclamation on Oct. 13 ordered the containers be cleared out, claiming they violated U.S. law and were not approved to be placed on federal land.

The state’s response on Tuesday chided Bureau of Reclamation Regional Director Jacklynn Gould for her office’s lack of knowledge about its claims that the federal government was in the process of filling in the gaps. Sen. Mark Kelly (D-AZ) has also touted his pressuring the Biden administration to fill in the gaps as being a success, but the government has yet to begin construction.

On Tuesday, a federal government official from the Border Patrol sent a generic letter to the state alerting officials of its intention to close four gaps in the border wall, according to a copy of the letter obtained by the Washington Examiner.

Shelly Barnes, the environmental planning lead within the Border Patrol’s program management office, said the government would use “temporary mesh fencing and mechanized bollard vehicle gates” in place of the shipping containers and that it would start in early 2023.

“Why replace temporary barriers with more temporary barriers? Just another example of the federal government bureaucracy and out-of-control spending,” Ducey said Friday. “The border barrier works, and we’re not going to delay the safety of our citizens any longer.”

The state has defended installing the shipping containers on federal land on the basis that it is an exemption from federal law.

“Now is not the time to hold or spend precious resources on replacing a barrier that already works,” Jonathan Lines, a Yuma County supervisor, said in a statement. “Governor Ducey has taken action in the interest of public safety and basic humanity. The federal government has not acted whatsoever and is so entrenched in bureaucracy, it’s putting its own citizens at risk.”

State Rep. Tim Dunn, a Republican, said Border Patrol has confirmed that the containers assisted agents in “gaining operational control” of the region.

“Farmers are thankful the barrier [has] stopped unfettered trespassing into Yuma farm fields,” Dunn said in a statement. “Arizona stepped up to the plate, and we will continue to protect our communities while the Biden administration does nothing.”

Ducey is term-limited and not running for reelection next month. Republican gubernatorial nominee Kari Lake has vowed strong action against the Biden administration to defend the Arizona border.