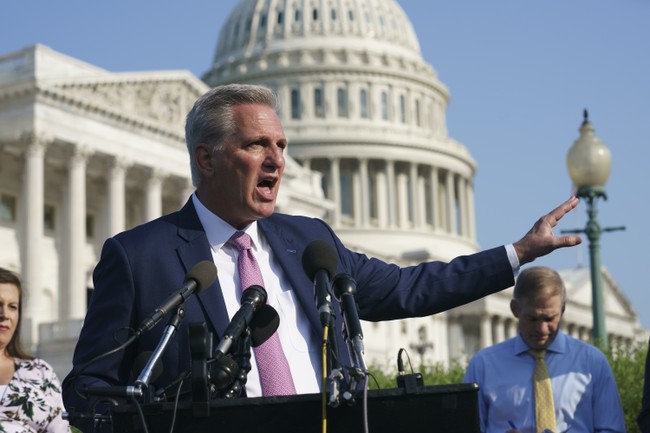 OK, Republicans, you have the House of Representatives. Now, do something with it.

No, you can’t get any laws enacted by yourself. The Democratic Senate will block your every attempt. But you CAN attack, you CAN go on the offensive, you CAN let the American people know you are trying to solve America’s problems. Get with it. Do what the people who elected you want you to do. Attack, attack some more, and don’t stop attacking. Never stop attacking. Put Biden and the Democrats on the defensive.

I have several suggestions for bills you Republicans can pass through the House of Representatives. This will make good cannon fodder for the 2024 campaign. “Here’s what we Republicans in the House passed, but the Democrats in the Senate didn’t agree to.” No more Mr. Nice Guy, we are tired of that, we want action to save our country from the Democrats who are trying to destroy it.

Oh. Investigate Hunter Biden and impeach Mayorkas and Garland while doing these things. Maybe Joe, too.

1. “The 87,000 New Police Bill.” Take the money that was going to be wasted on IRS agents and offer it to cities who want more police. The country as a whole may or may not require 87,000 new police (though Democratic-run cities alone probably need more than that), but we certainly don’t need 87,000 new IRS agents.

2. The “Build the Wall Act.” I’ve got several ideas for a border wall. Either a three-feet thick, 50-foot-high steel fence with razor wire at the top, or a 50-foot-high electric fence. Don’t make the electric shock lethal, just enough to boot some illegal immigrant’s butt all the way back across the Rio Grande. Or, we can build two fences—one right on the border with guard towers every half-mile that have searchlights for night hunting. Another one hundreds of yards inland from that fence, with more searchlights. In between the two fences, barbed wire could be so thickly strewn that nobody could get through it. Any money that Biden wants to waste in Ukraine could be given to soldiers manning this wall, in other words, doing their job of protecting our country.

3. The “Restore Energy Independence Act.” Pass a bill to restart the Keystone Pipeline. And let oil and gas companies start drilling again. And build more coal plants. Instead of providing federal subsidies for useless wind and solar power plants, use that money, if needed, to subsidize energy we need right now. Gasoline prices will soon start to fall and people won’t freeze to death in the winter.

4. The “Ten Percent Electric Cars by 3035 Act.” Just to show how “democratic” you are, throw a sop to the Greenies. Not long ago, Biden said something about having a lot of electric cars by 2035. Ok, that’s fine. To show you are all on board for renewables, the new law can aim, by 3035, to have 10% of the cars on the road be electric. 1,000 years should be enough time for the R&D necessary to do it.

5. The “Protect Our Children Act.” No sex education until high school—and only with parental consent. No pornographic books in ANY American educational institution. No “gender change” surgery for any child under the age of 21. Any doctor who performs such surgery will be imprisoned for life. He or she can do gender-changing surgery for criminals in prison.

6. The “Round Up: Head ‘Em Up, Move ‘Em Out Act.” Start gathering the people who are illegally in the country and send them back home. Rather than giving them a free flight to Martha’s Vineyard, give them a free flight back to Caracas, or wherever they came from. If they want to come to America, they are welcome to go through the legal process that will allow them to do so. We are a nation of immigrants, and we invite people from all over the world to come, as long as they do it legally. Otherwise, get them out.

7. The “Restore American Manufacturing Act.” Pass a bill that gives a 10-year moratorium on taxes—no taxes at all for that period of time—to anybody who opens a manufacturing plant to produce goods that we are now buying with Communist Chinese slave labor. This absence of taxes will allow these companies to produce their goods at a reasonable cost, and within 10 years, they should be proficient and productive enough to keep their costs low. It’s time we quit building the Chinese military and economy.

8. And speaking of the military, pass a “Save Our Military Act.” No more “white supremacy” indoctrination garbage. We train our troops how to fight. Period. That is what the military is for, not social engineering. Give Americans this law and watch recruitment figures shoot up again (no pun intended). A few forced retirements would help, too.

Get after it, McCarthy. Show us you have some backbone. That you love America. Pass those bills and then get ready for fun in 2024 when Democrats will have to defend why they oppose all these pro-American, pro-growth, pro-children, pro-decency measures.

Christmas is coming! My 2nd Rob Conners western novel, River Bend, is now available. Honestly, I think it is much better than my first book, Whitewater. Both are available at Amazon, Barnes and Noble, and Eliva.com. Get a 10% discount on the paperback at info@elivapress.com. And read some different posts on my blog at thailandlewis.blogspot.com.