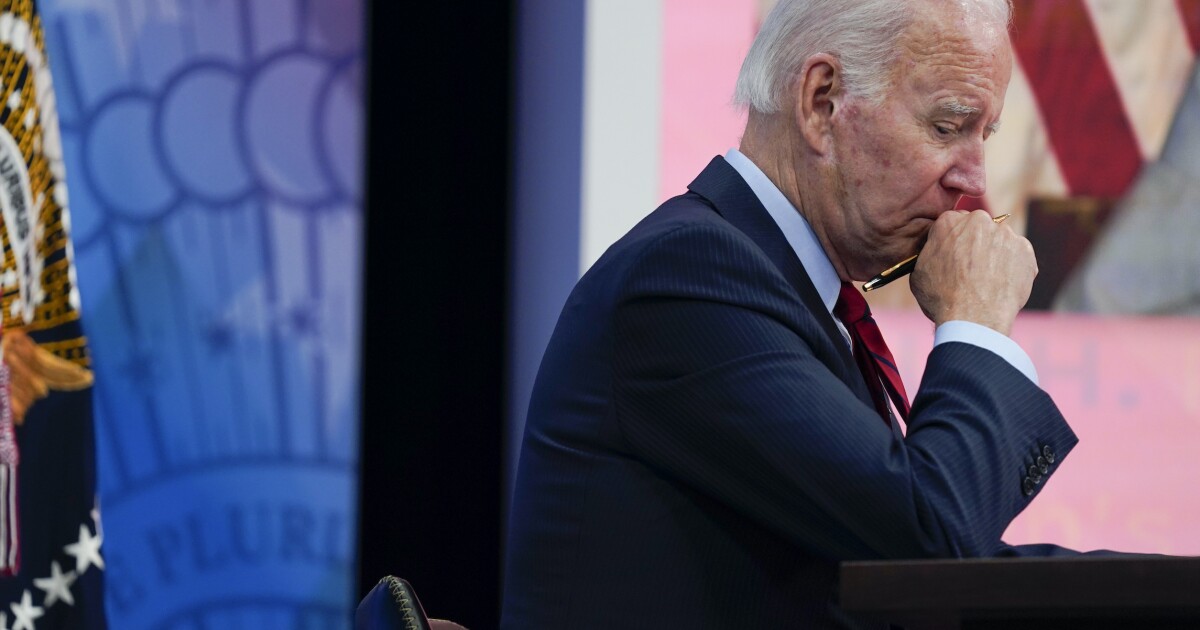 The White House is channeling Al Jolson and Bachman-Turner Overdrive in reassuring liberal activists about abortion following the Supreme Court’s reversal of Roe v . Wade: You ain’t seen nothing yet.

To abortion rights supporters, that is exactly the problem.

“The president is not done speaking on how he is going to fight for women’s freedoms and women’s rights,” White House press secretary Karine Jean-Pierre told reporters on Thursday. “I can assure you you will hear more from him.”

Asked about upcoming executive action on abortion from President Joe Biden, Jean-Pierre said “in a short order, he will speak to this himself. I’m not going to get ahead of the president.” The White House added a speech on “protecting access to reproductive health care services” to Biden’s public schedule for Friday morning.

But it’s become a familiar routine. “This president is fighting for women’s rights. He’s fighting for women’s freedom. He has spoken out. He’s been very clear about what needs to happen next,” Jean-Pierre said on Tuesday. “He put out two executive authorities that lays out ways that we can protect women.”

Still, the White House is putting the onus on Congress and the voters themselves as the midterm elections approach.

“But he also has spoken very truthfully and very honestly with the American people, which is: If we want to see Roe become the law of the land, we also have to act,” Jean-Pierre continued. “We have to hold Congress accountable and make sure that they act and that that cannot happen. Then Americans need to go to the ballot box.”

Despite activist pressure, the Biden administration has few legal options to ensure abortion remains widely available in states that move to ban the procedure following the Supreme Court decision. With narrow congressional majorities and little appetite to change filibuster rules in the 50-50 Senate, legislative solutions also seem to be mostly off the table.

Still, the White House keeps teasing executive action even as it signals the real answer is to elect more pro-choice Democrats in November. They had significant advance notice when the majority opinion in Dobbs v. Jackson Women’s Health Center leaked in May.

Liberals were incensed to read reports that White House counsel Dana Remus told aides the court wouldn’t rule on abortion the day Dobbs was handed down. Or that a Biden press aide assigned to the issue was on a coffee run when the news broke that Roe had been overturned. It was known in advance that it was a Supreme Court opinion day and the ruling was issued at the normal time.

Some of the proposed actions may not be practical, however. Setting up abortion clinics on federal land in red states is one idea that has found favor on the Left. But it would take time to set up the proper medical facilities. A future Republican administration could shut them down. And the plan could create legal exposure for people who use or work at these federal abortion providers.

“We understand the proposal is well-intentioned, but here’s the thing: It could actually put women and providers at risk,” Jean-Pierre told reporters at a press gaggle last month. “And importantly, in states where abortion is now illegal, women and providers who are not federal employees — as you look at the federal lands could… potentially be prosecuted.”

Congressional Democrats have been slow to embrace abortion legislation that could potentially achieve bipartisan support in the Senate and force conservative Republicans to take controversial positions and block such measures through the filibuster.

Instead, Democratic majorities have held show votes on legislation that goes beyond Roe and cannot win simple majority support in the Senate. At least two Republicans and the chamber’s least liberal Democrat have signaled they would back a more limited bill after voting to reject the one Senate Majority Leader Chuck Schumer (D-NY) brought to the floor with Biden’s blessing.

During the 1980s, Biden himself favored a constitutional amendment sending abortion policy back to the states, as Dobbs has now done. He continued to support the Hyde Amendment, which bans most federal funding of abortion, as recently as 2019. Unlike some of his aides, including former White House press secretary Jen Psaki, he has hesitated to use the word “abortion” when discussing his current position.

These facts have made Biden, the second Catholic president, suspect to some abortion hardliners.

“There’s a lot of frustration of why weren’t those orders deliberated and decided and ready to roll out at a faster pace, and here we are, about two weeks later, talking about when that next wave might come out,” a reporter asked Jean-Pierre on Tuesday, noting “that you had this unprecedented situation of more than a month of knowing pretty much what was going to be, likely, in the ruling.”

“We understand… the frustration,” Biden’s top spokeswoman replied. She later added, “And what we saw a couple of weeks ago is not — almost two weeks ago — is not — is not the end. It is only the beginning.”