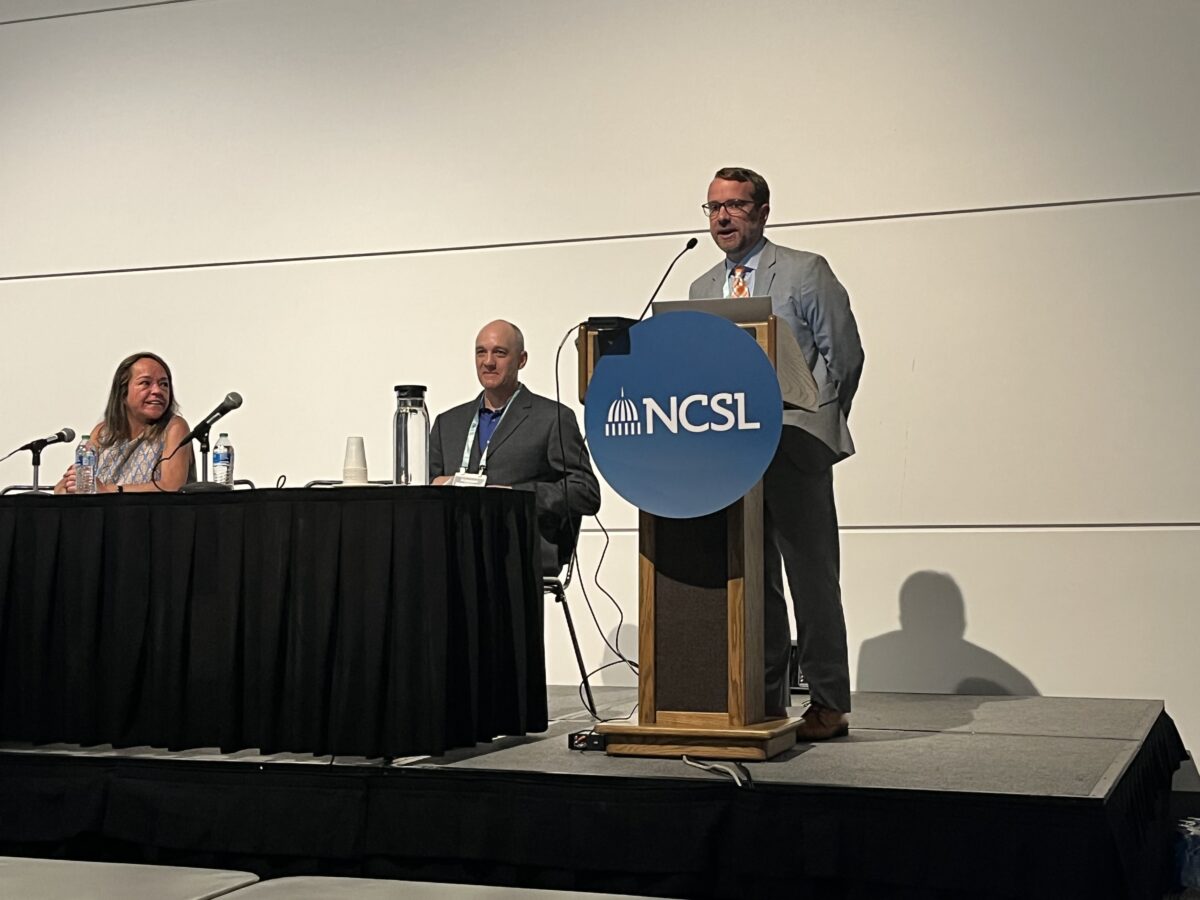 Thanks to the bipartisan Infrastructure Investment and Jobs Act, there’s more than $60 billion available for grid transportation investment.

Plus, $5 billion is earmarked for state grants to help establish high-capacity charging stations on every highway in the United States, and an additional $2 billion for community charging.

The hope, according to Alex Schroeder, executive lead at the Joint Office of Energy and Transportation, is to eliminate range anxiety and change consumer behavior when it comes to buying vehicles.

However, at a panel discussion at the 2022 Nation Conference of State Legislators (NCSL) on the “Promise and Challenges of Electric Vehicles,” State Rep. Steven Galloway (R-Mont.) pointed out potential issues.

“Lifecycle the batteries, seven to 10 years. What are we gonna do? Talking to the recyclers, it’s a big issue.”

Galloway stated that currently, 100 percent of ICE vehicles are recycled. But the same isn’t true for electric vehicles (EVs).

“Right now, most [EVs] are just piling up and nobody wants to touch them. It’s causing fires at home, you know, there are different issues that really aren’t publicized.”

Galloway also said that in Montana, there’s not enough wind or solar to provide energy for the type of integration the federal government is planning.

He said that it gets frigid in Montana, and cold significantly impacts battery life. He wanted to know what solutions if any, the federal government had for these problems.

State Sen. Faith Winter (D-Colo.), a panelist for the session, responded that in her state, legislators were starting to look at end-market use for EVs. “We’re behind frankly, but it’s one of the areas that we’re trying to catch up on and create that in the market so that [EVs] aren’t just sitting around. They aren’t the vehicles no one wants.”

Schroeder added, “There is a lot of effort, particularly in the Department of Energy (DOE) right now, … to support the evolution of that supply chain looking at the back end of that, certainly. Second use and recycling are being looked at at the federal level, but it’s going to take an evolution to deal with this issue.”

State Sen. Jeff Brandes (R-Fla.) added, “[Recycling] it’s a multi-billion dollar industry. … [Private] individuals are making investments to figure out the recycling piece, and that will be solved. I have no doubt about it.

In regards to the cold and lack of certain renewables, Schroeder said grid resiliency was an aspect the federal government was examining and that the future grid would need to be “responsive and flexible.”

He said the federal government plans to acknowledge the diversity of clean resources and utilize them. He did not specify how.

During the 2022 NCSL legislators summit, there were several themed tracks for lawmakers and their aids. Health and Human Services, Criminal Justice and Law, Elections, and Redistricting, were just a few. But arguably the most attended was Energy, Environment and Transportation.

Indeed, most sessions on energy resulted in packed rooms and people lining the walls. Considering transportation impacts most constituents, legislators’ interest in this issue is unsurprising.

Further leading to the enhanced interest is the Biden administration’s uncompromising push to increase EV adoption.

Schroeder pointed to a post on Twitter by Vice President Kamala Harris: “The future of transportation in our nation and around the world is electric.”

In response, Schroeder said the DOE and other transportation agencies were “full steam ahead with EVs. It is the future of transportation.”

Schroeder added that as of Aug. 1, all 50 states, plus D.C. and Puerto Rico, had submitted an EV integration plan to the National Electric Vehicle Infrastructure Formula program. The states’ compliance will help speed the Biden administration’s plan to install four 150kW DC fast chargers every 50 miles along the interstate, Schroeder concluded.