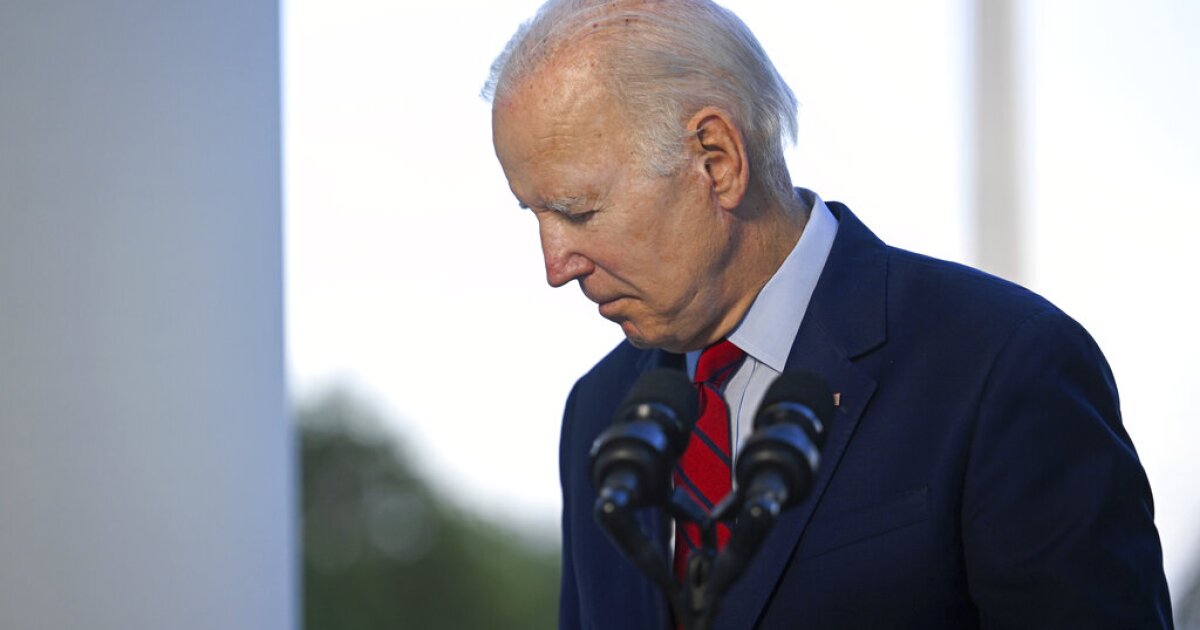 President Joe Biden was in office for three months when he addressed the nation from the White House Treaty Room last April, repeating a promise to bring troops home from Afghanistan.

“It’s time to end the forever war,” Biden said from the room where then-President George W. Bush had launched the invasion nearly 20 years earlier. Though two successive administrations had failed to end the mission, public opinion polls showed the public was supportive of Biden following through with former President Donald Trump’s plan to withdraw.

Yet the chaos that ensued months later has called into question Biden’s handling of the operation, accelerating a downward spiral in popularity from which he has never recovered and prompting a 100-page investigation by Republicans in Congress.

By mid-August, rapid Taliban gains had threatened to turn the fulfillment of a popular campaign promise into a political liability for the president, whose approval rating began to slip underwater as his administration rushed to evacuate Americans and Afghan allies from the country while major cities fell to insurgent commanders.

And while Biden had promised an orderly exit, the reality of evacuating more than 120,000 people under emergency conditions quickly grew stark. Biden later argued some fallout was inevitable.

“There was no way to get out of Afghanistan, after 20 years, easily,” Biden said during a news conference several months later. “Not possible no matter when you did it. And I make no apologies for what I did.”

The perception that the administration was shifting the goalposts further dented public confidence, said Richard Fontaine, CEO of the Center for a New American Security and an adviser to the late Arizona GOP Sen. John McCain.

“They said things like, ‘We’re going to end this responsibly. We’re going to have an enduring commitment to Afghanistan. It’s not like the Taliban are just going to walk in and take Kabul one weekend,’” Fontaine said of the Biden administration. “And next thing you know, you’ve got something that looks like the fall of Saigon on your TV screen.”

Fontaine said the chasm between what the public expected to happen and the outcome shook people’s faith.

“I don’t think it was a surprise that people who watched the disastrous withdrawal from Afghanistan had their confidence shaken in the American ability to get things done,” he added, calling the unfolding events “searing and traumatic.”

In the following months, Biden’s standing with voters took a protracted beating as domestic and international crises piled up.

Biden had lost job approval in the weeks leading up to the evacuation as inflation took hold and a new coronavirus variant spread, according to a RealClearPolitics polling aggregate. But as the order to evacuate got underway, the percentage of voters who disapproved of the job the president was doing appeared to surge sharply upward.

The president had promised a safe and orderly exit from Afghanistan by Sept. 11. Instead, weeks before the symbolic deadline on the anniversary of 9/11, Taliban fighters swept through the country and into Kabul. A Morning Consult-Politico poll conducted in the days before and after the Taliban seized control of the capital city showed that 49% of voters supported the withdrawal, a 20-percentage-point drop from April, when 69% backed it.

On Aug. 26, a suicide bombing outside Hamid Karzai International Airport killed an estimated 170 Afghan civilians and 13 U.S. service members as desperate crowds continued to surge the airport in the hopes of moving past the security perimeter and out of the country.

Republicans in Congress have accused Biden in a 100-page report of failing to prepare for the U.S. drawdown and leaving until the final moment decisions on how to evacuate Americans and Afghan allies from the country as Kabul fell to the Taliban.

The investigation, led by Rep. Michael McCaul (R-TX), the ranking member of the House Foreign Affairs Committee, claims senior Biden officials misled the public about the situation in Kabul, issuing public statements that contradicted dire internal assessments by the State Department and U.S. military, and that some officials in the country dragged their feet.

The Republican minority’s report also disputes Biden’s assessment that the United States could not maintain a troop presence there without a “return to war with the Taliban.”

But after nearly two decades, outside supporters of a drawdown said it was past time to leave.

“The reality is that we were losing the war. Even with a massive set of airstrikes and a surge of forces from 2017 to 2019, the Taliban kept gaining ground, and the Afghan government just simply did not have the support of its people,” said Dan Caldwell, a senior adviser to Concerned Veterans for America and vice president of foreign policy at Stand Together. “That’s a hard reality for a lot of people to accept.”

He added, “There was not some magical middle ground where we could have kept 2,500 troops in Afghanistan and held back the Taliban without incurring significant casualties.”

“The President refused to send another generation of Americans to fight a war that should have ended long ago — and we fundamentally disagree with those who advocated for miring the United States’ fighting men and women in an indefinite war with no exit strategy,” Watson wrote.

The White House remains confident that the public holds no interest in returning to a protracted conflict. Some outside observers agree.

“There’s no groundswell of public opinion in favor of going backward,” said Will Ruger, president of the American Institute for Economic Research and Trump nominee to be ambassador to Afghanistan. “What’s the constituency for the forever wars, especially if you were looking at, say, Russia as being a dangerous threat or China?”

“People didn’t like the fact that he was telling the truth about what the U.S. policy objectives and interests were in Afghanistan and that no, this wasn’t a humanitarian mission. This was a counterterrorism and counterinsurgency mission,” Adam Weinstein, a research fellow at the Quincy Institute and veteran of the Afghanistan War, said of Biden.

“To the average American, if you look at polling or if you talk with them, it makes absolute sense that we left Afghanistan. But those aren’t the people who write op-eds,” Weinstein added. “But that’s not who Biden did the withdrawal for. He did it first and foremost based on his own assessment of the risks and secondly because he knew the average American didn’t want to stay in Afghanistan indefinitely.”

For Biden, the promise to pull out of Afghanistan was a long time coming.

Facing off against former Wisconsin GOP Rep. Paul Ryan on a vice presidential debate stage in Kentucky in 2012, Biden had pledged the drawdown would be complete in two years. “We are leaving,” Biden said at the time.

That was when he was former President Barack Obama’s understudy. As president, Biden kept his promise in his first year — so far, the last one in which his approval rating topped 50%.