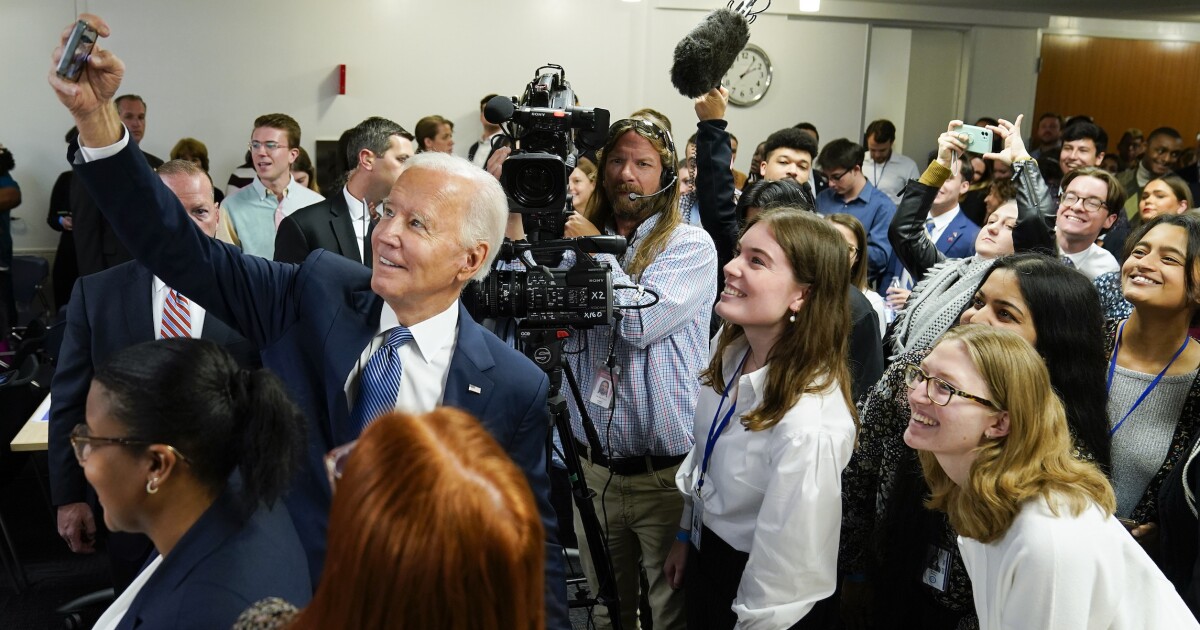 President Joe Biden said his party is the most fiscally responsible in remarks Monday to Democratic staff and volunteers ahead of the midterm elections.

Biden is mounting a last-ditch effort to mobilize Democratic voters weeks before an election in which they are expected to endure major losses. He is also preparing the party’s messaging for the possibility of Republicans controlling one or more chambers of Congress because the focus will quickly turn to 2024.

“We the Democrats are the ones that are fiscally responsible,” Biden told the Democratic National Committee crowd. “Let’s get that straight now.”

The president, who was greeted with chants of “Let’s go, Joe!,” mocked Republican claims that he is a “big spender.”

Biden pointed to record deficit reduction on his watch as pandemic benefits expired and high spending under congressional Republicans and former President Donald Trump, much though not all of it occurring as the country grappled with COVID-19.

He especially zeroed in on the price tag of the Trump tax cuts, which he contended were skewed toward the wealthy and corporations.

Biden defended his party’s record of fiscal discipline in a speech otherwise highlighting the government benefits his administration has delivered with the help of Democrats in Congress while excoriating Republicans for wanting to cut them.

Since taking office, Biden has proposed trillions of dollars in new spending. Most of it has not made it through Congress, with the Senate split 50-50. The second Democratic reconciliation bill titled the Inflation Reduction Act, passed with significantly less spending than earlier versions of Build Back Better.

Biden has made Republican calls to repeal the spending legislation a big part of his campaign theme.

Struggling to gin up enthusiasm among younger voters, Biden also talked up his student loan forgiveness plan. He downplayed inflation, which some economists argue could be made worse by student loan debt relief, along with the $1.9 trillion American Rescue Plan he already signed into law.

“We know a lot of folks are struggling with inflation driven by [Russian President Vladimir] Putin’s war in Ukraine and the global pandemic … but we have a lower inflation rate than almost any other nation,” he said.

Biden has also leaned heavily into the Supreme Court’s reversal of Roe v. Wade and threats to democracy from Trump and his “MAGA” supporters in the GOP.

He chided Republicans for lacking an agenda beyond cutting Social Security, banning abortion nationally, and rolling back his and former President Barack Obama’s policies.

Biden again blasted “Mega MAGA trickle down,” predicted government shutdowns and debt defaults under a Republican Congress, and suggested the polls would swing back in the Democrats’ favor a final time before Nov. 8.

While still attempting to salvage the Democrats’ narrow congressional majorities, some of Biden’s arguments could be seen as aimed at the future.

Both Obama and former President Bill Clinton ran against congressional Republicans’ government shutdowns and portrayed them as likely to cut entitlement programs. Clinton sought to cast Democrats as fiscally responsible, working with the new Republican majorities to deliver the first balanced federal budget since 1969. These strategies helped both men win reelection after Democrats suffered major losses in the midterm elections.