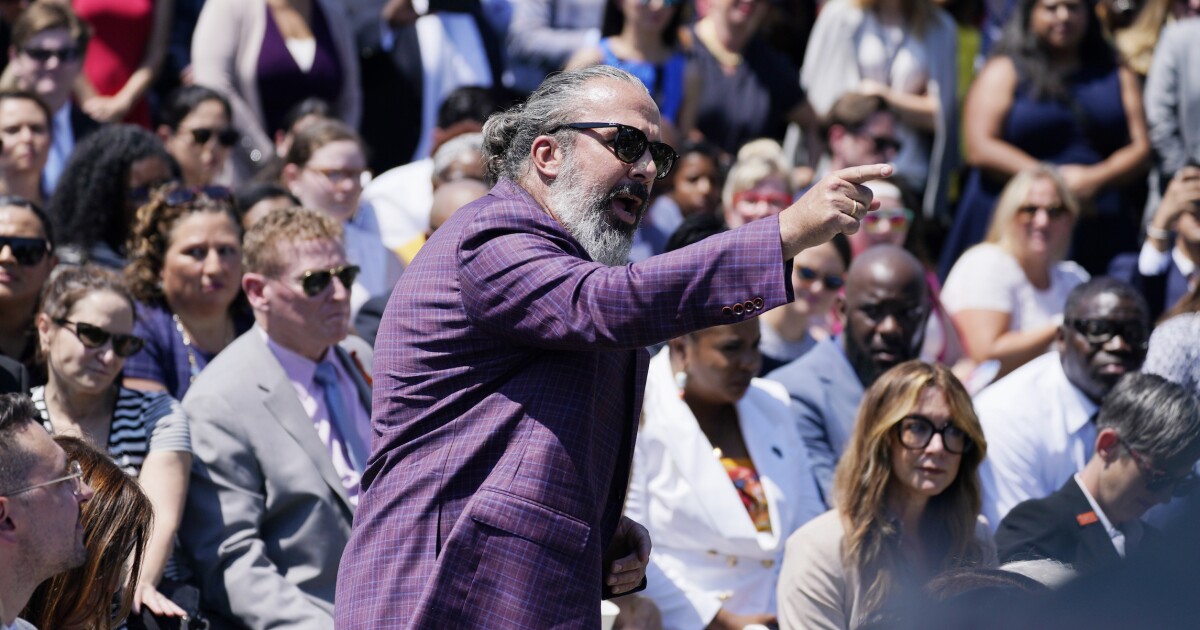 President Joe Biden stood Monday in the bright sunshine on the White House South Lawn to tout the first major federal gun control legislation in three decades — but a heckler and Biden’s own words highlighted how far removed it was from what Democrats really want.

Biden was loudly pestered by the father of a mass shooting victim who objected to the president’s claims that the bipartisan gun violence measure “matched thoughts and prayers with action.” While the man was kicked out of the event by security, Biden’s own words indicated he agreed with some of the objections.

“It will not save every life from the epidemic of gun violence, but if this law had been in place years ago, even last year, lives would’ve been saved,” the president said. “It matters. It matters. But it’s not enough and we all know that.”

During his remarks, Biden outlined how the legislation included funding for red flag laws, extending the ban on domestic violence convicts buying weapons to those in dating relationships, and outlawing straw purchases. He also iterated his determination to ban semi-automatic rifles “once again” and called for the additional passage of safe storage laws and expanded federal background checks.

Democrats finally got a gun control bill passed but got little of what they wanted.

Some polling backs up the idea that the public would support further measures, such as a Morning Consult and Politico poll that found 88% of respondents support universal background checks, 84% support preventing sales of firearms to anyone reported as dangerous to law enforcement by a mental health provider, and 79% support barring purchases by people on the federal no-fly list.

“Democrats should point to this as a win because it is,” said Democratic strategist Brad Bannon. “My guess is it’ll prevent some crazy nut from getting a weapon and killing people, and if it only saves a few people, the bill will be worthwhile. But Americans won’t be satisfied, and Democrats should press for more.”

Whether or not those further demands are realistic remains an open question. Twenty-eight years passed between the 1994 bill and the one Biden signed into law last month, and even that may not have passed without intense lobbying from actor Matthew McConaughey.

Republicans in particular may not have the appetite for further measures.

“Biden got his gun safety bill passed. He should be touting that bill and not moving on to a bill that won’t work and won’t pass,” said GOP strategist John Feehery. “1994 was a political disaster for Democrats, and Biden should have a better appreciation for the politics surrounding that law.”

Gun control has failed the Democrats before. The party suffered historic losses in the 1994 elections after the assault weapons ban passed. Republicans scored their first House majority in 40 years, with gun owners playing a part. Biden also took major heat in later years for his role in the 1994 bill due to its impact on incarceration rates, saying at one point that it was a mistake to support it.

The new bill enjoyed relatively broad bipartisan support. Passed in the wake of mass shootings in Buffalo, New York, and Uvalde, Texas, the Bipartisan Safer Communities Act passed the House of Representatives by a vote of 234-193, with 14 Republicans joining every Democrat. The measure passed the Senate in a 66-33 vote, with 15 Republican senators approving the bill.

Democrats are now hoping it will provide a boost to their cause in the midterm elections, though the odds appear stacked against them.

“Assault weapons need to be banned. They were banned,” he said while also calling for a ban on high-capacity magazines. “I’m determined to ban these weapons again.”