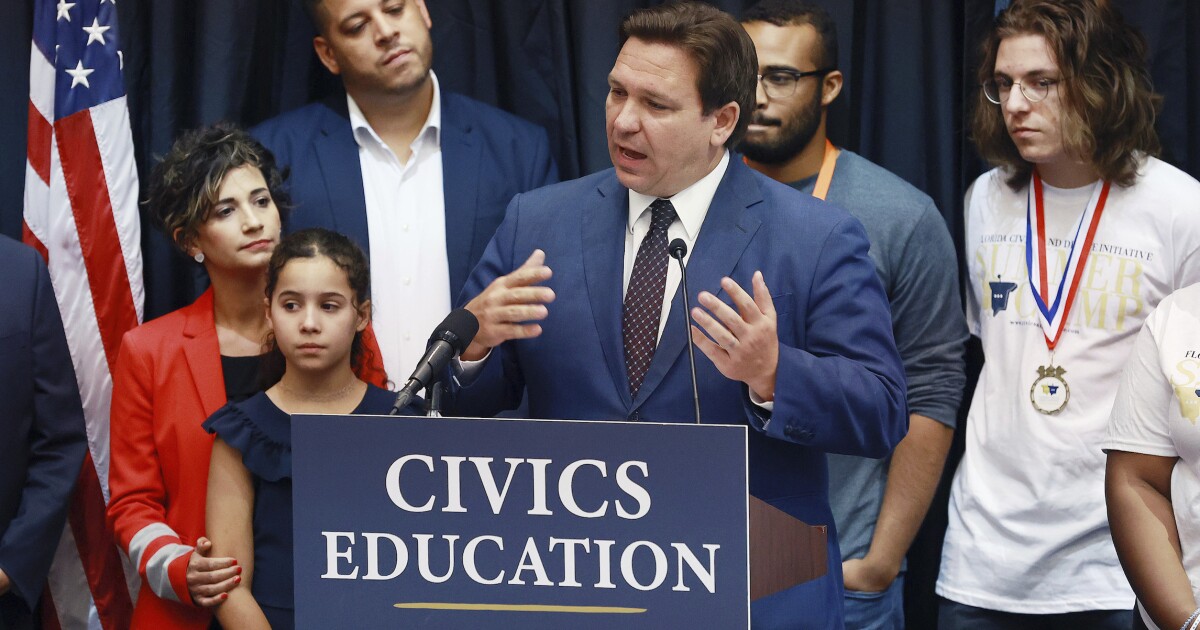 Gov. Ron DeSantis (R-FL) has lashed out at a federal bill he says will push critical race theory on students across the country — setting up another showdown with President Joe Biden in the process.

In a release touting the state’s improving test scores and focus on civics education, DeSantis also sharply criticized Biden and a bill called the Civics Secures Democracy Act, which he says will force public schools to teach critical race theory in order to receive $6 billion in federal grants.

“While the Biden administration is seeking to award grants to indoctrinate students with ideologies like critical race theory, in Florida we have focused on civics excellence, teaching accurate American history without an ideological agenda,” said DeSantis. “Our students and teachers have worked hard to elevate their civics excellence and are proving to the nation that Florida is the national model for cultivating great citizens.”

DeSantis, widely seen as a 2024 presidential contender, has been trading barbs with Biden for months, with the latter often the instigator in their exchanges. Biden heavily criticized DeSantis during the signing ceremony for an LGBT-focused executive order, accusing him of “going after Mickey Mouse,” and also issued a veiled criticism while touting the COVID-19 vaccines newly available to young children.

In this case, DeSantis appears to be drawing first blood by attacking the civics bill, which was introduced in mid-June by a bipartisan group of senators. The bill aims to expand educational programming in history and civics, with funding available for state education agencies, nonprofit groups, and institutions of higher education and research, according to a release.

Its sponsors include Sens. Jim Inhofe (R-OK), John Cornyn (R-TX), and Bill Cassidy (R-LA), who said, “America’s history unites us as Americans. Civics education tells that story. As we seek to overcome our divides, telling this story is essential.” The release also included a supportive statement from Bipartisan Policy Center President Jason Grumet.

But a limited number of GOP critics have come out saying the bill will effectively force schools to teach critical race theory, an academic framework that claims that the culture and institutions of the United States are systemically racist and oppressive to racial minorities, in order to lure billions worth of federal funding. Along with DeSantis, those critics include former House Speaker Newt Gingrich and, notably, former President Donald Trump.

The White House did not respond to a request for comment from the Washington Examiner, while the Department of Education pointed to a 2021 blog post from Secretary of Education Miguel Cardona. The post mentions an American history and civics grant program but adds that it “has not, does not, and will not dictate or recommend specific curriculum be introduced or taught in classrooms. Those decisions are — and will continue to be — made at the local level.”

The issue didn’t come up during Tuesday’s White House press briefing, the first since DeSantis’s comments about the bill.

Education has been a big political focus of late, particularly in conservative circles where it has been credited with helping Glenn Youngkin win the Virginia governor’s race. Conservatives such as Free to Learn Coalition President Alleigh Marre are focused and wary of what’s being taught in America’s classrooms.

“At a time when the federal education establishment is defying the best interest of a generation by de-emphasizing academics and pushing partisan and activist-driven ideologies, it is promising to instead see investments made toward improving student performance, expanding academic extracurricular programs, and educator training,” she said. “Parents are rightfully concerned with the increasingly political climate in schools and any focus on academic core competencies is welcome.”

One of Biden’s most recent spats with DeSantis also centered on education, with the president lampooning Florida’s Parental Rights and Education bill and inviting an activist who organized protests against it to the White House. The White House issued a statement on Friday criticizing the bill as a “shameful” example of “disturbing and dangerous nationwide trend of right-wing politicians cynically targeting LGBTQI+ students.”

DeSantis, as he’s done elsewhere, touts his state as a model to follow. His release says Florida’s 2022 civics assessments demonstrate the success of the state’s approach to educating students about the U.S. and the role they play as citizens and notes that the achievement gap between white and African American students narrowed on all social studies assessments.