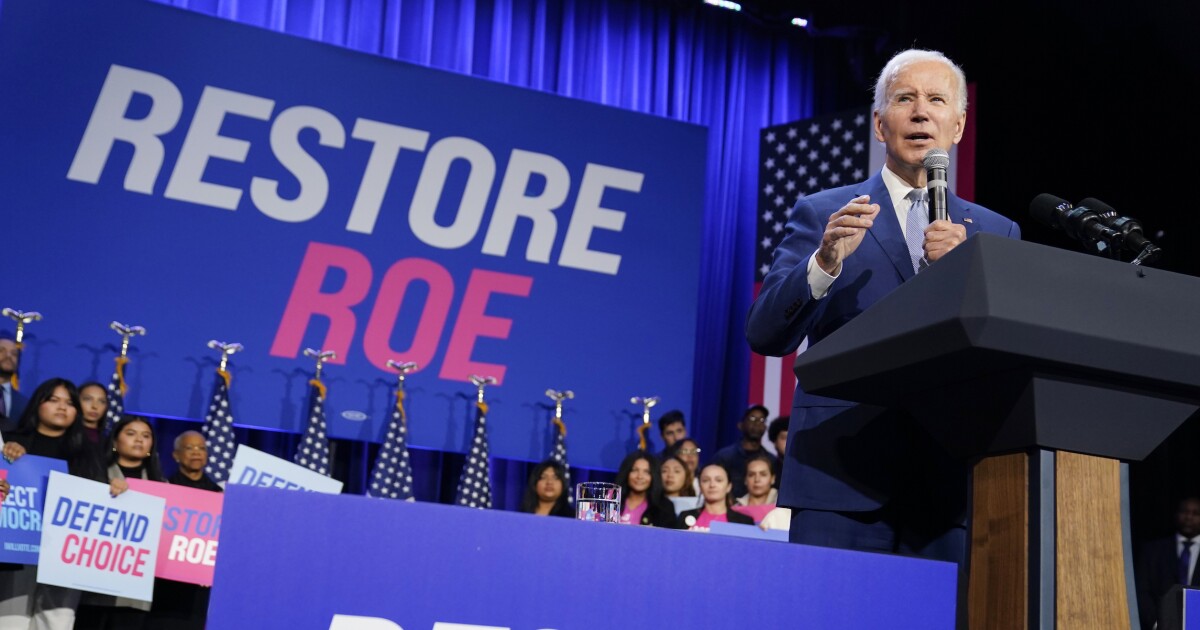 President Joe Biden offered some insight Thursday into his stance on abortion as Democrats focus on the issue ahead of the midterm elections, saying his view is contained in the text of the 1973 Roe v. Wade decision.

Many Democrats have been vague about what, if any, limits to abortion they support even while campaigning around their pro-abortion rights views, so Biden’s statements will be closely scrutinized as a clue to the party leadership’s thoughts.

IS THE WHITE HOUSE OVERUSING A FEDERAL LAW TO AVOID ANSWERING QUESTIONS?

“Yes. There should be,” Biden said when asked if there should be restrictions on abortion. “It’s Roe v. Wade. Read it, man. You’ll get educated.”

Biden made the remarks on the White House South Lawn before boarding Marine One, momentarily grabbing the reporter’s microphone as he spoke. He then walked off without elaborating, leaving some ambiguity about what exactly he meant.

The text of the Roe ruling included the so-called trimester framework, whereby abortion restrictions were not allowed in the first trimester but could be implemented by states in the second and third.

“If the State is interested in protecting fetal life after viability, it may go so far as to proscribe abortion during that period, except when it is necessary to preserve the life or health of the mother,” reads the majority opinion.

This raises the question of when viability, or the point at which a fetus can survive outside of the womb, is reached.

In 1973, it was generally understood to be 28 weeks, though there is no consensus. Technological advances have brought this number down, and some hospital systems now say they can sustain life as early as 22 weeks. This standard would be just seven weeks longer than the 15-week ban proposed by Sen. Lindsey Graham (R-SC) and decried by most Democrats.

Two bills have been introduced in Congress, with supporters of each saying they would codify Roe. The first, the Women’s Health Protection Act, passed the House but was defeated 46-48 in the Senate. But its opponents say it would go far beyond Roe, eliminating the ability of states to establish any limits on abortion.

“It would set up what Roe allows, which is abortion on demand through all nine months, and it also prohibits states from having pro-life policies like informed consent, keeping tax dollars from paying for abortions, or conscience protections for health providers who don’t want to participate,” said Melanie Israel, a policy analyst at the conservative Heritage Foundation. “It would effectively repeal over 500 different state laws which had been held as constitutional under Roe.”

With Congress stalled, both parties have made their case to midterm voters about abortion policies.

Biden spoke at a Democratic National Committee event Oct. 18 before a backdrop reading “Restore Roe” in block letters, during which he promised to sign an abortion bill on the first day of the next Congress if Democrats stay in power.

“Republican Party leaders have made it clear: They want to ban abortion nationwide,” Harris said in September. “And they won’t stop there.”

But when pressed, most Democrats haven’t made clear if they would support any limits on abortion, leading Republicans to paint them as extremists who would support it for every month of a pregnancy.

The issue came up again during a debate when Rubio, who co-sponsored Graham’s 15-week ban, said of Demings, “She still won’t answer what specific limits. She has never voted for limits.”

Demings said she endorsed “a woman’s right to choose up to the time of viability” but did not name a specific time frame.

Ultimately, voters will now decide for the first time in 50 years what limits they support. A survey from Republican polling firm WPA Intelligence found that voters believe the Democratic Party’s position is “more extreme” than the Republican position by nearly 2-to-1.

But Democrats think the issue will help drive turnout among their voters, and some party leaders even mark the Dobbs v. Jackson Women’s Health Organization decision as the beginning of a rebound in Biden’s presidency. Polling from the Kaiser Family Foundation found that abortion access is motivating majorities of Democratic women, women of reproductive age, and Democratic-leaning voters in states that have restricted the practice.