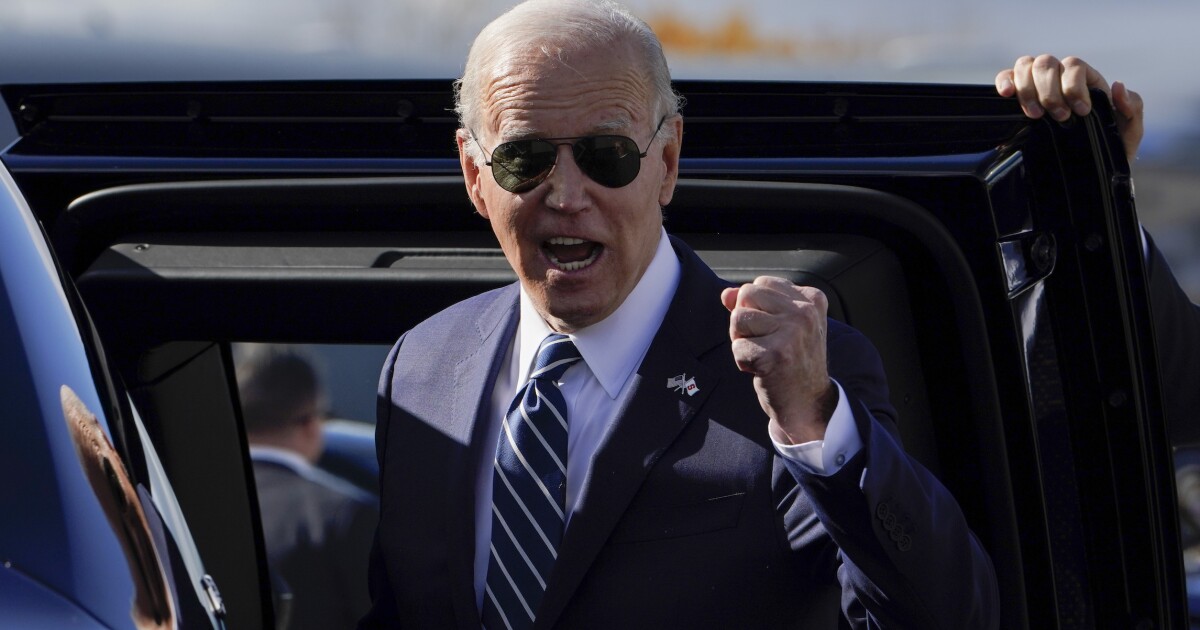 President Joe Biden is sharpening his economic message in the final two weeks of midterm campaigning, aggressively targeting Republicans as threats to economic security at both the individual and societal levels.

Biden made a stop in Syracuse, New York, on Thursday to promote manufacturing but spent much of his speech focused on economic plans he said Republicans would execute if they win control of Congress.

“The previous president made a string of broken promises in places like Wisconsin, Indiana, and Ohio, where promised investment in jobs and manufacturing never materialized. But layoffs and shuttered factories did materialize,” Biden said. “Today’s announcement is the latest example of my economic plan at work.”

Biden hit the industrial city because of Micron Technology’s plan to invest billions of dollars in microchip manufacturing. The president talked up the CHIPS and Science Act, passed by Congress this year to boost the production of computer chips, along with the number of jobs created since he took office.

But he also sought to contrast that progress with warnings about what a GOP-held legislature might do, saying Republicans would put Medicare and Social Security on the chopping block, raise prescription drug prices, and implement trickle-down economics.

Republicans have focused their midterm messaging on inflation and the economy, along with crime and illegal immigration. Rep. Kevin McCarthy (R-CA), who will become House speaker if the GOP takes over, has accused Democrats of running the economy “into the ground,” contrasting that with Republicans who offer “a new direction that gets our country back on track.”

Democrats, in contrast, spent much of the summer and early fall focused on abortion, student loans, climate change, and the threat posed by Trump-aligned “MAGA” Republicans.

“You’ve heard the president talk about student loans, economic recovery, you’ve heard him talk about abortion rights, all of the things that he believes matter, issues that impact the American people,” she said. “At the same time, he wants to also lay out what congressional Republicans are saying they’re going to do. That matters.”

Driving the point home, Jean-Pierre said the plan of congressional Republicans is to make the economy worse, not better.

The Republican National Committee reacted to Biden’s speech by pointing out not only its themes but its location.

“We’re less than two weeks out and Biden is parachuting into New York to save Democrats, like Rep. Sean Patrick Maloney (D-NY) and Gov. Kathy Hochul (D-NY), who brought skyrocketing prices and out-of-control crime to New York,” said RNC Chairwoman Ronna McDaniel. “Newsflash — it will backfire. Families cannot afford Biden and Democrats’ failed economy, and voters everywhere are eager to vote Biden Democrats out of office.”

Questions about Biden’s campaign schedule continue to dog the White House as he continues making policy-focused stops rather than overt political rallies and is sticking mostly to blue states like California, Oregon, and New York, rather than true battleground states like Georgia, Nevada, and Arizona.

Biden has visited Georgia and Nevada just once in 2022 and hasn’t been to Arizona at all despite all three states hosting competitive senate races. But he’s visited Ohio four times, Virginia six, Maryland eight, and Pennsylvania nine times. Of those, only the Quaker State is considered a battleground.

The Syracuse visit was Biden’s seventh to traditionally blue New York, where Hochul is trying to hold off a challenge from Republican Lee Zeldin.

It may be too late for Biden and Democrats to change voter perceptions with the midterm elections less than two weeks away. An ABC News-Ipsos poll released last week shows that respondents prefer Republicans over Democrats 36% to 21% to deal with inflation.

Biden’s overall job approval is at 43.1%, per the RealClearPolitics average, which is fairly low, but his approval on the economy is even lower, just 38.9%, against 58% who disapprove.