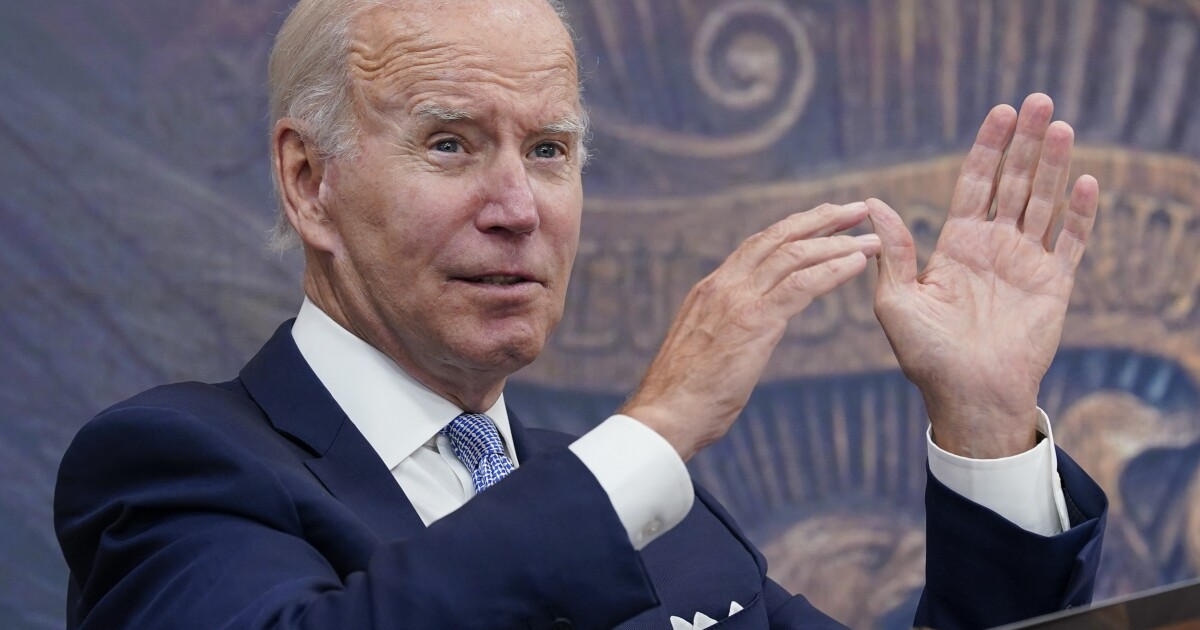 President Joe Biden is on the edge of securing two major legislative wins, but whether they will deliver on their stated aims of controlling inflation or even reassuring voters ahead of the midterm elections is much less clear.

The annual consumer price index rose to 9.1% in June, and on Friday, the Department of Commerce announced that the personal consumption expenditures price index, the inflation gauge closely monitored by the Federal Reserve, hit 6.8%. Both data points mark the highest levels recorded in four decades and prompted the Fed to raise interest rates yet again by 75 basis points Thursday.

The partisan debate over the bills currently being championed by the president is hardly unexpected, yet campaign strategists from both sides of the aisle say that, in voters’ minds, the one person in particular who endorsed the legislation matters much more than the actual fiscal impact heading into November

“Throughout Biden’s entire time in the White House, Manchin has been the lone Democrat to push back on his socialist spending ambitions,” one Republican strategist told Washington Examiner. “He’s been demonized and attacked by his own party for a year straight, but he’s held the line.”

“Voters aren’t going to sit down and crunch the numbers on this. They’ll look at [Manchin] alone and say, ‘OK, maybe this thing is getting back on track,'” that person added. “I don’t think any hemming and hawing from Republicans will be able to cancel out the simple impact his blessing grants.”

A recent poll conducted by the Chamber of Commerce found that a strong majority of the 1,219 respondents are focused “like a laser beam” on inflation. Sixty-four percent said they are concerned with the direction the economy is headed, and 58% said they wanted Congress to focus on legislation lowering prices for consumers over all other issues, with every other issue receiving 7% support or less.

Biden and allies maintain that the long-negotiated reconciliation bill brokered by Manchin and Senate Majority Leader Chuck Schumer (D-NY) will raise revenues by ensuring that the wealthiest people and companies pay a “fair share” in taxes, lower healthcare costs for families, and develop “cost savings and job-creating clean energy solutions for the future.”

“This bill would be the most significant legislation in history to tackle the climate crisis and improve our energy security,” he said in remarks touting the reconciliation bill Thursday. “This bill is far from perfect. It’s a compromise. But that’s often how progress is made: by compromises.”

Questions remain about Biden’s economic foresight, especially following his 2021 prediction that inflation would be “transitory” and decrease by early 2022. Though a number of economists have signed off on various aspects of this new bill, specifically the deficit-balancing new tax provisions, some also doubt the true scope of the bill’s impact.

Maya MacGuineas, the president of the Center for a Responsible Federal Budget in Washington, told the New York Times that fighting inflation requires “policies that will increase supply or reduce demand.”

“Almost every one of these policies, in and of itself, will fight inflation,” she added. “On net, the entire package most certainly will.”

Jason Furman, a professor of economics at Harvard University and the chairman of former President Barack Obama’s Council of Economic Advisers, offered a slightly sober assessment.

“This legislation will lower inflation,” Furman, who has quietly criticized Biden’s economic policy in the past, said in a statement. “I don’t think it will lower it by a lot.”

Worse, the University of Pennsylvania’s Penn Wharton Budget Model predicted that the bill will actually increase inflation by 0.05% in 2024 before decreasing by 0.75% per year moving forward. The Biden administration was not directly involved in the Manchin-Schumer negotiations and has not yet modeled the plan’s inflationary effect, White House officials say.

On the other hand, White House officials expect the latest CHIPS iteration to provide more long-term fiscal security rather than delivering any short-term price reductions.

The semiconductor competition bill has now passed both chambers of Congress with bipartisan support and will soon be sent to Biden’s desk to be signed into law. It will invest more than $50 billion in expanding domestic semiconductor manufacturing, which White House officials say will insulate consumers from future market shocks.

“When we have semiconductor investment, we’re able to increase the supply of goods like cars, which will help bring the cost of those goods down,” one official explained. “This will not only increase our competitive edge with China, but it’ll bring real manufacturing investment to the United States, which will bring jobs along with it.”

Twenty-four lower chamber Republicans voted for the semiconductor bill despite House GOP leadership whipping against it due to national security concerns regarding China.

Republicans are focusing their attacks on the tax increases included in the Manchin-Schumer bill, claiming they will disproportionately affect middle-class families despite Biden’s pledge not to raise taxes on homes earning less than $400,000 per year.