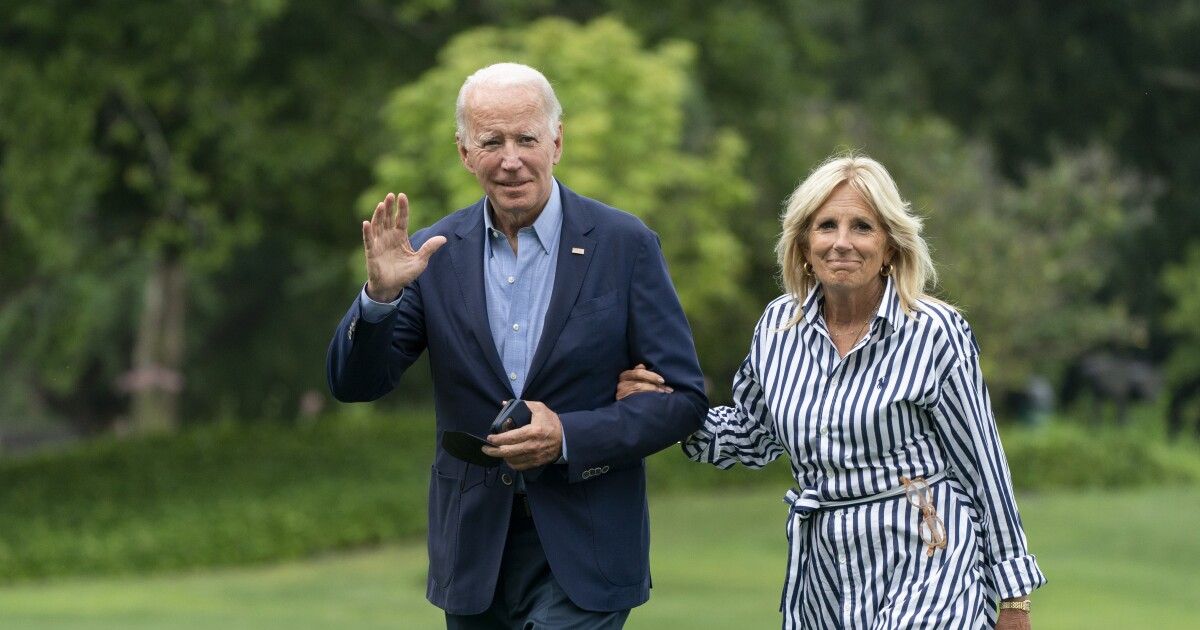 President Joe Biden’s allies are hopeful that next month’s consumer price index report, historically bad news for the White House, could instead cap a historic run.

July’s headline inflation numbers, slated to be published at 8:30 a.m. ET on Wednesday by the Bureau of Labor Statistics, are expected to fall significantly compared to the 9.1% posted in June.

The Federal Reserve Bank of New York’s monthly consumer sentiment survey found on Monday that one-year inflation expectations fell by more than half a percentage point in July. Three-year and five-year expectations also fell from 3.6% to 3.2% and 2.8% to 2.3%, respectively.

BIDEN IS SELLING A COMEBACK STORY, BUT IS AMERICA BUYING?

The White House attributes those drops in large part to the steady decreases in energy and food prices seen over the past two months. Just last week, the Biden White House touted the 50th consecutive day in which average national gas prices decreased.

“We obviously have not seen the data, but looking at forecasts, we expect the decrease in the cost of gas over the past month-and-a-half, two months to be included in this month’s CPI, while the June CPI included most of the increase in the cost of gas,” one senior White House official told the Washington Examiner. “We hope to see that reflected in real numbers, but we’ll also just have to see.”

“Something that we talk about every month with inflation data is it reflects what’s going on in the world at that time. The economy doesn’t operate independently. The economy is very connected to geopolitical issues that are going on, whether it’s COVID lockdowns or supply chain or Russia’s invasion and its impact on the global energy supply or major commodities like corn and wheat as world’s breadbasket,” the official said. “That’s something that we’ve continued to point to because it does have a massive effect on inflation here at home and around the world.”

A senior Democratic official added that a CPI decrease on Wednesday would be Biden’s “cherry on top” of a stretch that saw him secure three major legislative wins, the death of a major al Qaeda leader, and more.

“The president’s policies work, and we’ll have the data to prove it,” the official said. “Meanwhile, Republicans are rallying opposition behind a bill that nearly 70% of the country supports, on false grounds that it raises taxes on middle-income families. They’re running scared.”

The national average gas price dipped back below $4 per gallon on Monday for the first time since the war in Ukraine began, according to Gas Buddy. The administration has consistently pointed to an analysis from the Treasury Department showing that Biden’s releases from the Strategic Petroleum Reserve specifically drove costs down by a “sizable” 40 cents per gallon.

A White House official said Monday that the administration would “continue the work we’re doing to not only keep that price as low as we can but also to lower the costs of any other day-to-day goods, whether it’s dishwashers and computers, and cars, like we’re seeing now with the passage of the Chips and Science Act, and the inflation reduction is going to impact healthcare and drug prices, as well as energy loss.”

Year-over-year price decreases in July’s CPI would represent a major step in validating the administration’s claim that the United States is not on the precipice of a recession despite posting negative economic growth over the two quarters of the year.

Biden himself and a number of top administration officials, including White House press secretary Karine Jean-Pierre, National Economic Council Director Brian Deese, and Treasury Secretary Janet Yellen, have all pointed to the strength of the U.S. labor market as evidence of a strong economy despite the recent GDP reports.

On Friday, the Labor Department announced that the economy shattered expectations by adding 528,000 new jobs in July.

“Today, the unemployment rate matches the lowest it’s been in more than 50 years: 3.5%. More people are working than at any point in American history,” Biden wrote in a statement at the time. “That’s millions of families with the dignity and peace of mind that a paycheck provides. And, it’s the result of my economic plan to build the economy from the bottom up and middle out.”

However, any nominal CPI decrease would continue to leave the Biden administration’s handling of the economy open to criticism. His opponents point to Biden’s historically large spending bills, specifically the timing of the American Rescue Plan, as a core impetus behind the current inflationary run, and the public has generally responded unfavorably to the president’s economic stewardship after he and top officials predicted inflation would be “transitory” back in 2021.

While the president’s allies are cautiously optimistic about Wednesday’s numbers, three senior Republican aides told the Washington Examiner that Democrats are taking a “false victory lap” to “hoodwink” voters ahead of the November midterm elections.

“Gas prices may be falling, but they’re still well above the levels when Biden came into office. Meanwhile, historic numbers of Americans are leaving the workforce, and the president is jamming the largest-ever expansion of the IRS down the country’s throat and trying to sell it as a win to his socialist base,” one GOP official said. “We know what Joe Biden’s America looks like, and apparently, it’s auditing the middle class out of existence.”