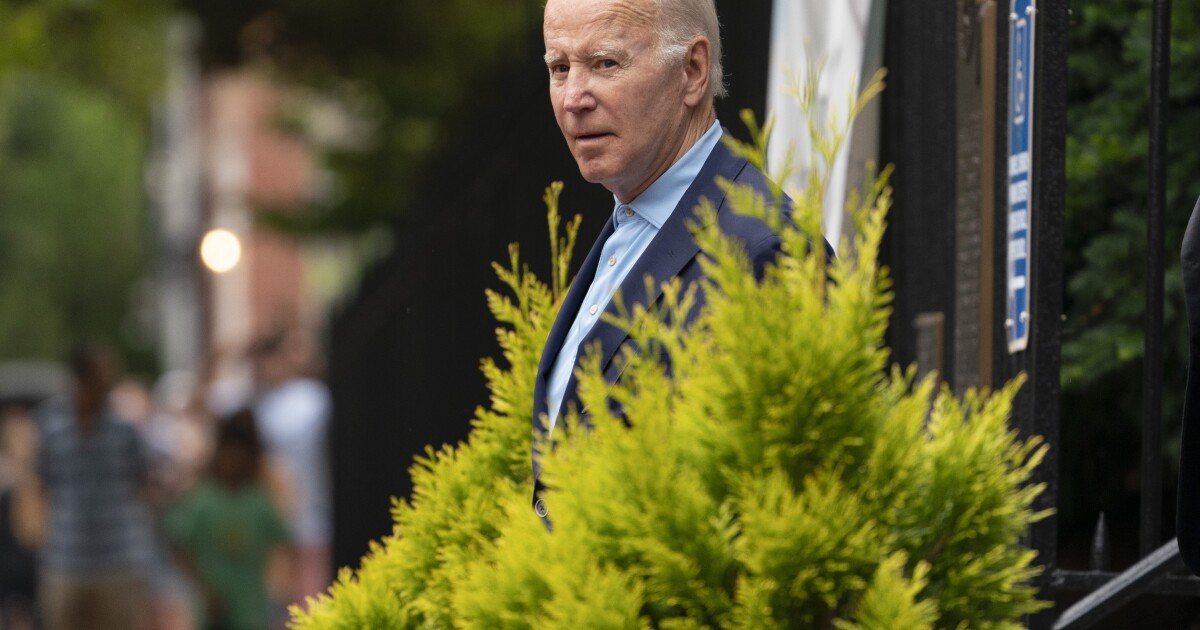 President Joe Biden is searching for a legislative win as economic concerns threaten to hand congressional majorities to the Republicans.

The economy and inflation remain the top issues for voters of both parties heading into the midterm elections. Though the White House has been quick to point out that national gas prices have fallen every day since late June, inflation rose to 9.1% in the June 2022 consumer price index, marking the largest yearly price increase in 40 years. Meanwhile, Biden’s approval ratings have slipped to first-term lows among Democrats, Republicans, and independents.

DIP IN GAS PRICES MIGHT BE TOO LITTLE, TOO LATE FOR BIDEN AND DEMOCRATS

White House officials are adamant that the consumer price index will register significantly lower in July, but the administration is still whipping support for a semiconductor competition bill as a means of clearing supply chain roadblocks that have hindered the post-pandemic recovery.

Congress has considered several different iterations of a semiconductor bill. The Senate passed roughly $250 billion in funding for domestic chipmaking in summer 2021, but the House never considered that bill. Instead, House Speaker Nancy Pelosi (D-CA) chose to focus on her own competition bill, which Republicans accused of not focusing enough on national security or countering China and for containing hidden green energy proposals.

On Tuesday, however, the Senate passed a scaled-down semiconductor bill, which included $52 billion in funding and tax breaks to help rebuild domestic chip manufacturing capacity.

One White House official told the Washington Examiner in an interview that they don’t believe the bill will address short-term inflation but can provide opportunities to avoid supply problems in the future.

“The reason that prices of cars have increased is because of supply challenges, and a lot of that has to do with semiconductor chips,” the official explained. “We know from companies across the country that they have at times had to stall production, leaving cars unfinished in factories.”

“There’s a massive economic argument for this, which is why you have companies like Intel and you have governors like Republican Gov. [Mike] DeWine in Ohio and many bipartisan members of Congress fighting for this bill because they know that this will not only increase our competitive edge with China, but it’ll bring real manufacturing investment to the United States, which will bring jobs along with that,” the official continued. “It has bipartisan support, and we think that there’s no reason to delay.”

The official pointed out the defense implications of the bill surrounding the chips used in Javelin missile systems the United States is supplying to Ukraine.

“There is such intense bipartisan support for the bill, but what we would say is, we cannot afford to play politics with our national security,” the official said. “We need to pass this bill as robust a version as possible, as soon as possible.”

The White House has also thrown its support behind two other unrelated bills in hopes of rerallying Democratic and independent voter turnout ahead of November.

One bill comes as a direct response to the Supreme Court’s Dobbs v. Jackson Women’s Health Organization ruling and would codify same-sex marriage. The measure passed the House Tuesday night, though Democrats still need to earn votes from 10 Republicans to advance the bill through the Senate.

“The Supreme Court made it clear after they overturned Roe: the basic right to privacy — right up to marrying who you love — is at risk,” Biden tweeted Wednesday in response to the House passage. “Last night, 47 Republicans and all House Democrats took an important step to codify every American’s right to marry into law.”

The Supreme Court made it clear after they overturned Roe: the basic right to privacy – right up to marrying who you love – is at risk.

Last night, 47 Republicans and all House Democrats took an important step to codify every American’s right to marry into law.

The White House is still cautiously holding out hope for a reconciliation bill that would include tax reforms, prescription drug pricing protections, and climate proposals.

However, Sen. Joe Manchin (D-WV) continues to throw a wrench in Democrats’ plans. After refusing to vote for Biden’s Build Back Better proposal in 2021, he quietly continued negotiations with the White House through the spring.

Despite his most recent opposition to the tax reforms proposed by the White House, Manchin has stated he would be open to addressing drug prices and climate funding in September.

One senior Democratic official told the Washington Examiner that getting Manchin on board with any bill would be nothing short of a “miracle.”

“At this point, Joe Manchin might be public enemy No. 1 for Democratic voters, even over Mitch McConnell or Donald Trump,” the official said. “If President Biden manages to squeeze any juice out of that rock, we’ll be able to go back to voters and say, ‘Against all odds, this administration is making good on its promises.’ I’m just not sure that’s actually going to happen.”