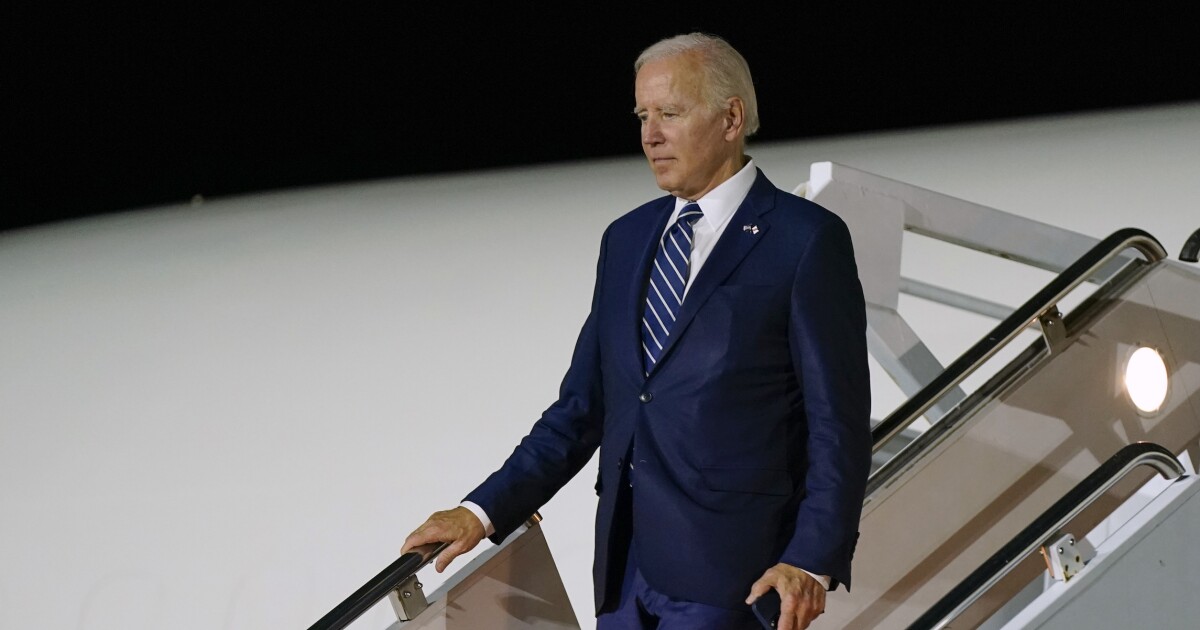 President Joe Biden has a new focus on the economy and alleged Republican plans to destroy it, but his attack lines are an old part of the Democratic playbook.

Biden is saying that if Republicans win control of Congress, as polls suggest is increasingly likely, they will try to cut Social Security and Medicare. If he doesn’t go along with their plans, GOP lawmakers will tank the economy by blocking an extension of the debt ceiling.

“They’re coming after your Social Security and Medicare,” Biden said at a virtual fundraiser for Rep. Matt Cartwright (D-PA). “They’re saying Republicans have made it clear — and they’ve said it publicly — that if they win control of the Congress, they’re going to shut down the government and refuse to pay America’s bills for the first time in history unless I cut Social Security and Medicare.”

WHITE HOUSE AGAIN ASKED: IS THE PANDEMIC OVER OR NOT?

“They’re so determined to cut Social Security and Medicare, they’re willing to take down the American economy over it because that’d be the one thing to put us in a deep recession,” he continued.

Republican majorities deliberately damaging the economy to improve their odds in the next presidential election is a popular talking point on the Left.

“This is blindingly obvious but worth stating over and over,” tweeted MSNBC host Chris Hayes. “A GOP [H]ouse majority would have every incentive to do whatever possible to make the US economy worse in the run-up to 2024.”

It’s now become the White House’s official line. “They’ve also said that if they don’t get Medicare and Social Security on the chopping block that they will hold our debt hostage, which would spiral the economy into a downward turn,” Biden’s press secretary, Karine Jean-Pierre, told reporters Thursday. “That is the plan of the congressional Republicans. It’s to make the economy worse, not better.”

The White House briefed reporters on Wednesday on the differences between Biden’s economic vision and the Republicans’, saying extending former President Donald Trump’s tax cuts would increase the deficit and repealing the Inflation Reduction Act would raise costs. One official spoke of the “Republican plan to repeal this relief for families.”

On the White House website, you can read about “congressional Republicans’ five-part plan to increase inflation and costs for American families.”

Biden has started referring to his policies as “breathing room” for people enduring higher prices.

Still, the focus on entitlement programs is a familiar one for Democrats.

Democrats toppled the first Republican Senate majority since the 1950s by running against a freeze in Social Security cost-of-living adjustments.

Under former President Bill Clinton in 1995, Democrats got back into the game against new GOP congressional majorities by railing against their budget reducing the rate of growth in Medicare spending. Spending fights led to government shutdowns. Clinton successfully ran for reelection the following year promising to protect Social Security, Medicare, and Medicaid from Republicans on Capitol Hill.

Democrats rebuffed a Social Security reform plan by freshly reelected President George W. Bush in 2005, which came during a 10-seat GOP Senate majority. Bush said he had earned political capital and intended to spend it. The proposal wasn’t the most important reason Republicans lost control of Congress the following year, but it was a Democratic talking point nevertheless.

It may be too late for Biden to be successful in the midterm elections, with tiny Democratic congressional majorities on the line. But he can hope they work better against Republican-run chambers of Congress in what will almost immediately shift to the 2024 presidential race days after the dust settles.

Biden’s talk of “mega-MAGA trickle-down economics” sounds as geared toward the next election as this one.

“Let’s be clear: This election isn’t a referendum,” Biden said at the Cartwright fundraiser, a version of a line he is now using often on the stump. “It’s a choice — a choice between two vastly different visions of America.”

Even if that doesn’t work this November, we are likely to hear it again over the next two years.