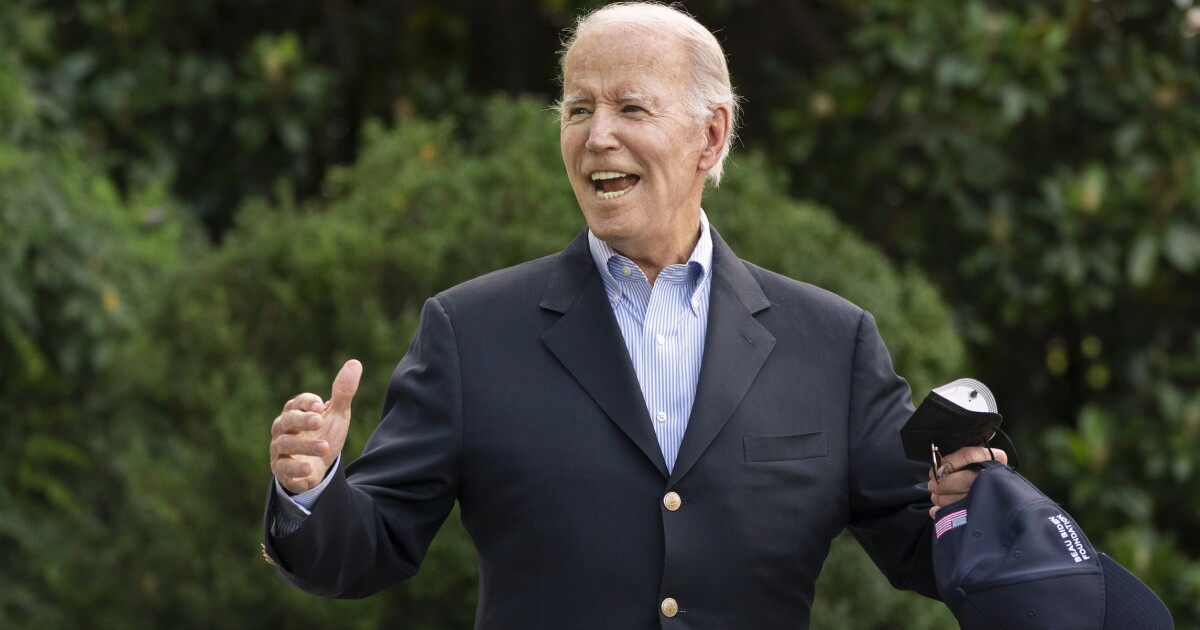 Republicans are gearing up to attack President Joe Biden as both a tax hiker and a promise breaker as the 2022 midterm elections approach.

Biden has long promised not to raise taxes on middle-class Americans, a pledge they say he’s broken with the pending passage of the Inflation Reduction Act.

WHITE HOUSE TOUTS FALLING AS PRICES, BUT IS IT TOO EARLY TO CELEBRATE?

“We can [lower prescription drug prices] without raising taxes a penny on anyone making under $400,000,” Biden said on April 21, though he’s used a version of the line dozens of times. “No one making under $400,000 would see a penny in their taxes go up. That’s the best way Congress can address inflation right now: [to] lower the cost of other things for people — everyday people working like hell just to keep food on the table.”

Though the legislation does include efforts to lower prescription drug prices and does not include higher taxes on anyone earning less than that figure, Republicans argue the bill will nonetheless effectively raise the tax burden on middle-class voters. They say the new 15% minimum tax on corporations will result in higher prices, lower wages, and suppressed retirement accounts, while a beefed-up IRS funded by the bill will result in more painful tax audits for regular folks.

“Americans are already experiencing the consequences of Democrats’ reckless economic policies,” said Sen. Mike Crapo (R-ID), ranking member of the Senate Finance Committee. “The mislabeled ‘Inflation Reduction Act’ will do nothing to bring the economy out of stagnation and recession, but it will raise billions of dollars in taxes on Americans making less than $400,000.”

Conservatives are roundly attacking Biden for the claim and the estimated 87,000 new IRS employees that are expected to bring in $200 billion in additional tax revenue by 2031.

Republican National Committee spokesman Tommy Pigott fired off a response that included a meme saying Biden would “send an army of auditors after grandma and lemonade stands.”

Josh Holmes, former chief of staff for Senate Minority Leader Mitch McConnell (R-KY), tweeted that “lots of people are going to be surprised that the American people weren’t asking for an audit, tax increase, new mail trucks, or to buy their rich neighbor an electric car.”

Progressives counter that such claims amount to misdirection, misinformation, and Reaganomics.

“The bill will not raise taxes on the overwhelming majority of Americans — including middle-class families,” said Center for American Progress economist David Madland. “It will raise taxes on billion-dollar corporations paying less than 15% in taxes and on tax cheats. Claims that raising taxes on large, profitable companies will ultimately harm workers is a continuation of the failed logic of trickle-down economics. Helping the rich get richer is a failed economic strategy.”

The new IRS funding will ensure the agency can audit wealthy people who are currently “able to get away with cheating on their taxes,” Madland argues.

White House press secretary Karine Jean-Pierre was asked about the issue on Monday and didn’t hold back in her response.

“This is just the latest example, again, of those who do nothing to protect tax welfare for the rich at the expense of everything else,” Jean-Pierre told reporters aboard Air Force One en route to Kentucky. “They’re blatant lies.”

She accused Republicans who oppose the bill of defending corporations earning more than $1 billion a year using loopholes to pay $0 in taxes. Nonetheless, the issue is sure to feature in attack ads this campaign season.

The bill is expected to bring in more revenue, according to the Committee for a Responsible Federal Budget, a nonpartisan think tank.

CRFB estimates it will reduce deficits by $305 billion through 2031. The White House also touts how the bill is designed to reduce prescription drug costs and utility bills, which would offset any increases in tax revenue.