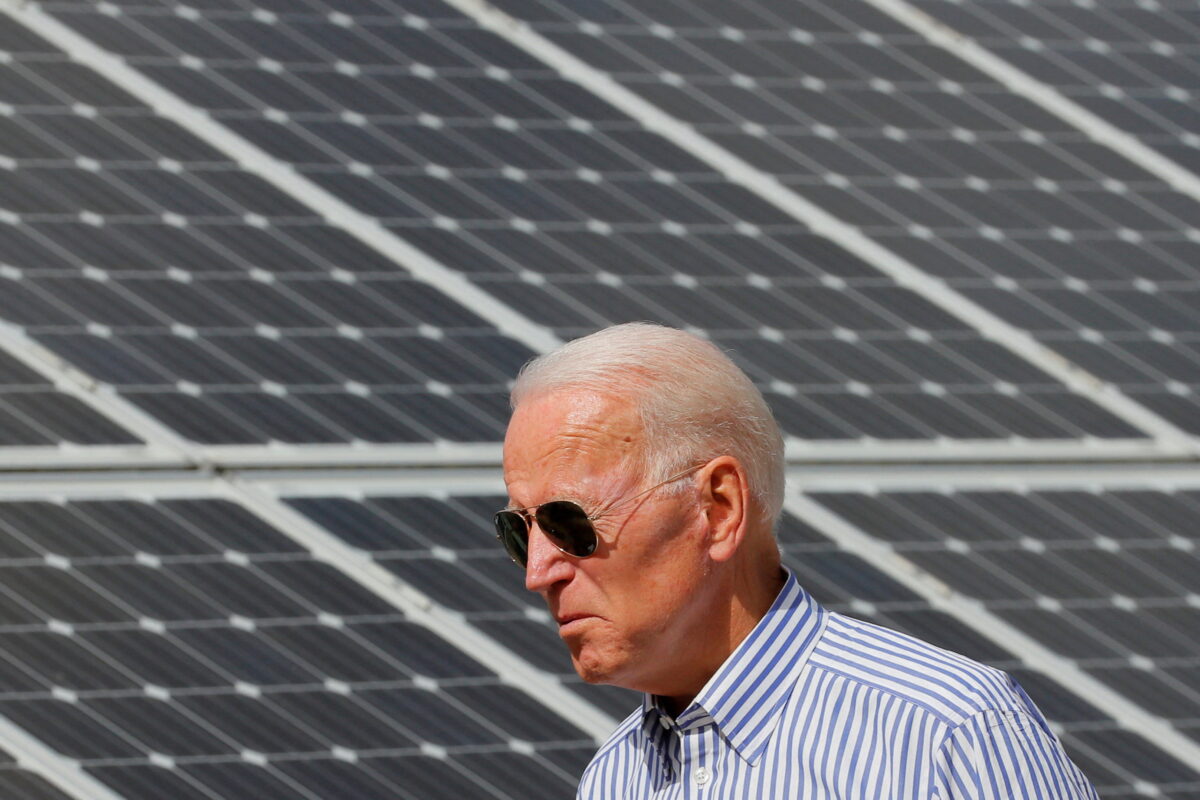 “Climate change is an emergency and in the coming weeks, I’m going to use the power I have as president to turn these words into formal official government actions through the appropriate proclamations, executive orders, and regulatory power that the president possesses,” Biden said during a brief speech, which he delivered at a former coal-fired power plant, Brayton Point Power Station in Somerset, Massachusetts.

The president announced the opening of offshore areas in the Gulf of Mexico to wind power.

“These areas cover 700,000 acres and have the potential to power over 3 million homes,” an accompanying White House fact sheet stated.

In addition, Biden noted that he would allocate $2.3 billion to the Federal Emergency Management Agency’s Building Resilient Infrastructure and Communities program, for what he described as infrastructure to withstand “extreme heat, drought, flooding, hurricanes, [and] tornadoes.”

He also drew attention to $385 million in spending for the Department of Health and Human Services, largely for community cooling centers and air conditioners.

“I would not plan an announcement this week on [a] national climate emergency. Everything’s on the table. It’s just not going to be this week on that decision,” she said.

“Taking action is something he will do if Congress won’t.”

Talk of a climate emergency has met with pushback from Republicans and other skeptics of expanded government power through climate-inspired mandates.

“Biden is using climate change as another excuse for the government to insert more control into your lives,” said Sen. Marsha Blackburn (R-Tenn.) in a July 20 post on Twitter.

“The Atlantic freaked out in 2019 over what Trump could do if he declared a national emergency: Martial law, control internet traffic, freeze financial assets.

“Weird how the media is now silent about what Biden could do to ‘climate deniers’ under a climate emergency,” commentator Glenn Beck wrote on Twitter, also on July 20.

In 2019, then president Donald Trump declared a national emergency in an effort to secure additional funding for a wall along the southern border. Biden formally ended that emergency in 2021 after issuing a proclamation describing the wall as a “waste of money.”

“By declaring a national climate emergency, Biden can unlock emergency executive powers already granted by Congress to aggressively combat the crisis,” the Center for Biological Diversity wrote in a 2022 document, “The Climate President’s Emergency Powers.”

Environmentalist Bill McKibben, who advocates a climate emergency declaration, complained on his Substack on July 19 that Biden’s “ability to postpone decisions has become the stuff of Washington legend.”

McKibben claimed that Hillary Clinton would have declared a climate emergency if she had been elected president, meaning “President Joe Biden should do it now.”

He cited “more powerful and destructive hurricanes and tornadoes” as evidence of a climate crisis gripping the country.

Experts have refuted previous claims from Biden that tornadoes can be linked to man-made climate change.

The National Oceanic and Atmospheric Administration has likewise pointed out that little evidence supports a significant rise in the number of Atlantic hurricanes or other tropical storms due to greenhouse gas emissions.

Yet, they concluded that “it is likely that greenhouse warming will cause hurricanes in the coming century to be more intense globally and have higher rainfall rates than present-day hurricanes.”

The former Brayton power plant where Biden spoke has been acquired by energy giant Avangrid, which intends to convert it to a facility for manufacturing offshore transmission cables for wind turbines.

Biden noted that the CEO of a company involved in the project, Vineyard Wind, had “joined [him] at the White House this month.”