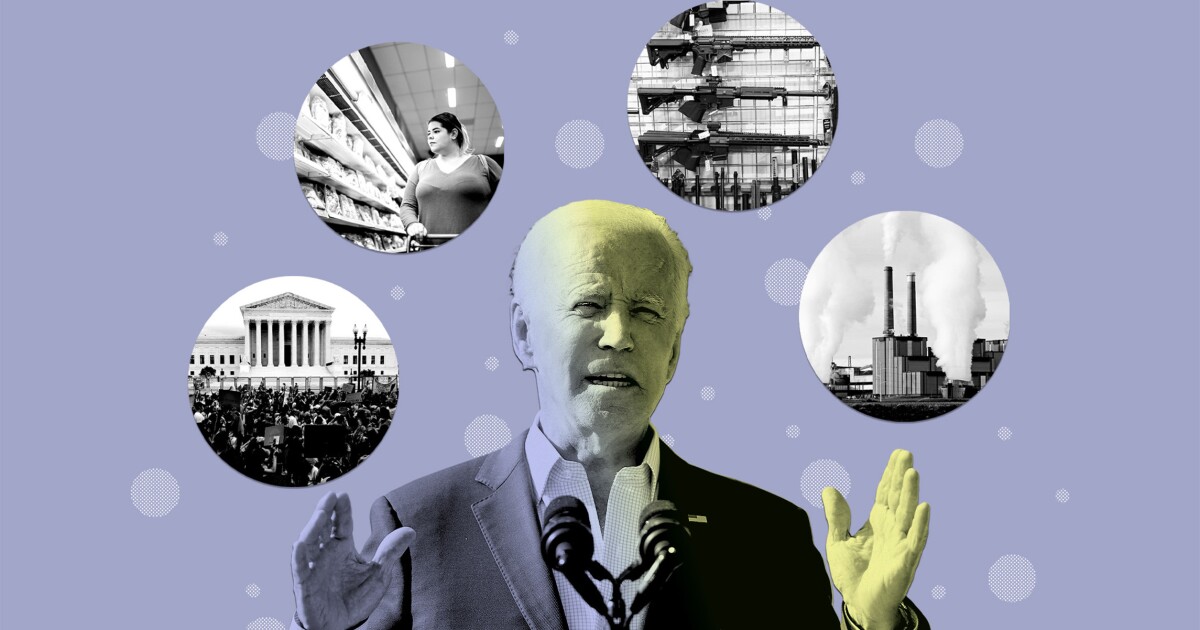 President Joe Biden had a simple message for voters in Cleveland when he went to defend a provision of the first big spending bill he signed into law: Everything good about the economy was the result of his policies. In contrast, everything bad was the fault of someone else.

“The previous administration lost more jobs on its watch than any administration since Herbert Hoover — that’s a fact — all based on failed trickle-down economics that benefited the wealthiest Americans and hit the middle class and working people the hardest,” Biden told the crowd earlier this month. “But we came in with a fundamentally different economic vision: an economy that grows from the bottom up and the middle out. It’s good for everyone, because when the middle class does well, the poor have a ladder up, and the wealthy still do very well.”

Biden was referring to the nearly $2 trillion American Rescue Plan, which remains his most significant legislative victory, passed along straight party lines through the reconciliation process. He was in Ohio to tout the act’s role in shoring up retirement plans. “Not one single solitary Republican voted for … this legislation,” he said.

Yet some economists believe this legislation, coming fast on the heels of over $3 trillion in COVID-19 stimulus spending signed into law by the previous president, contributed to the inflation the country is now experiencing. These spikes in consumer prices were recently running at a 41-year high. Biden had noticeably less to say about that.

“We’ve made incredible … progress on the economy from where we were a year and a half ago,” he said. “We got a long way to go because of inflation and because of the — I call it ‘the Putin tax increase,’ ‘Putin’ because of gasoline and all that grain he’s keeping from being able to get to the market.”

“Now, I’m fighting like hell to lower costs on the things that you talk about around your kitchen table,” Biden concluded. The actual White House-approved turn of phrase on inflation is “Putin’s price hike.” Still, the general point stands: Without Biden’s spending, the economy would still be at or near pandemic lows, but inflation is primarily the product of Russia’s invasion of Ukraine rather than any fiscal or monetary policy.

Despite Harry Truman’s “buck stops here” catchphrase, Biden is hardly the first president to take credit for positive news while deflecting blame for the negative headlines. Presidents receive a disproportionate amount of credit or blame for whatever happens in the country during their administration, especially on the economy.

But Biden campaigned on governing experience, including the ability to reach across the aisle and get difficult things done. He has often claimed to have played a major role in Democratic legislation that passed during his 36 years in the Senate, a source of irritation for some of his 2020 primary opponents. In a viral moment a year ago viewed millions of times on social media, Biden dropped his voice to a whisper as he claimed responsibility for various policy successes.

“I got them $1.9 trillion in relief so far,” he whispered at one point. “They’re going to be getting checks in the mail that are consequential for childcare.” Later, in response to a reporter’s question, Biden whispered, “I wrote the bill.”

The problem for Biden is that the negatives are beginning to multiply with the midterm elections now just months away. The Supreme Court is frustrating Biden on abortion, guns, environmental regulation, and executive power. Gas prices remain high. A recession looms as the Federal Reserve labors to bring inflation back under control. As a result, Biden’s party seems poised to lose the House and, possibly, the already 50-50 Senate.

That’s a constellation of events that threaten to make Biden the braggart take a backseat to Biden the innocent bystander. He can possibly make some inroads ahead of the midterm elections by running against particularly sweeping state-level abortion bans or “ultra-MAGA” Republicans. But an economic slowdown would undercut his best talking points, just as it did for former President Donald Trump two years ago, and thrust the issues on which he has some of his lowest job approval ratings to the top of public concern.

A generation after Democrats won control of Washington with the mantra “It’s the economy, stupid,” Biden, who had already been in Washington for decades by then, is unlikely to replicate that feat with a slogan of “It’s Vladimir Putin and Mitch McConnell’s fault, Trumper.”