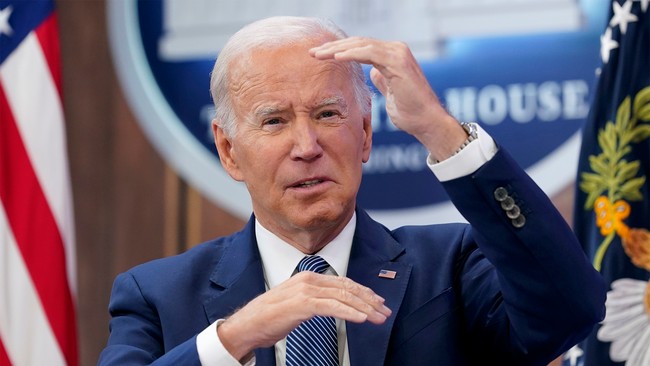 As the dust settles on the midterm elections, and the Republican Party emerges victorious in their bid for control of the House of Representatives, we can take a moment to reflect on the reasons behind the outcome. But, as we move forward, we must not forget the underhanded tactics employed by the Biden administration in their bid to influence the outcome of the election. It is this kind of deceitful behavior that undermines the integrity of our democratic process.

Make no mistake, Democrats engaged in a nationwide bribery of young voters by handing them a $10,000 check to motivate them to go to the polls and vote for their pals in the government. Every court so far has struck down the student debt relief as an unconstitutional exercise of executive power. The administration’s decision to implement this plan without Congressional approval or support shows a blatant disregard for the rule of law and the constitutional separation of powers. Despite having a team of lawyers at their disposal, they chose to move forward with this illegal measure in a desperate attempt to avoid a Republican victory in the elections.

It is unfortunate that President Joe Biden’s attempt to offer student debt relief as a means of mobilizing voters was ultimately successful. Despite the Republican Party’s strong showing in the midterm elections, they fell short in key Senate races that were initially projected to go their way. It is important to note that encouraging voter turnout is a crucial aspect of maintaining a strong democracy. However, the use of executive power to implement an unconstitutional plan to offer financial incentives to voters is a blatant abuse of power and runs counter to the values of our democratic system of government.

The most glaring evidence that suggests that Biden’s offer of student debt relief was a ploy to sway voters in the midterm elections is that the average student debt is nearly $35,000, with interest accruing over time and driving many borrowers into debt that is higher than the cost of their education. Worse yet, many borrowers have debts totaling over $100,000. Furthermore, the plan offered no restrictions on tuition increases or measures to address the root causes of student debt. It was a temporary solution that did not address the systemic issues at play and served only as a political maneuver that was used to garner support in the midterm elections. It is imperative that more comprehensive and effective measures be implemented to address the student debt crisis in the United States.

Student debt is a concern that transcends party lines. It is inexplicable that colleges endowed with generous donations from affluent donors continue to raise tuition with flimsy justification. These institutions should not require students to subsidize their lavish, billion-dollar athletic facilities and other unneeded buildings that offer few employment opportunities.

This supposed relief is far more nefarious than it appears at first glance. This is a calculated ploy that will exacerbate divisions within our country and generate further support for the preposterous idea of court packing. Virtually every reputable legal scholar agrees that the Supreme Court will rule student debt relief unconstitutional. If this occurs, it will certainly inflame divisions within the United States and further erode the credibility of the Supreme Court, as Biden and all Democrats subsequently deride Republican and so-called Trump loyalists on the Court for prioritizing their political ideologies over the law and denying student debt relief to millions of Americans.

It seems the only way to avert the consequences of Biden’s action is for the Supreme Court to rule it unanimously, 9-0, as unconstitutional, with a liberal justice ideally writing the opinion of the Court as the cherry on top. This would be a devastating blow to Biden’s strategy and the Democratic Party, but not as a political action. Rather, it would be a considered and unbiased decision based on the Constitution.

Student debt relief is merely a distraction from the many shortcomings of the Biden administration and the Democratic Party during Biden’s term. Skyrocketing inflation has made it increasingly difficult for struggling Americans to put food on the table, and rising gas prices are among the many failures that have inflicted deep harm on the pockets of Americans. However, Biden now seeks to offer half a trillion dollars in student debt relief, further exacerbating the already strained federal budget, in order to gain a few votes in favor of his short-sighted strategy to address a long-term, but easily solvable problem.

Regardless of the outcome of the student debt relief case at the Supreme Court, it is clear that politicians prioritize votes and power over the American people. They will use shiny ideals and bribes to manipulate the electorate and secure their votes. This is a fundamental flaw in our political system and must be addressed to ensure that the interests of the people are truly represented.