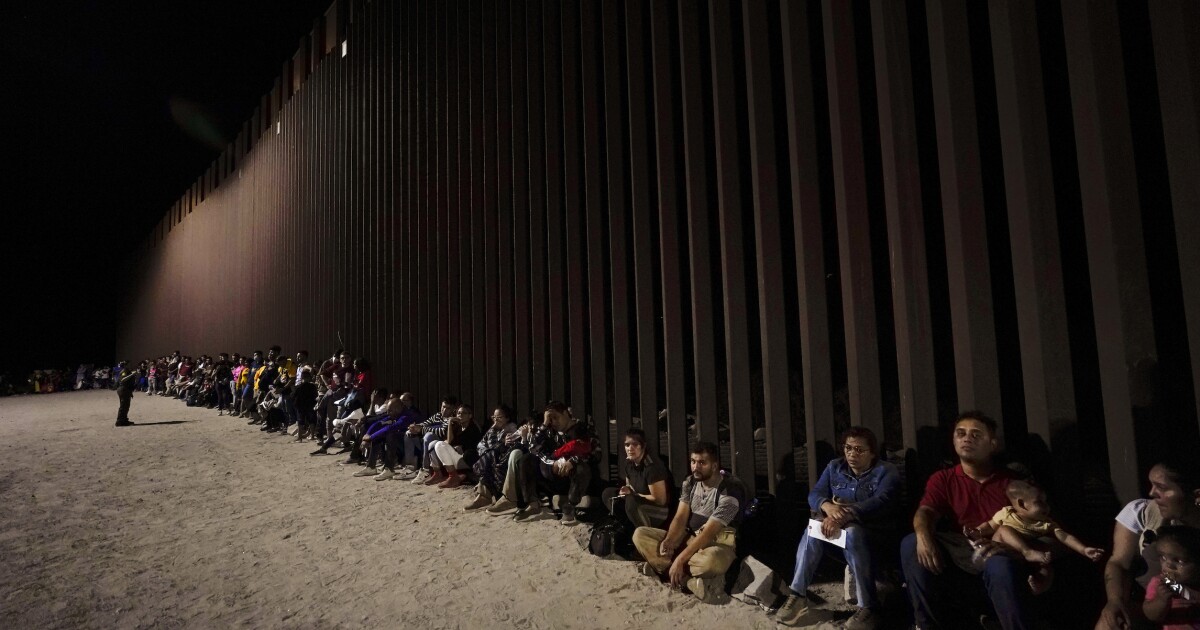 The Biden administration released bad news for Democrats just two weeks out from the midterm elections, announcing late Friday that there had been 2.4 million border crossings by illegal immigrants in fiscal 2022 — a new record.

Republicans and some border state Democrats have hammered the White House since President Joe Biden took office over surging illegal immigration, saying the situation has dissolved into chaos and drawing a sharp contrast with low numbers of crossings under the Trump administration. That point was driven home by the new Department of Homeland Security data.

BIDEN DRAWS A LINE ON ABORTION. WILL DEMOCRATS FOLLOW?

The White House was put on the defensive at a bad time for Biden, who has tried to keep the focus on issues like abortion, student loans, and the dangers of “MAGA” Republicans rather than unfriendly topics like immigration and inflation.

“Over fiscal year 2022, 2.4 million encounters happened on the southern border,” a reporter began in a question to White House press secretary Karine Jean-Pierre during Monday’s press briefing. “Republicans have their arguments about that. What’s the White House’s explanation as to what happened and why?”

Jean-Pierre responded that falling regimes and economic collapse in Venezuela, Nicaragua, and Cuba are causing millions to flee those nations, which she said is impacting the entire Western Hemisphere thanks to a 245% increase in immigration from those three countries. She also accused Republicans of using the immigrants as political pawns.

But the press secretary also touted a newly announced Biden initiative to turn away Venezuelans at the southern border, noting how it successfully suppressed crossings originating from that country since being announced on Oct. 12.

“Since the launch of this joint enforcement action, we’ve seen the number of Venezuelans attempting to cross the southern border decrease sharply by more than 85%,” she added. “We are doing the work every day to make sure that we deal with what we’re seeing at the southern border.”

Whether that program, along with plans to deploy troops from 25 states and U.S. territories to the border, can change perceptions just two weeks before Election Day remains to be seen.

Biden’s approval rating on immigration is just 36%, with 60% disapproving, per the RealClearPolitics average. A NewsNation poll found that the public favors Republicans to improve the immigration situation by a 7-point margin. And while Biden loudly decried Florida Gov. Ron DeSantis’s (R) decision to fly immigrants from San Antonio to Martha’s Vineyard, Massachusetts, a Telemundo poll of Hispanic voters in Florida found that a majority of them (50%-43%) supported it.

The DHS figures released Friday indicated border crossings were up 27% over 2021, which was the previous all-time record, and 419% over Donald Trump’s last year in office. Nearly 4.7 million immigrants have illegally crossed the border since Biden took office, which is roughly equivalent to the population of Louisiana.

GOPers also point to issues beyond the sheer number of crossings. For example, cartels made an estimated $13 billion smuggling immigrants across the border, and more than 850 immigrants died in fiscal 2022 while trying to cross, another record. Lastly, more than 10,000 pounds of methamphetamine was seized at the border in September, and fentanyl seizures set yet another new high.

Biden draws plenty of criticism from the Right over the issue, with his latest moves slammed as a last-ditch effort to save face with the electorate.

“Biden cares more about performative politics and his party’s midterm chances than he does saving lives and addressing the humanitarian crisis Democrats created at the southern border,” Republican National Committee spokesman Will O’Grady previously told the Washington Examiner.

Republicans are confident voters prefer their approach to immigration. A trio of Trump-aligned Hispanic women is hoping to flip three Texas border House districts, and buses sending immigrants to places like New York City have some Democratic big shots also calling on Biden to do more.

But the president is likely wary of drawing criticism from the other side, having seen former boss Barack Obama labeled the “deporter in chief” before leaving office.

“This decision comes after President Biden’s declaration less than a month ago that the pandemic is over, highlighting the hypocrisy behind the continuation of the so-called public health order,” she said in a statement. “All people should have the right to seek safety and protection, not just a select few.”