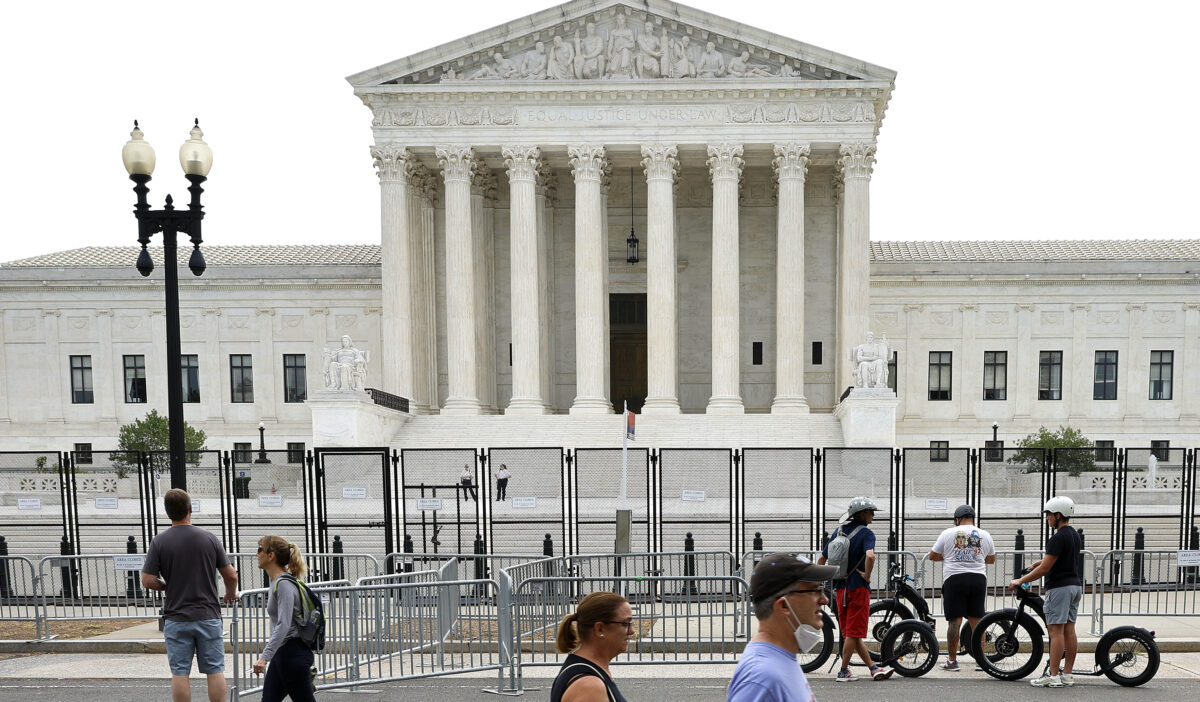 As the Biden administration reels from a string of recent legal defeats, political analysts hail the U.S. Supreme Court’s latest ruling, West Virginia v. EPA, as but one component of a new, broad-based approach that the courts are taking to halt a century-long effort by progressives to empower the administrative state and rule Americans by bureaucratic decree.

Dating back to President Woodrow Wilson 100 years ago, progressive presidents, including Franklin Roosevelt, Lyndon Johnson, Barack Obama, and Joe Biden, have worked to transfer law-making authority from Congress to their executive agencies. Wilson, the father of modern-day progressives, believed the Constitution, with its separation of powers, was an outdated document and that professional bureaucrats were superior at decision-making, compared to the time-consuming and compromise-ridden process of passing laws through elected representatives.

Wilson wrote in the 1887 article “The Study of Administration” that “the many, the people, who are sovereign [under the Constitution] have no single ear which one can approach, and are selfish, ignorant, timid, stubborn or foolish.”

“The greatest revolution since the Constitution in many ways has been this movement away from legislatures into agencies,” Matthew Spalding, Dean of Hillsdale College’s Graduate School of Government, told The Epoch Times. “The crisis here is the movement away from consent,” as Americans increasingly lose their right to have a voice in setting the laws and regulations that control their lives.

In 1984, for example, the Supreme Court handed down a decision that came to be known as the Chevron Doctrine, ruling that federal agencies had the authority to decide the scope of their power in situations where congressional authorization was ambiguous. Since this ruling, Chevron v. National Resources Defense Council, the courts have sided with federal agencies in cases where the authority of agencies was challenged.

Now, for the first time in a century, a series of rulings from federal courts have put up a roadblock to halt administrative encroachment. Two factors have brought about this change. First, the appointment by the Trump administration of 234 federal judges, including three Supreme Court justices. And second, the Biden administration’s unusually brazen attempts to push federal agencies well beyond their legal authority in order to impose a left-wing agenda on the United States without popular consent.

In the case of West Virginia v. EPA, the Environmental Protection Agency (EPA) attempted to force America’s electric utilities to switch from fossil fuels to wind and solar. On June 30, the Supreme Court ruled that the Biden administration had no authority to do so.

“For years, unelected bureaucrats in the administrative state have been trying to destroy our fossil fuel industries by transforming the EPA into a communist-style central planning authority because they know they can’t get their radical environmental policies passed through Congress,” said West Virginia State Treasurer Riley Moore in an official statement, lauding the decision as “a victory for the rule of law.”

“Part of the problem is Congress writing these broad laws that leave a lot of room for interpretation by the agencies that are supposed to execute the laws,” William Shughart, senior fellow at the Independent Institute, told the Epoch Times. “That has led to this explosive growth in the administrative state. The West Virginia ruling applies the brakes to that growth.”

One of the key components of this Supreme Court ruling is the “major questions doctrine.” This is the concept that agencies, which are unelected by and unaccountable to the public, cannot make up rules on issues of major importance to Americans without clear authorization from elected representatives.

“The Supreme Court decision speaks to the legal flaws with trying to mark an entire industry for termination,” Jonathan Berry, a partner at Boyden Gray & Associates, told The Epoch Times. “What the Supreme Court is saying is that when you take on initiatives of major economic or political significance, those measures have to be authorized by a clear statement from Congress.”

“One of the most profound aspects of this ruling is its portability across regulatory regimes,” Berry said. In rendering its West Virginia decision, the Supreme Court looked at prior rulings, including those against the Centers for Disease Control and Prevention (CDC) and the Occupational Safety and Health Administration (OSHA). “The common thread across those cases is the executive branch using an administrative agency to wade into policy areas beyond what Congress authorized,” Berry added.

“What we’re seeing here is extremely significant,” Spalding said. “The way the Court works is they do these things in different cases here and there, but they’re putting a doctrine together that ultimately builds up to a larger case. The heart of the matter is the unconstitutionality of essentially shifting legislative authority outside of the legislative branch into these agencies.”

“There are already tons of lawsuits out there that have been winding their way through the legal system for years,” Bonner Cohen, senior fellow at the National Center for Public Policy Research, told The Epoch Times. “Some of those lawsuits will eventually make it to the Supreme Court, but a lot of them may be dealt with at lower court level simply because people can now point to the precedent that was set in West Virginia v. EPA.”

Last week, a Trump-appointed federal judge temporarily blocked orders by the U.S. Department of Education (DOE) that attempted to force states to, among other things, allow transgender children to compete in sports in schools according to their gender identity rather than their gender at birth. Twenty state attorneys general brought a suit against the DOE directive, arguing that the authority to decide such policies “properly belongs to Congress, the States, and the people.”

Two other areas where administrative overreach by the Biden administration will likely be challenged next are a directive from the Securities and Exchange Commission (SEC) regarding “green accounting” (that is, accounting that factors environmental costs in the financial results of operations) and gun control initiatives from the Federal Bureau of Alcohol, Tobacco and Firearms (ATF).

In a case that closely parallels West Virginia v. EPA, the SEC issued a directive that all listed companies must provide audited reports on the greenhouse gas emissions of their operations, as well as those of their suppliers and customers. In addition, companies must detail their strategies to reduce such emissions. Critics believe this will open companies up to a rash of environmental lawsuits and actions by activist asset managers like BlackRock, State Street, and Vanguard. West Virginia Attorney General Patrick Morrisey was among the first state officials to threaten legal action in response.

The ATF has been attempting to expand the legal definition of which gun parts constitute a firearm in an effort to implement a Biden administration initiative, which failed to pass Congress, against unregistered homemade guns, thus turning a formerly legal practice into a felony. A lawsuit against this has already been filed by the Gun Owners of America. In addition, the ATF was found to be keeping records of “several hundred million” gun purchases, despite the fact that Congress explicitly outlawed a federal gun registry.

Such attempts to circumvent public consent by legislating through unelected federal agencies inevitably lead to a loss of public trust in government.

“If there’s no consent, no responsibility, no check-back system, then you really are undermining public confidence in that process,” Spalding said. Regarding the ATF and gun control measures, a June poll by NPR/Ipsos found that, while most gun owners said they would accept universal background checks, they “harbored a deep distrust of government.”

“The more that this administration steps over the line and claims for itself powers that the peoples’ representatives in Congress have not given it, the more we should expect a decline in trust and in legitimacy,” Berry said.

As the courts begin to push back against administrative overreach, however, the backlash from the political left has been escalating, including demands for “packing” the Supreme Court with more left-leaning judges, or even abolishing the Court altogether.

Following the overturning of Roe v. Wade, President Biden stated, “We cannot allow an out-of-control Supreme Court, working in conjunction with extremist elements of the Republican Party, to take away our freedoms and our personal autonomy.” A recent survey by Rasmussen and the Heartland Institute found that, in the wake of the EPA decision, the overturning of Roe v. Wade, and the pro-Second Amendment Bruen decision (regarding concealed weapons), most Democrats and younger voters see the Court as a racist and sexist institution and want to pack it with progressive judges, remove it, or replace it.

“These findings clearly show that most Democrats and young Americans do not respect the sanctity of the Supreme Court when it issues decisions that run counter to their agenda,” Heartland Institute Research Fellow Chris Talgo told The Epoch Times. “As a former U.S. history and American government teacher, I can say without a doubt that our education system is not teaching the basics when it comes to civics. Most American students cannot name the three branches of government, let alone understand the role of separation of powers. This does not bode well for the future of freedom, seeing as how young voters are hostile to the very institutions that preserve our freedom.”

The Justice Department, for example, permitted weeks of intimidating protests outside the homes of conservative Supreme Court justices after the opinion to overturn Roe v. Wade was prematurely leaked prior to the formal ruling. Following the arrest in June of an armed man who was charged with attempted murder at the home of Justice Brett Kavanaugh, Sen. Ted Cruz (R-Texas) demanded that U.S. Attorney General Merrick Garland “detail the steps the Department of Justice is taking to protect our Supreme Court Justices in the wake of an unprecedented harassment and intimidation campaign.”

House Speaker Nancy Pelosi (D-Calif.) was criticized for taking weeks to bring a bill protecting Supreme Court justices and their families to a vote, even after the alleged assassination attempt against Justice Kavanaugh. When the bill was put to a vote, 27 Democrats voted against it.

Supreme Court Justice Elena Kagan, who disagreed with the majority in the West Virginia case, argued that the courts must defer to the EPA, which she deemed the “expert agency,” and allow the agency to interpret the scope of its own power. Critics of this approach, however, remain skeptical of granting too much power to experts and question whether administrators are in fact experts when it comes to issues like national energy policy or making personal medical decisions.

“These are career government employees,” Cohen said. “They are not experts.”

“Look at the experience the country had during the pandemic, where we had such experts as Dr. [Anthony] Fauci and Dr. [Deborah] Birx and others throughout the federal government who completely mishandled the public health response to COVID-19,” Cohen said. “If these are the experts, we need to free ourselves from experts, because they got it spectacularly wrong.”

“The invocation of an emergency is not a justification for combining the powers of government into a single person,” Berry said. “That’s the definition of tyranny.”

Kevin Stocklin is a writer, film producer, and former investment banker. He wrote and produced “We All Fall Down: The American Mortgage Crisis,” a 2008 documentary on the collapse of the U.S. mortgage finance system.