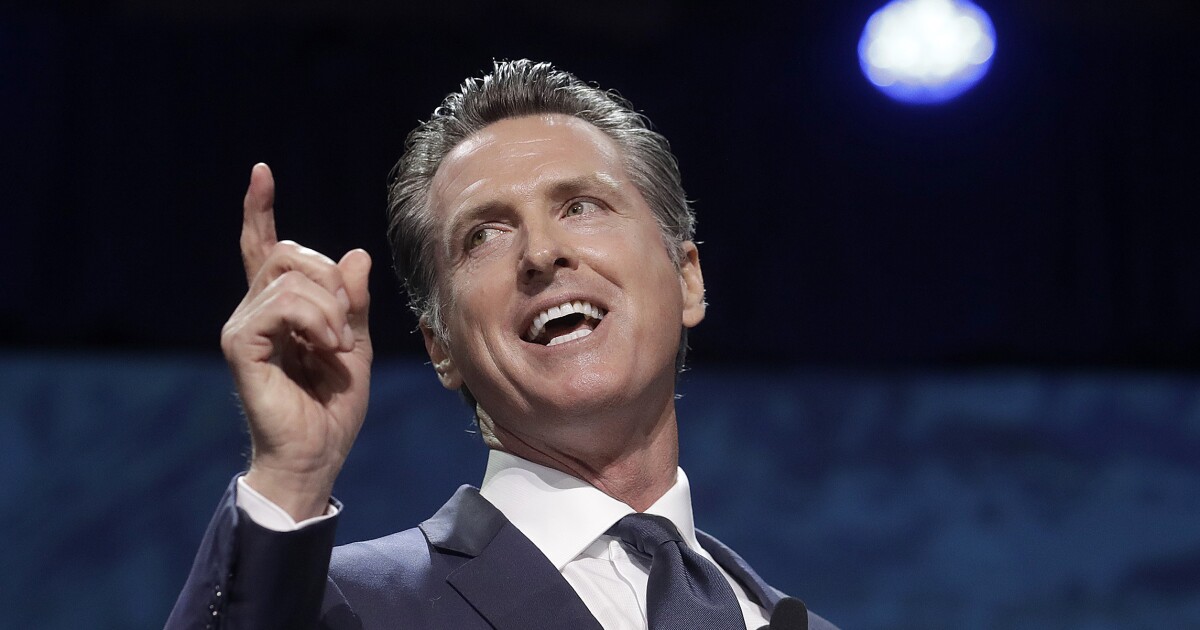 The 2024 implications of California Gov. Gavin Newsom running television advertisements in Florida are politically transparent to many Democrats.

But Democrats are nonetheless cheered to see a major party leader use the bully pulpit to defend liberal values and initiate a confrontation with Republicans, specifically top GOP presidential contender Florida Gov. Ron DeSantis, who is about as disliked on the Left as former President Donald Trump. Newsom is likely to cruise to reelection this fall in the midterm elections, and he is viewed as a 2024 contender, especially if President Joe Biden, whose popularity ratings have sunk of late, declines to seek a second term.

“He’s making himself the opposition,” a national Democratic strategist said of Newsom.

Democratic insiders are far from sold on Newsom as a leading 2024 contender, with one party operative in California questioning the governor’s national viability. “A ton of people here just roll their eyes at him. He isn’t well-respected by the legislature and hasn’t gotten a ton done. He lacks focus — energy isn’t a replacement for strategy,” said this strategist, who requested anonymity for fear of alienating an incumbent governor on the verge of reelection.

But in other quarters of the party, Newsom’s fighting spirit is enjoying a positive reception, especially as Democrats sour on Biden. Grassroots Democrats and some party insiders are concluding the president is too old and lacks the vigor to wage the fight against the Republicans that the current political moment calls for. From that vantage point, Newsom’s “energy” is not only welcome but appears sufficiently strategic.

Said a Democratic operative in Washington: The governor is “someone who’s stepping up to play some defense.” In a veiled shot at Biden, this Democrat added, “It’s not happening otherwise.”

The president’s job approval ratings are in free fall, coming in at 33% nationally in a new Siena College poll for the New York Times and 37.7% in the RealClearPolitics average. Yet most Democratic insiders interviewed for this story requested anonymity. They were hesitant to appear publicly opposed to Biden or engaged in fomenting a Democratic rebellion against his administration. But if the 79-year-old president does step aside in 2024, they expect Newsom to run.

The question is how strong of a candidate he might be in the primary and the general election.

Newsom could be attractive to a liberal base itching for aggressive leadership in the aftermath of the Supreme Court ruling in Dobbs v. Jackson Women’s Health Organization, which overturned Roe v. Wade and eliminated federal protections for abortion rights. In the spot the governor aired in Florida during the July Fourth holiday, he took direct aim at DeSantis, who promotes the Sunshine State as a “free state,” not to mention Trump and Republican social policies.

“Freedom, it’s under attack in your state,” Newsom says, speaking straight to the camera. “Your Republican leaders? They’re banning books, making it harder to vote, restricting speech in classrooms, even criminalizing women and doctors. I urge all of you living in Florida to join the fight — or join us in California, where we still believe in freedom.” Newsom also opened an account on Truth Social, the Twitter alternative founded by Trump and run by his allies.

The looming GOP takeover of Congress in the midterm elections would provide yet more fodder for the 54-year-old California governor to build a national profile. A Newsom political adviser did not respond to a text message requesting comment for this story. But in an email to grassroots supporters last week, the governor said he invested $100,000 in campaign funds to “fight” to reclaim the word “freedom” from DeSantis and the Republicans.

However, Newsom has vulnerabilities that could pose obstacles to any White House aspirations.

To begin with, he was forced to fend off a recall campaign last September. Sure, he easily defeated Republican Larry Elder, avoiding the fate of former Democratic Gov. Gray Davis. But his political standing in the state never fully rebounded. Yes, Newsom is gliding to reelection despite a developing GOP electoral wave. But the governor is shielded by how deeply Democratic California has become over the years.

And in a competitive national presidential primary, never mind general election, Newsom might be compromised by his governing record. Under his leadership, California is experiencing rampant homelessness, rising crime, and cost-of-living pressures. Meanwhile, on the governor’s watch, decennial redistricting resulted in California losing a seat in Congress for the first time in state history.

“The overall wrong track has gone up since the recall. I think it’s one of the reasons Newsom wants the DeSantis fight. He needs an opponent to avoid discussing his own record,” said Rob Stutzman, a Republican operative in Sacramento who has been critical of Trump.

Newsom has two additional problems unique to the Democratic presidential primary, say some party insiders. He’s a white male, and in a scenario where Biden is exiting the stage, he might have to compete with a rather prominent fellow Californian for the nomination: Vice President Kamala Harris.

Harris has myriad political flaws. But she would not only enter the race as the sitting vice president, presumably with a direct line to the same California donors Newsom might seek out; she is both female and nonwhite, commodities in a Democratic Party that particularly values ethnic and gender diversity. And if Harris’s mediocre poll numbers are not enough to box out Newsom, he could find himself running against a range of attractive Democratic contenders.

Among those mentioned are Transportation Secretary Pete Buttigieg, who ran for president in 2020; Commerce Secretary Gina Raimondo; Michigan Gov. Gretchen Whitmer (if she wins reelection); and Colorado Gov. Jared Polis. And that’s before the typical cadre of senators jump in.

“The bigger issue is that Newsom theoretically pulls from the same base as Kamala Harris, and would California backers back a sitting governor or a sitting VP who is also a black woman?” said Ed Espinoza, a Democratic operative in Texas who hails from California. “Even if her numbers aren’t great, her California politics are, and that’s a tough path for him.”