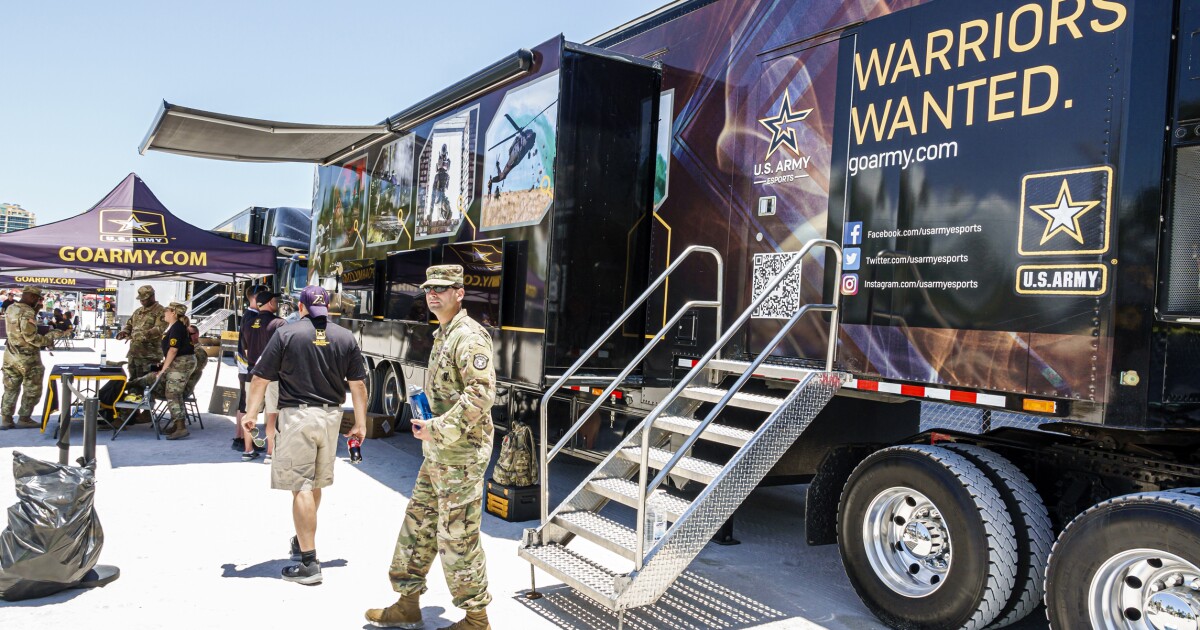 The reason: All of the military services, except for the tiny Space Force, are at risk of failing to meet their recruiting goals for this year.

“While we are on track to make our accession goals, this is arguably the most challenging recruiting year since the inception of the all-volunteer force,” Lt. Gen. David Ottignon, deputy Marine Corps commandant for manpower and reserve affairs, told the Senate Armed Services Committee in April.

Military recruiters always had their work cut out for them, especially in the 1990s when military pay and benefits, specifically for enlisted recruits, didn’t stack up to the civilian job market.

Or in the 2000s, when the United States was in shooting wars in Iraq and Afghanistan and the risks of being deployed to a combat zone were real.

But something’s different this time around.

All the services are struggling to attract new recruits, according to a report by NBC News last month, despite the offers of generous signing bonuses and, in the case of the Army, relaxed entrance requirements.

The Army is in the deepest hole, admitting in March that it would have to shrink the size of the active-duty force by 12,000 soldiers this year, blaming a tight job market with unemployment at 3.6%, as well as coronavirus restrictions that kept recruiters out of high schools, a prime source of enlisted recruits.

America is proud of its all-volunteer military, which is unarguably the best-trained, best-equipped, most lethal fighting force in history.

From World War I and World War II and through the early 1970s, the U.S. used conscription to fill the ranks of the armed forces, but when the unpopular Vietnam War ended, so did the draft.

While the Selective Service System remains and males must still register within 30 days of their 18th birthday, there has been no draft since 1973.

Instead, the military has counted on patriotism, education benefits, a quest for adventure, and a willingness to sacrifice for the good of the nation to attract volunteers.

The result over the decades has been a resounding success story, producing a more professional, more motivated military that is the envy of the world.

But a confluence of societal changes and economic factors now threatens what has been the hallmark of America’s preeminent status as the world’s greatest military.

More young people are going directly to college out of high school, fewer come from families where military service is a tradition, and a decreasing percentage of the target age range can’t meet the physical fitness requirements or pass the background check for mental health issues or criminal offenses.

But the much bigger problem is that military service has lost its luster for Generation Z, which includes those ages 18 to 25 who feel like they have better options, Spoehr argued.

“People don’t really see why they should serve their country, don’t see any benefit for them, and to some degree, not even convinced that their country is worthy of their service, which is the most troubling part of all this to me,” Spoehr said.

Once one of the most trusted and revered U.S. institutions, the military’s reputation has hit today’s hyperpartisan political environment.

A poll released by the Ronald Reagan Presidential Foundation in November found a dramatic decline in the number of people who said they have a great deal of trust and confidence in the military, down from 70% three years ago to just 45%.

That was true across all major demographic subgroups, including age, gender, and party affiliation. But most troubling for recruitment in the all-volunteer force, only one-third of adults under 30 have high confidence in the military, down 20 points since 2018.

“A lot of people believe the military is either woke and it’s being pursued as a social experiment or that it’s a racist, extremist breeding ground,” Spoehr said. “The middle ground, which the American military has enjoyed for almost all of its existence, as not being viewed as part of the political dimension, is eroding.”

So what’s the answer?

While progressive Democrats are pushing for a change to the law so that young women and young men would have to register with the selective service, no one seriously thinks the draft is coming back anytime soon, barring an existential threat to the nation.

“It’s almost like proposals to change Social Security. It’s radioactive. No one is going to say, ‘Let’s start drafting people again,’” said Spoehr, who thinks the only way out may be to reconnect younger people with the value of service in uniform.

“It’s a cliche, but part of the solution is to reacquaint America with its military again — and not just recruiters, but to get young people exposed to military people at a younger age before they’re high school seniors because nowadays high school seniors already know what they want to do,” he added.

The so-called civil-military gap is growing, as evidenced by a poll the Army conducted in March.

It showed widespread misconceptions about what life in the Army is like, especially among the Gen Z target audience.

Nearly a third of Gen Zers believe most Army jobs involve direct combat — they don’t — and almost half don’t think the Army allows time for recreation and hobbies — it does. Most were unaware of education benefits that provide full college tuition, homebuying assistance, free healthcare, parental leave, and early retirement after 20 years.

What they did say they want was a good salary, health insurance, paid time off, and to work for an organization with a “diverse workforce” that has a “positive impact on society.”

“Generation Z wants this different kind of work-life balance that baby boomers grew up with,” Spoehr said. “This growing civil-military gap, and I think it’s getting worse — it’s a generational thing. People always say the last generation, but I think this is the worst.”

The military is in a major transformation from manned platforms to robot ships and drone planes, which require far fewer troops.

It may be a future that’s driven by necessity as much as strategy.

Jamie McIntyre is the Washington Examiner’s senior writer on defense and national security. His morning newsletter “Jamie McIntyre’s Daily on Defense” is free and available by email subscription at dailyondefense.com.