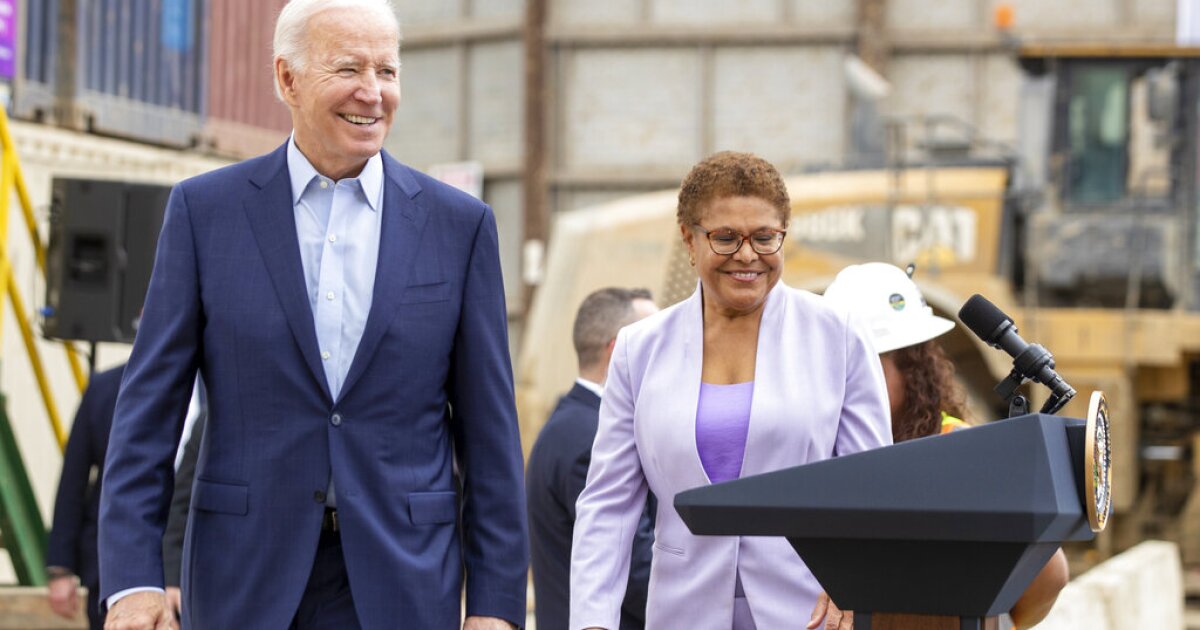 Caruso leads Bass by 3 percentage points among likely voters in the Southern California News Group poll, eroding the congresswoman’s double-digit advantage. If the election were held today, 39.8% of likely voters said they would cast a ballot for Caruso, compared to 36.8% for Bass, according to the survey, a statistical match that falls within the margin of error. Another 23.6% were undecided or declined to answer.

The results come days after Bass earned a campaign boost from President Joe Biden and as Democrats begin to lose traction with voters in key races nationally.

It is the second recent poll to show Caruso, a political neophyte, faring better than expected in the Nov. 8 race against Bass, a former Assembly speaker endorsed by prominent Democrats, including Biden.

Bass entered October with a 3 percentage point lead against Caruso among registered voters, 34% to 31%, down from a 12-point advantage in August, a Los Angeles Times–UC Berkeley Institute of Governmental Studies poll showed.

Among likely voters, Bass fared better, with 46% of the vote compared to Caruso’s 31%, yet still shrinking from a 21-point advantage in August.

Bent on “cleaning up” Los Angeles, Caruso has promised to address a homelessness crisis and bring down crime.

And while he has drawn support from Asian and Hispanic voters in the city, a victory for Caruso, once a registered Republican, would mark a turning point for the city’s deep-blue politics. Bass, by contrast, has the backing of influential political donors and the Democratic establishment up to the White House.

During a visit to Los Angeles last week, Biden praised the congresswoman, a finalist in the search for his vice presidential running mate in 2020, and reiterated his endorsement of the “soon-to-be Ms. Mayor.” The two appeared alongside current LA Mayor Eric Garcetti, a close Biden ally, and other California elected officials.

In contrast, Caruso has struggled to shake off Democratic skepticism.

“If I had a dollar for every late-election poll portending unexpected results,” quipped Gil Duran, a veteran Democratic operative and political columnist. “But everyone loves a nail-biter.”

Duran told the Washington Examiner that “an 18-point swing in likely voters in two weeks seems improbable,” even as Caruso “is flooding the airwaves.”

A Bass campaign spokesperson told the LA Daily News that the findings were inconsistent with other surveys.

Caruso has pumped millions of dollars into door-knocking efforts to drive voters to the polls and spent lavishly on television advertising. A flood of ads pushed the businessman within striking distance of Bass in the June primary, forcing her into a general election runoff.

Yet the new poll comes as Democrats face mounting challenges in the countdown to the November elections. The Democratic Party has fallen behind in the generic ballot in recent weeks as the share of voters concerned about the economy surges, according to a New York Times-Siena College poll.

Bass’s lead this summer grew in the wake of the Supreme Court’s abortion ruling, but the issue has begun to lose traction with voters worried about the high cost of living. Just 5% of likely voters in the Siena College poll said abortion was their top issue, a fraction of the share that pointed to inflation and the economy.

In the LA Daily News-J. Wallin Opinion Research survey, Caruso outpaced Bass on four of five issues facing the city, with the strongest advantage on managing the city’s finances, with 37.8% of the vote compared to 31%.

While the poll shows Caruso slightly ahead on issues of inflation and the economy, homelessness and poverty, and crime and public safety, his lead fell within the poll’s margin of error.

The candidates were closely matched in handling City Hall corruption.

“We can only definitely say that Caruso has an advantage with finance,” pollster Justin Wallin told the outlet. “The other ones, they’re too close to call. People view them both as credible players.”

The survey was conducted by J. Wallin Opinion Research between Oct. 15-17, with a margin of error of plus or minus 4.9 percentage points. It surveyed 400 likely voters in the city.