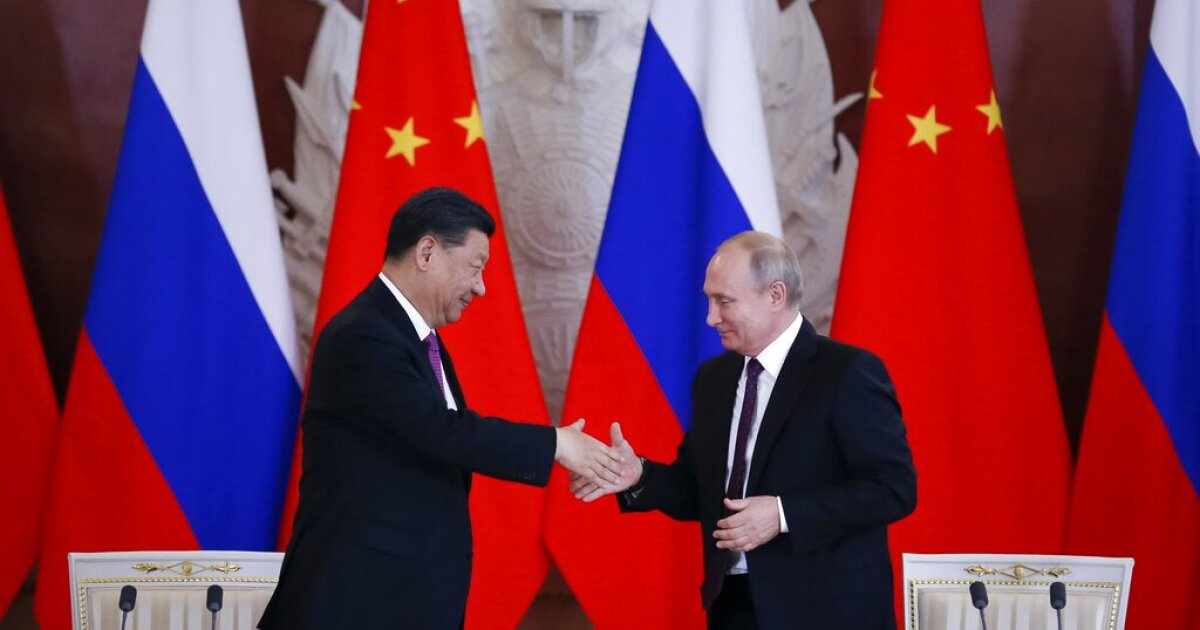 A Chinese state-owned company has been accused of aiding Russia’s military during its war against Ukraine — but the Biden administration insists it hasn’t seen China provide military equipment to the Kremlin.

China Electronics Technology Group Corporations 13th Research Institute was identified by the Commerce Department in a new report last week. The report alleges the company, along with its subordinate institution Micro Electronic Technology, has “supported, and continued to support, Russia’s military since the imposition of new controls.” The company, also known as CETC, is run by members of the Chinese Communist Party and is one of Beijing’s biggest defense companies.

The Commerce Department did not provide specific details on how exactly CETC was helping the Kremlin’s military. CETC has a history of collaborating with Russian companies, including teaming up with Ruselectronics in 2014, Kaspersky Lab in 2015, and Rostec State Corporation in 2017.

However, despite the report from the Commerce Department, the White House National Security Council said it had not seen evidence of the Chinese government boosting Russia’s war machine or of providing the Russian military with weaponry.

“This is normal course-of-business enforcement actions against 36 entities that have been backfilling for Russia, including in Lithuania, Russia, the People’s Republic of China, the United Kingdom, Uzbekistan, and Vietnam,” a National Security Council spokesperson told the Washington Examiner. “We have not seen the PRC engage in systematic evasion or provide military equipment to Russia.”

White House national security adviser Jake Sullivan also said last week that China had not been seen to have backed Russia during the conflict.

“For us, the No. 1 priority with respect to China, when it comes to the war in Ukraine, is that China not become militarily supportive of Russia through the provision of equipment,” he said. “No. 2 is that they not engage in wholesale or systematic undermining or evasion of U.S. sanctions. And on both of those, thus far, we have not seen China act in a way inconsistent with those two principles and certainly not at scale with respect to the economic relationship.”

In the wake of Russia’s invasion of Ukraine in February, the United States and its allies imposed a host of global sanctions and export controls banning the provision of military assistance to the Kremlin.

The Commerce Department also sanctioned a number of other Chinese companies “for their continued support of Russia’s military efforts since imposition of export controls in response to Russia’s invasion of Ukraine.” The department said that electronic supply companies Connec Electronic, King Pai Technology, Sinno Electronics, and Winninc Electronic, along with logistics company World Jetta Logistics (all of which operate in China) were also added to the Entity List “for providing support to Russia’s military and/or defense industrial base.”

The department said that “the backfill actions” of the Chinese companies, including CETC, “involved previously supplying items to Russian entities of concern and continuing to contract to supply Russian parties after Russia’s invasion of Ukraine, notwithstanding the collective restrictions put in place.”

“The U.S. government has identified the Chinese military as the armed wing of the Chinese Communist Party, and CETC as a Chinese military company,” McCaul told the Washington Examiner. “It’s ridiculous for the Biden administration to now try and separate CETC’s actions from the CCP. Either the Biden administration lacks competency on the CCP’s political economy or is trying to shield the CCP from accountability.”

McCaul also said last week that the Biden administration’s “feeble concept of ‘consequences’ will do little to deter the CCP’s ongoing support for Putin’s war crimes.”

This is not the first time CETC has been sanctioned by the U.S. or that its ties to the CCP have been highlighted. The company was sanctioned in 2020 for its role “in helping the Chinese military construct and militarize the internationally condemned artificial islands in the South China Sea.” The U.S.-China Economic and Security Review Commission’s 2020 report said CETC did that “with the endorsement of the National People’s Congress.”

The Pentagon dubbed CETC as among “Communist Chinese military companies” in 2020. The Treasury Department added CETC to its list of “Chinese Military-Industrial Complex Companies” in 2021. A 2021 report by the Congressional Research Service called CETC one of “China’s Top Defense State-Owned Companies.” The FBI said CETC “is responsible for the procurement, development, and manufacture of electronics for the Chinese military” back in 2010.

An archived version of the CETC website shows the group says it is “directly under the former Ministry of Information Industry” and is “under the correct leadership of the Party Central Committee, the State Council, and the Central Military Commission.” The Chinese state-run CGTN outlet called it a “major force of China’s defense electronics.”

CETC described itself as “an important state-owned backbone enterprise directly managed by the central government involving national security” and said it does “support tasks of national defense and military electronic information equipment.” CETC also said it is “the only military-industrial group in China that plays an important role in the three strategic fields of national ocean, space, and network” and that it provides “key components for various types of equipment in our army.”

In response to the latest round of sanctions, the Chinese Embassy in the U.S. said Wednesday: “We have been playing a constructive role in promoting peace talks and have not provided military assistance to the conflicting parties.” The Chinese Foreign Ministry also condemned America’s actions.