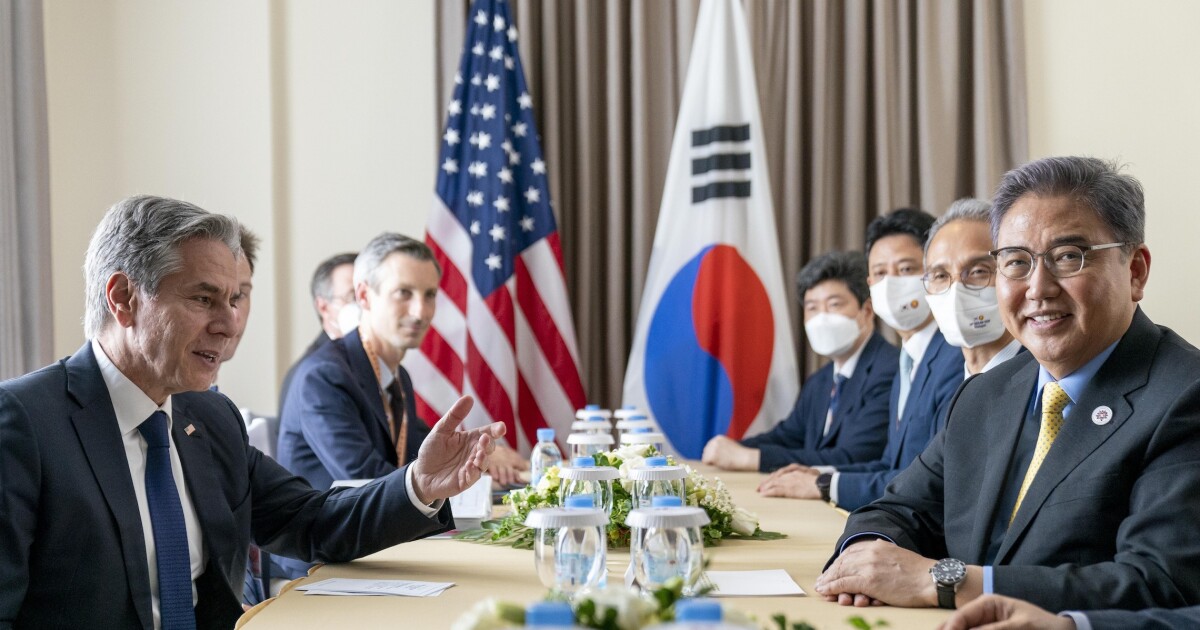 Chinese Foreign Minister Wang Yi is pressing South Korea against cooperating with the United States on military and security issues, raising the specter of another economic clash between Beijing and an American ally.

That’s a pointed warning at a moment in which Seoul appears to be making a substantial break with the conciliatory approach taken by then-South Korean President Moon Jae-in. South Korea’s new conservative government has held a flurry of high-level meetings with the Biden administration, with the stated goal of taking “our alliance … to even greater heights.” Beijing wants to forestall such a prospect, as South Korea’s economic and military cooperation could add clout to the so-called alliance of democracies that President Joe Biden hopes will coordinate to deter the Chinese Communist regime.

“As history and reality have shown, China and the ROK have always been neighbors who share a common stake in security and partners who need each other,” Wang said following a meeting between Wang Yi and his South Korean counterpart. “China and the ROK need to take stock of the useful experience and keep bilateral relations moving forward in the right direction.”

“We are on the same page on many, many things, including political, economic, and military issues,” South Korean Foreign Minister Park Jin said during an Aug. 5 meeting with Secretary of State Antony Blinken on the sidelines of a diplomatic summit in Cambodia. “We are faced with common challenges, and we are agreed that we will closely cooperate to deal with these challenges and maintain our ironclad alliance between the Republic of Korea and the United States.”

Park’s comments in various encounters with Blinken have signaled that the U.S. and South Korea will expand their cooperation beyond the traditional focus on deterring threats from North Korea — including through the kind of economic coordination that the Chinese Foreign Ministry denounced as “a design to disrupt regional cooperation and a tool to coerce regional countries” in May.

“The real question is whether China would be willing to accept the norms and the regulations so that we can have a mutually beneficial relationship in the region,” Park said in June. “So I hope that IPEF can create a better world for the future through the establishment of new regional trade and investment and also economic security framework in the region.”

Even the traditional priority of bracketing North Korea has been hampered by China. When U.S. forces began to deploy a Terminal High-Altitude Area Defense missile battery to the peninsula in 2017, China retaliated with economic punishments — a pressure campaign that resulted in an apparent agreement by Moon to restrict additional THAAD deployments and curb South Korean military cooperation with Japan and the U.S.

“The U.S.’s deployment of THAAD anti-missile system in the ROK clearly undermines China’s strategic security interest,” Wang Wenbin, the foreign ministry spokesman, said Wednesday. “During yesterday’s meeting between the two foreign ministers, the two sides once again had an in-depth exchange of views on the THAAD issue, elaborated on their respective positions, and deepened mutual understanding. Both agreed to take each other’s legitimate concerns seriously and continue to prudently handle and properly manage this issue to make sure it does not become a stumbling block to the sound and steady growth of bilateral relations.”

Wang touted the so-called three noes and a restriction that characterized the former South Korean president’s relationship with China — “no additional deployment of the THAAD system in the ROK; no participation in a US-led missile defense network; no involvement in a trilateral military alliance with the US and Japan; and restriction in the use of the THAAD system deployed” — but South Korean President Yoon Suk-yeol’s team has signaled that it won’t be bound to such a program.

“I made it clear to the Chinese side that the THAAD deployment is a matter of our security and sovereignty against North Korea’s nuclear and missile threats,” Park told reporters in China on Wednesday.