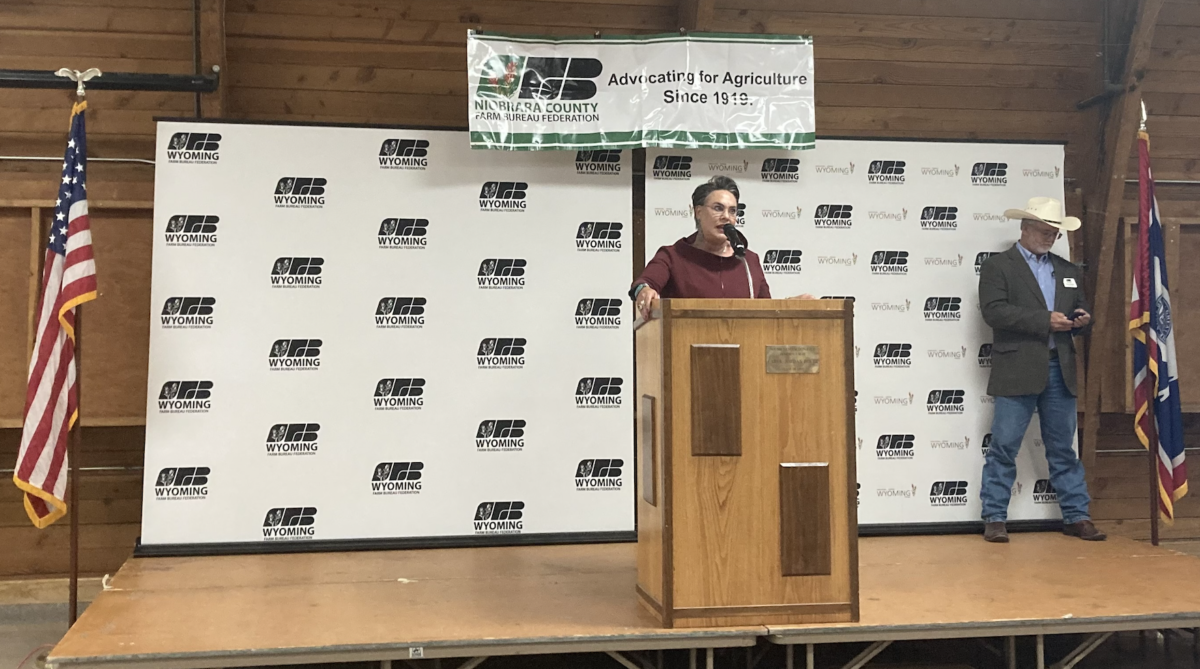 LUSK, Wyo.—Western states have been agitating for greater control of federal public lands for decades with few tangible efforts by Congress to determine how such a management model could work.

If elected as Wyoming’s lone congressional representative in November, Republican candidate Harriet Hageman will propose “a pilot program” that will allot up to 1.5 million acres of the 30-million acres now under federal control in Wyoming “to the state so we could do a better job of managing” without the weighty regulations imposed by a matrix of agencies in Washington.

She said she’d also examine land-use regulations to give states and private landowners a fairer shake in claiming mineral rights than what they now have in dealing “a Biden administration that has gone to war” with Wyoming’s mineral industry.

The minerals below Wyoming’s prairies, deserts, and forests “belong to us,” she said. “We should not have a government that is an enemy of the people” it is supposed to be working for.

More than 200 people attended the forum in the fairgrounds exhibit hall—a remarkable turnout for 2,628-square-mile county with a population of about 2,500.

Framed by Rawhide Buttes and Thunder Basin, Niobrara County is the smallest of Wyoming’s 23 counties.

The eastern Wyoming county, like much of the state, is blazing hot red. No Democrat has won in the county since FDR in 1936; it voted 85.5 percent for Trump in 2020.

Hageman, Democrat Steven Helling, and Constitution Party candidate Marissa Selvig were the only three of nine congressional candidates to show.

Notably missing was incumbent Rep. Liz Cheney (R-Wyo.) who has $15 million in campaign money but faces a 22-point gap in poll projections to Hageman. Cheney has attended NCFBF forums regularly in the past.

The Niobrara County Fairgrounds is where her father, former vice president Dick Cheney, made his first-ever campaign speech in October 1978 before winning the first of five elections in representing Wyoming for a decade in Congress.

Liz Cheney has been censored and ousted from both for being among 10 House Republicans who voted to impeach former president Donald Trump, serving as co-chair of the House committee investigating the Jan. 6 Capitol breach, and being among Trump’s most severe, unrelenting critics.

With less than a week to go before the Aug. 16 vote, Cheney has not stumped in public forums, choosing instead to campaign in small, private gatherings.

Hageman, on the other hand, has traveled nearly 40,000 miles across Wyoming, hitting every county fair, candidate forum, and meet-and-greet she can accommodate since declaring her candidacy last August.

“Haven’t seen Liz,” said NCFBF’s Kevin Baars, the forum moderator. “Anybody here from her campaign? We made sure we held this event on a Tuesday night so it didn’t interfere with the mini-series, ‘January 6.’”

Rather than “spend time introducing myself” to a crowd that included people she thinks of as “second mothers” and who she’s “wrestled calves with,” Hageman explained three reasons why she was seeking to unseat Cheney on Aug. 16.

First, Hageman said, “Wyoming has one [congressional] representative and we need to make it count” but the state has been hamstrung by an “absentee representative literally for over six years.”

Cheney has been criticized by Hageman and others for not spending much time meeting with constituents. She has been coined “the Virginian” by detractors.

The Hageman campaign has produced a mock “Liz For Virginia” campaign website.

Unlike the incumbent, Hageman said she would be “a representative who will champion Wyoming ideals.”

The second reason, she said, was her disappointment “in the COVID response and in how our leaders responded.”

Congress passed more than $5 trillion in spending in a 10-month 2020–2021 span, Hageman said, forcing many states to increase their spending in tandem to secure needed federal funding. As a result, the nation is “$30 trillion in debt,” she said.

Her third reason for running is to ensure “freedom, liberty … every right comes from God, not the government. Because they don’t come from the government, the government can’t take them away.”

Hageman said the nation is being ruled by “the most radical among us” and called the Aug. 8 FBI raid on Trump’s Mar-A-Lago resort home “a seismic shift” in perverting “what our government is and what our country stands for.”

If elected, she vowed, “I will hold the FBI, NSA, and the Biden administration responsible. I am not going to allow these people to destroy my country.

While Cheney’s campaign has not posted any campaign plans in the last week, Hageman said she’ll be touring western Wyoming with events scheduled for Rock Springs, Pinedale, and Cody.

Helling, among three Democrats running for the party’s nod on November’s congressional ballot with little chance to win in a state where 70 percent of voters are registered Republicans, described himself as “pro-Trump, pro-Life.” He has been consistently misquoted in the media as saying the 2020 election was “stolen.”

It was “probably stolen,” he clarified.

Helling complimented Hageman on her exhaustive campaigning. “She could sit in her basement like Joe Biden did and win hands-down but she’s here with us tonight,” he said. “I have to hand it to her.”

Gov. Gordon is projected to win his Aug. 16 primary and earn a second term in November. He took heat from the audience for calling COVID lockdown violators “knuckleheads” and donating to Democrat Hillary Clinton campaigns “way back then.”

Like Hageman, he vowed to “rekindle [discussion of] the disposal of federal lands,” defend the state’s legally challenged abortion laws, and to continue the fight with the Biden administration to undo the “pause” in issuing new oil and gas leases on federal land.

Asked about Bellevue, Wash.-based TerraPower’s plans to build a nuclear power plant with a Natrium reactor in Kemmerer, Gordon said the state is closely monitoring the project.

A plant in Idaho has been operating more than 40 years with a Natrium reactor without incident, he said.