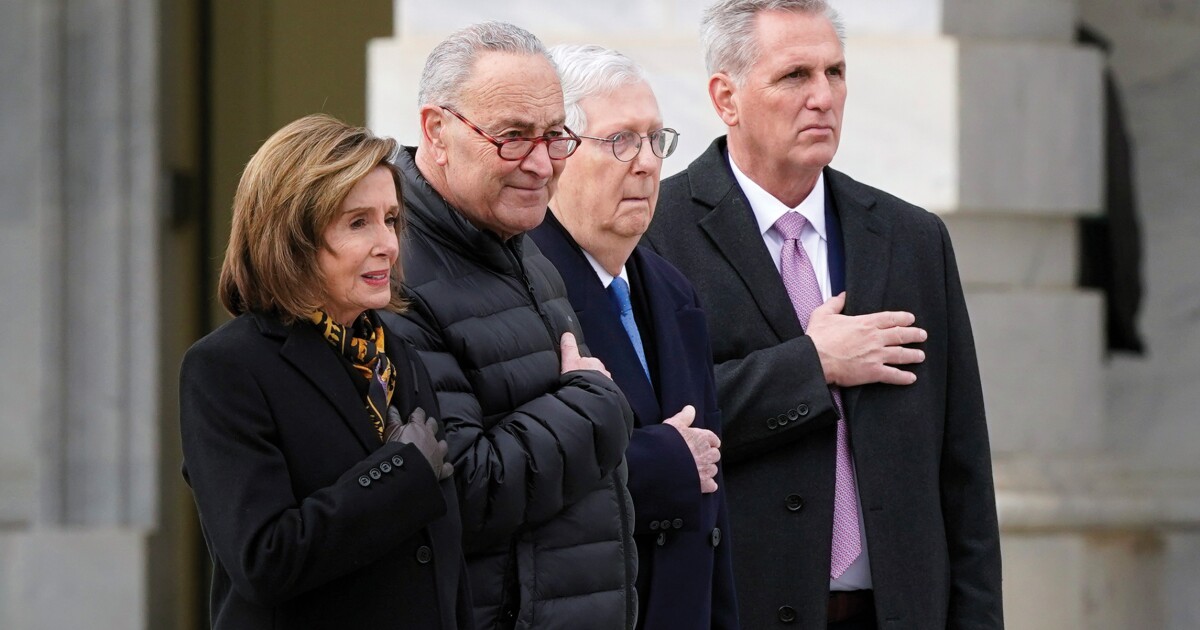 With the races for the Senate and the House both effectively being toss-ups heading into the Nov. 8 midterm elections, congressional leaders are largely focused on the inside game to scoop up campaign cash and promptly distribute it to their top candidates.

The stakes are high, with parties trying to break the current 50-50 split that favors Democrats due to Vice President Kamala Harris’s tiebreaking vote. House Republicans need to gain only six seats in the 435-member chamber to claim the majority. And with many races expected to be decided by close margins, every dollar matters to advertising and get-out-the-vote efforts.

Pelosi said recently she has been visiting, on average, five states a week during the midterm stretch run. She’s got a lot on the line: If Republicans win the House, she’s out of the speakership for the second time (along with the 2010 red wave, when the GOP won 63 seats and the majority).

So, the lawmaker from San Francisco has largely flown under the radar, featuring meetings with donors and political strategists. She recently attended a private big-ticket Democratic fundraiser alongside President Joe Biden in Los Angeles aimed at boosting the House Democrats’ war chest.

“Most congressional leaders, like Congress itself, are not very popular these days,” Northeastern University’s politics department chairman, Costas Panagopoulos, told the Washington Examiner. “It’s less likely that you might see them directly involved on the campaign trail.”

Down-ballot candidates across the country have frequently painted the big four congressional leaders as bogeymen. Sticking to the fundraising circuit carries a lower profile and thus less risk of backfiring, according to Panagopoulos.

That’s a view shared by other political experts.

“I don’t think there’s ever any wildly popular congressional leaders,” said presidential historian David Pietrusza, the author of 18 books on political history, as well as baseball, including the recently released Roosevelt Sweeps Nation: FDR’s 1936 Landslide and the Triumph of the Liberal Ideal.

Pelosi and McCarthy have to win reelection in their respective San Francisco and Bakersfield, California, districts, though both are safe seats. And Schumer is running for reelection to the Senate in New York, having first been elected there in 1998.

“These people are not spring chickens, except for McCarthy,” he said of the 57-year-old, who is in line to become the House speaker if Republicans win the majority. Pelosi is 82, McConnell is 80, and Schumer is 71.

“They only have so much energy, and jetting around the country is taxing,” Pietrusza told the Washington Examiner.

McCarthy has recently traveled to southwestern Georgia, attending a fundraiser for the GOP nominee in the Peach State’s 2nd Congressional District, Chris West, who is trying to defeat 30-year Rep. Sanford Bishop (D-GA). And McCarthy has been out campaigning with Virginia state Sen. Jen Kiggans, a Republican running against Rep. Elaine Luria (D-VA) in the suburban Hampton Roads 2nd District.

In September, McCarthy went a step further than his counterparts and rolled out the Republican “Commitment to America” agenda, hoping to counter criticisms that the GOP has been tight-lipped on their policy objectives and also seeking to energize voters. He invited mainstream House Republicans such as Rep. Dave Joyce (R-OH) and firebrands such as Rep. Marjorie Taylor Greene (R-GA) to the event in a push for party unity.

While often lacking the charisma and crowd-drawing proficiency of presidents or even stars within their own caucus, many congressional leaders have proven to be fundraising juggernauts. Last quarter, McConnell’s aligned political action committee, the Senate Leadership Fund, raised a whopping $111 million.

“It’s a different skill set than being Mr. Rock Star out there on the campaign front,” Pietrusza said. “To get those votes to get into position in the first place is very hard. And then to keep everyone on board [is difficult].”

Throughout the midterm cycle, McConnell has reportedly held calls with GOP megadonors, prodding them to open up their coffers. For example, after the primary concluded in Ohio, McConnell had asked billionaire Peter Thiel to open the spigot for Senate nominee J.D. Vance in the general election, though Thiel balked at the request, the Washington Post reported.

Over recent weeks, the political sage from Kentucky has reportedly hosted a series of fundraisers for candidates such as Herschel Walker and Dr. Mehmet Oz, whom he believes could be paramount to recapturing the lower chamber. His Senate Leadership Fund has reportedly pumped at least $34 million into the Pennsylvania race.

“Their professional networks of donors, as party leaders, are vast and intense, and they’re likely to not only have access to these individuals but [they] have strong persuasive powers in convincing them to back certain campaigns or certain candidates,” Panagopoulos said.

Through their bully pulpit, congressional leaders can elevate underdog candidates locked in hot races. For instance, the McCarthy-aligned Congressional Leadership Fund PAC, which recently announced a $73 million third-quarter haul, has poured $2 million to buoy the chances of GOP hopeful Alan Fung, who is running for Rhode Island’s 2nd District.

Fung is running in a district that Biden won by double digits in 2020, but attention from the top GOP brass in Congress has signaled to donors that he may be a viable contender. Later this month, House Minority Whip Steve Scalise (R-LA) and his deputy Rep. Drew Ferguson (R-GA) will hold a Boston fundraiser for Fung.

Congressional leaders can also shape the mood inside the Beltway. Last month, Schumer gave Democrats some heartburn when he privately claimed there was a scant “40% chance we hold the House,” as reported by Punchbowl News.

Leaders can also use their powers in Congress to force votes on legislation that puts their rivals on the spot. In May, Schumer unsuccessfully pushed for a vote on the Women’s Health Protection Act, which would essentially codify a nationwide right to abortion access. The measure failed to clear the Senate but has since served as a cudgel for Democrats locked in hot races with GOP foes.

Schumer appears to have frequented his home state in recent weeks. Earlier in the week, he went to a chip factory in Syracuse, New York, and called for the prohibition of Chinese-manufactured chips in the defense industry. The Empire State is rife with wealthy donors, making it a prime location to fundraise.

Ultimately, the outcome of the midterm elections may be out of the congressional leaders’ control. National troubles such as inflation, candidate quality, and a range of other external factors also come into play. But congressional leaders are keen on doing whatever they can to help better their party’s odds of victory.

“These guys don’t get to be the leaders by accident,” Pietrusza said. “They do it by cultivating potential members and by not wasting money on races that are unwinnable or in-the-bag ones.”