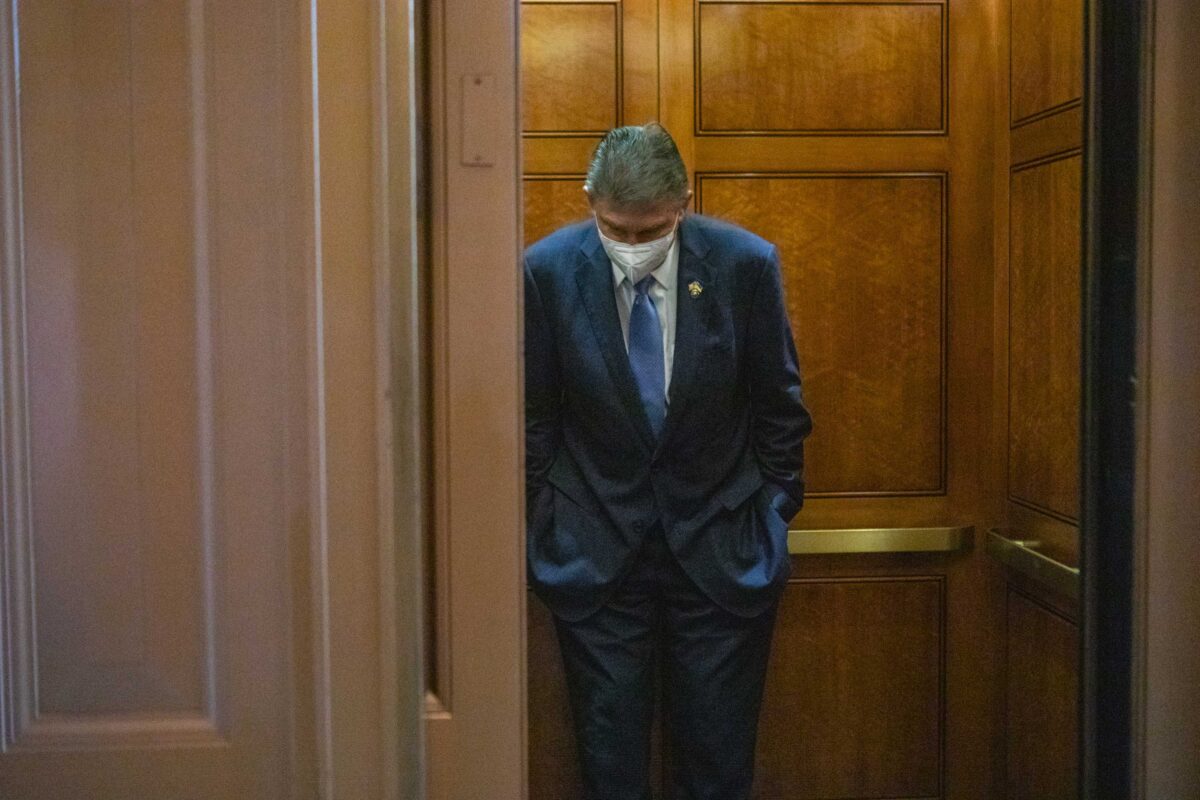 Critics of Democrats’ Inflation Reduction Act, as well as the Congressional Budget Office (CBO), are warning that the bill’s health care provisions could cause medical innovation in the United States, which leads the world in the sector, to decline sharply.

Its supporters say the legislation also will help to slow the growth of the ballooning U.S. national debt by decreasing the deficit.

Though less far reaching in tax code changes, climate policies, and health care policy changes than the $1.75 trillion Build Back Better Act that preceded it, the Inflation Reduction Act would still entail one of the largest changes to federal health policy in many years.

Democrats have been sanguine about the long-term effects of these new policies on the U.S. health care system; others, however, suggest that the bill will bring about an array of unintended consequences.

Wide-Reaching Changes to US Health Policies

Even after the Senate parliamentarian gutted several provisions in the original draft of the bill, several policy analysts have called the Inflation Reduction Act the most substantial change in U.S. health care policy since the passage of the Affordable Care Act.

Around two decades ago, Republicans in Congress successfully passed legislation barring Medicare from negotiating prices.  The Inflation Reduction Act would reverse that, and would go a step further by mandating, under threat of legal action, that drug manufacturers comply with negotiations.

Broadly, the measure would allow the secretary of Health and Human Services (HHS), beginning in 2026, to publish a list of selected high-cost drugs. The secretary would then enter into negotiations with the manufacturers of such drugs in order to try to “negotiate and, if applicable, renegotiate, maximum fair prices for such selected drugs.”

Having determined HHS’s list of selected drugs, the items would be ranked in order of the cost to the federal government, with the highest-ticket drugs receiving the highest priority in negotiations.

The selections would be subject to an array of exclusions, including exclusion of drugs whose only approved use involves treatment of uncommon diseases or conditions, drugs that cost the federal government less than $200,000,000 in the period between June 1, 2022, and May 31, 2023, and plasma-derived products.

The bill would further bar the HHS secretary from giving any preference in formulating the selected drugs list to preserving the lives of “younger, non-disabled, or not terminally ill” individuals over those who are older, disabled, or terminally ill.

Following the publication of the HHS’s selected drugs list, manufacturers would have to enter into negotiations with HHS in order to “negotiate to determine a maximum fair price” for the selected drugs, after receiving an initial offer from the HHS secretary.

The secretary is ordered by the bill to develop a “consistent methodology and process … for negotiations … that aims to achieve the lowest maximum fair price for each selected drug.”

As part of formulating the initial offer, drug manufacturers are required to hand over information on the costs of researching and developing the drug, the per-unit costs of producing and distributing the drug, any prior federal funding they have received to help research and develop the drug, and data on the company’s pending and approved patents.

Following the receipt of an offer, selected manufacturers will have no choice but to enter into negotiation. The bill dictates that within 30 days of receiving the offer from the HHS secretary, manufacturers must either accept or write back with a counteroffer, applying the same methodology developed by the HHS secretary in determining the original offer.

The secretary, in turn, would respond to such a counteroffer, and such negotiations would continue until no later than November of the year the selected drugs list is published.

Following the completion of negotiations, the secretary would be responsible for “[monitoring] compliance by a manufacturer” and “[establishing] a mechanism through which violations [of the terms of agreements] shall be reported.”

Violators would be subject to a complicated fine equating to roughly 10 times the dollar amount that manufacturers charged over the limit established by the agreement made with HHS multiplied by the number of individual units sold at the elevated price.

In brief, pharmaceuticals would be on the hook for a fine of $10 for every $1 they made in violation of the price cap negotiated with the HHS secretary.

Democrat sponsors of the bill hoped to forestall any judicial censure of the bill by declaring its health care provisions immune to judicial review within the text; however, courts may still rule that they have jurisdiction to strike down parts of the legislation as unconstitutional.

Beyond changes to Medicare price negotiation, the Inflation Reduction Act would also cap out-of-pocket expenses for Medicare Part D recipients to $2,000 per year, or roughly $150 per month. This measure, Democrats have said, will help some families to absorb the costs of the steady rise of inflation over the past year.

Drugs Plan Based on ‘Litany of False Promises’

Several observers have applauded the bill’s changes to health policy as long-overdue ones, but others are less sanguine. Critics of the new policies have warned that they will stifle innovation in the health sector by reducing pharmaceutical revenue.

In a similarly laudatory post on Twitter, Trica Neuman, senior vice president at the Kaiser Family Foundation, wrote: “It’s hard to overstate the significance of the drug provisions heading to the House.”

“It’s the first major #Medicare improvement in over a decade,” she added. “It tackles drug prices despite fierce industry opposition.”

However, critics have expressed concerns that the bill will stifle medical innovation, a sector in which the United States leads the world.

“This drug pricing plan is based on a litany of false promises,” he said. “They say they’re fighting inflation, but the Biden administration’s own data show that prescription medicines are not fueling inflation. They say this is ‘negotiation,’ but the bill gives the government unchecked authority to set the price of medicines. And they say the bill won’t harm innovation, but various experts, biotech investors, and patient advocates agree that this bill will lead to fewer new cures and treatments for patients battling cancer, Alzheimer’s, and other diseases.”

The nonpartisan group Americans for Tax Reform (ATR) shared Ubl’s criticism of the bill in a blog post, pointing to a section in the text that would authorize a 95 percent excise tax on pharmaceutical companies who refused to cooperate with the government’s efforts to cap prices.

“In reality, all drug manufacturers would accept the price controls or stop selling the drug in the U.S. market entirely rather than pay the 95 percent tax,” ATR wrote. “This provision would restrict U.S. medical innovation and limit the supply of new medicines.”

The CBO, in a 2019 letter to Democrats warning against the proposed health care changes—which have since been wrapped into the Inflation Reduction Act—said that the changes could lower pharmaceutical revenue by as much as $1 trillion over a ten-year period, thus “[lowering] spending on research and development and … [reducing] the introduction of new drugs” (pdf).

“In the longer term, CBO estimates that the reduction in manufacturers’ revenues from title I would result in lower spending on research and development and thus reduce the introduction of new drugs. CBO’s analysis of the bill is not complete; its preliminary estimate is that a reduction in revenues of $0.5 trillion to $1 trillion would lead to a reduction of approximately 8 to 15 new drugs coming to market over the next 10 years,” the CBO explained in the letter.

“The lower prices under the bill would immediately lower current and expected future revenues for drug manufacturers, change manufacturers’ incentives, and have broad effects on the drug market,” the letter said, warning about the risk of pharmaceuticals pulling out of the United States entirely. “A manufacturer that was dissatisfied with a negotiation could pull a drug out of the U.S. market entirely, though CBO expects that would be unlikely for drugs already being sold in the United States.”

The CBO has also suggested in its analysis of the bill that as much as 50 percent fewer new drugs could come to market as a collateral consequence of the bill’s health care provisions (pdf).

The proposed 95 percent excise tax, though it may produce compliance with the new rules among drug manufacturers, would raise no new revenue according to the same analysis by the CBO.

At the same time, the stated goal of the policy change—and of the bill as a whole—would only scantly be served by the Medicare changes.

The CBO estimated in its 2019 letter that the proposed changes “would reduce federal direct spending for Medicare by $345 billion over the 2023–2029 period.” This estimate comes out to per annum spending reductions of only around $57.5 billion.

Despite these and other criticisms, the Inflation Reduction Act seems to be on track for a relatively quick glide through Congress to President Joe Biden’s desk.

After a marathon session to vote on amendments, the Senate approved the bill—which uses the reconciliation process and is thus immune to filibuster—in a party-line 51–50 vote on Aug. 7, sending it to the Democrat-led House for final approval.