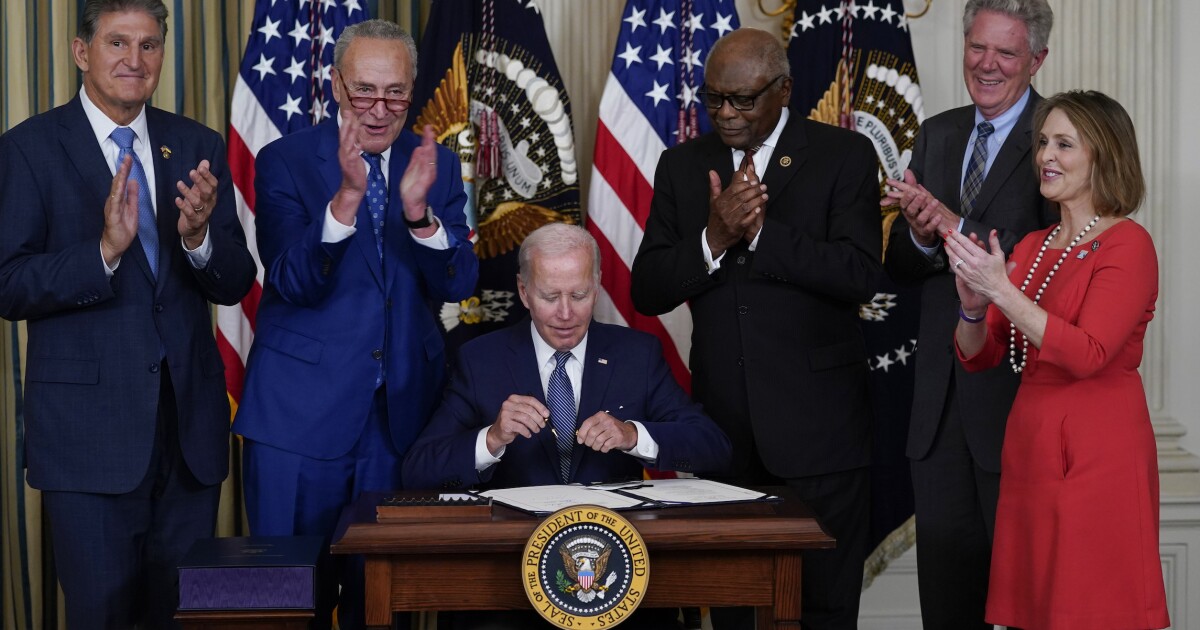 With the Inflation Reduction Act now signed into law, leaders from both major parties are predicting the bill will boost their success in the fall midterm elections.

President Joe Biden took a brief break from his vacation to hold a signing ceremony for the bill at the White House, where he praised the legislation as a major step forward for his agenda and for the country.

Some GOPers agree it’s a big step, just in the opposite direction.

“With the stroke of a pen, Joe Biden will guarantee congressional Democrats’ careers will come to an end,” Republican National Committee Chairwoman Ronna McDaniel said in a statement released after the signing. “Biden and Democrats raised taxes on hardworking Americans and gave $80 billion to the IRS to hire 87,000 new IRS agents. Americans will never forget that Biden and Democrats raised taxes during a recession.”

Both parties are now sharpening their messaging knives, ready to sell different aspects of the bill to prospective voters.

The IRA aims to reduce inflation, currently at 8.5%, mostly through a 15% minimum corporate income tax and via stricter tax collection at a beefed-up IRS. But it goes far beyond that by including allowances for Medicare to negotiate some drug prices, price caps on insulin for Medicare recipients, and the largest climate provision ever undertaken.

“We’re cutting deficits to fight inflation by having the wealthy and big corporations finally begin to pay part of their fair share,” Biden said at the signing ceremony. “Big corporations will now pay a minimum of 15% tax instead of 55 of them getting away with paying zero dollars in federal income tax on $40 billion in profit. And I’m keeping my campaign commitment: No one earning less than $400,000 a year will pay a penny more in federal taxes.”

But Republicans contend the bill will effectively do just that, with the higher corporate tax rate eating into hiring and 401(k) balances and additional IRS agents leading to more painful audits for middle-class taxpayers. Despite the name, the bill also will not reduce inflation before the midterm elections, putting Democrats in a tight spot.

“Part of the strategy is basic communications and messaging,” said former senior Obama administration official Tom Cochran. “[You] focus on what’s hurting Americans and regularly covered by the media, then demonstrate that you are working to tackle that issue head-on. That makes it easier to garner support because who isn’t for reducing inflation?”

The long-term nature of the issue will be the challenge of explaining it to voters.

“Unfortunately, addressing inflation is a multiyear effort, and while this legislation is geared towards that, it’s much broader in also focusing on climate change, deficit reduction, and prescription drug costs,” said Cochran, now a partner at 720 Strategies. “If you pass legislation that gives tax credits for energy-efficient windows or appliances, there’s a dual benefit to the American consumer and the environment.”

In that case, Republicans may “spin this in myopic ways,” Cochran argued, by saying the bill has failed to reduce inflation despite any other positives.

Based on its actions, the White House thinks the bill is a winner. Biden interrupted his vacation to stop over in Washington for Tuesday’s bill signing and plans a second celebration for the act on Sept. 6.

Over the coming month, Biden officials and surrogates will hit the road to sell the administration’s policies to voters, part of an “aggressive” messaging push detailed in a Monday memo from White House deputy chief of staff Jen O’Malley Dillon and special adviser Anita Dunn.

“Our goal for the next few weeks is simple: Take our message — one that we know resonates with key groups — and reach the American people where they are,” the memo reads.

In August alone, that outreach will see trips to 23 states by Cabinet members to tout the new bill and more.

Republicans, on the other hand, have already rolled out several counterattacks on the bill and will likely hammer those in speeches, tweets, and campaign ads until November arrives. The party will have its work cut out. After enjoying a lead in the RealClearPolitics generic congressional vote polling average, Republicans have slipped to more or less even with Democrats.