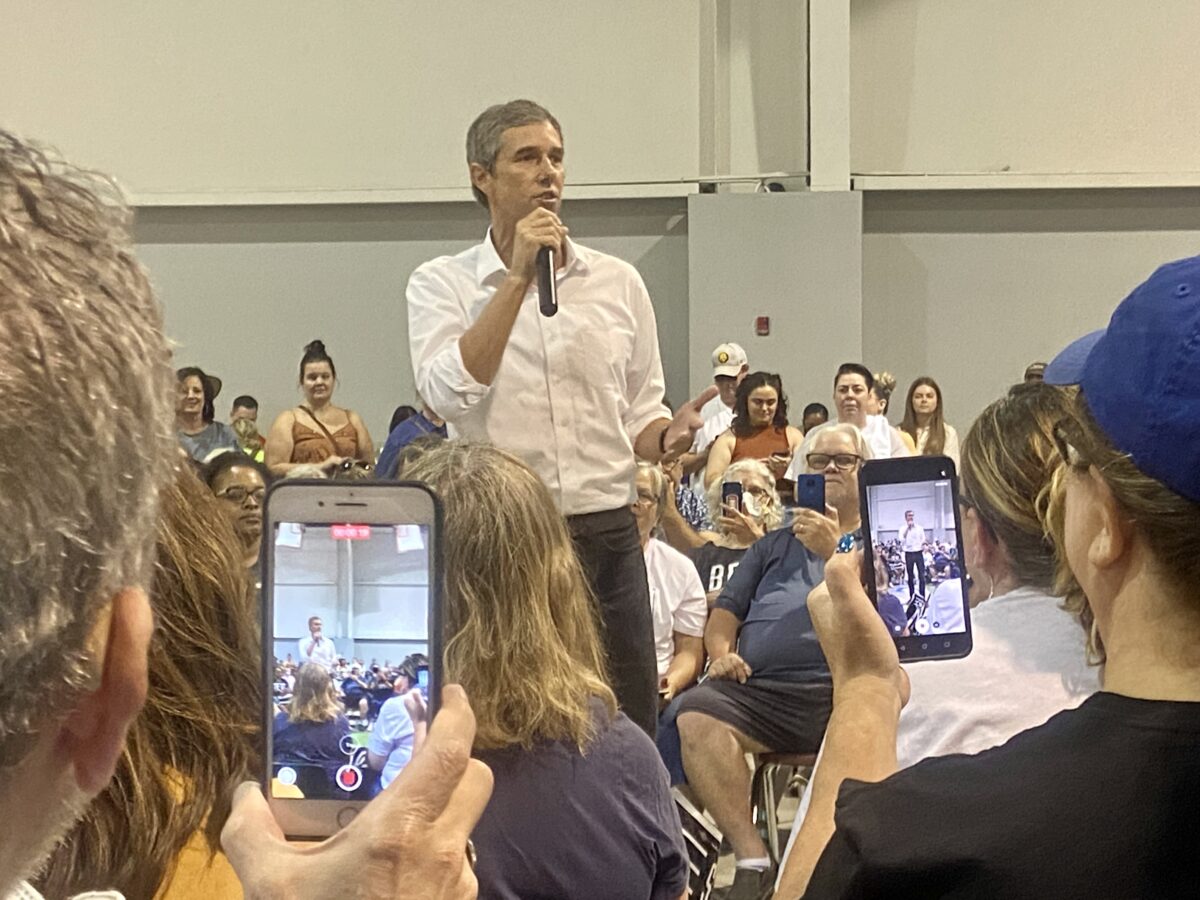 Democratic Gubernatorial Candidate Beto O’Rourke watched his language at a campaign stop in a rural East Texas town Saturday after dropping the f-bomb on a heckler earlier this week.

O’Rourke was met with a full house and a pocket of protesters at the Reecy Davis Recreation Center in Greenville, Texas. Police estimated the crowd to be about 600, with some 200 forced to wait outside.

His stop in the rural town was part of a seven-week campaign across the Lone Star State to 254 counties. He faces Republican Gov. Greg Abbott in November.

“I’m watching my swearing,” he joked at one point—a reference to an incident at a campaign stop in Mineral Wells on Aug. 10. O’Rourke used profanity when an Abbott supporter laughed as he described AR 15s as weapons of war in reference to the Uvalde, Texas, mass school shooting.

If elected, O’Rouke wants universal background checks and red flag laws, which allow authorities to take guns away from anybody considered a threat to themselves or others on the basis of an anonymous tip. He also wants to raise the legal age to buy a firearm to 21.

Ron Haight drove from the neighboring town of Terrell to hear O’Rouke. He approves of O’Rouke because he’s “for the people” and supports abortion and gay rights.

For him, recent Republican policies of busing illegal immigrants caught in the state to Washington and calling on the Texas National Guard to patrol its southern border are “extreme.”

“The Republican Party has gone off the rails,” he said.

O’Rouke has faced detractors at several campaign stops, including Greenville. A band of vocal Abbott supporters stood outside, waving flags and calling O’Rouke a “fake Mexican” and his supporters “sheep.”

“You will not be governor,” screamed a Latina Abbott supporter. “We don’t want you.”

The Hispanic woman, who didn’t wish to give her name, said other Latinos have opened their eyes and are voting Republican. Claims of white oppression and mask mandates made her fear a Socialist takeover.

The woman added that her father was an illegal immigrant, but she is against an open border that has resulted in rampant human and drug trafficking.

Under Abbott, Texas has stepped up to build a border wall, outlawed critical race theory, and pushed back on the sexualization of children and radical gender theories. Abbott has also touted his success in attracting businesses to Texas while fighting back against progressives by defunding liberal cities that defund police.

Speaking to the crowd inside, O’Rouke acknowledged the Texas border problem. He said he doesn’t condone illegal immigration, but understands it. O’Rouke claimed many of those coming to America are fleeing persecution while others want to work jobs Americans don’t want.

“The overwhelming majority of those who are seeking to come to this country right now want to be able to work jobs that very often no one in this country is willing to work,” O’Rouke said.

A mostly middle-aged crowd that included several teachers applauded when O’Rouke laid out a plan to increase teacher pay, eliminate standardized state testing, and protect status-quo school districts from school choice. On the other hand, Abbott wants to tie educational dollars to students instead of schools.

O’Rouke drew a stark contrast to Abbott on energy policy, hammering the Republican governor on the ability of Texas’s electric grid to keep up with demand—though the problems are linked to unreliable wind energy, which O’Rourke has been a strong advocate for. He wants to make Texas dependent on the national grid.

O’Rourke is betting on turning out rural Texans to win in November. Likewise, he must win over some Independents and Republicans.

Abbott, with a massive campaign war chest, is spending millions of dollars on television and digital ads. Republicans need a strong turnout in November to secure a win. The candidates recently agreed to a single televised debate on Sept. 30 in the Rio Grande Valley.