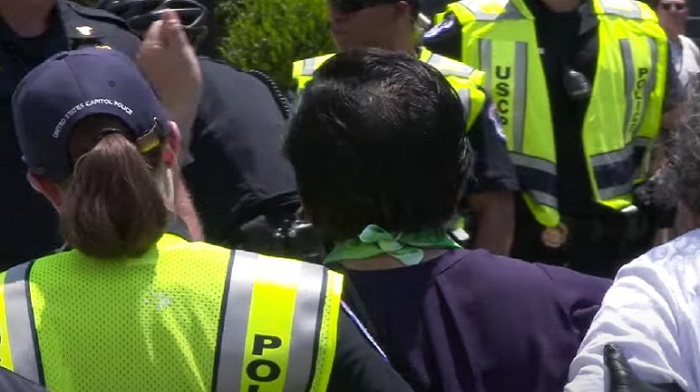 Representative Judy Chu (D-CA) was arrested Thursday during a pro-abortion protest at the Capitol. Capitol police said they arrested 181 individuals during the protest for crowding, obstructing, incommoding, or blocking a main intersection.

Video shows officers giving the crowd in attendance a “third and final warning” before taking action.

“What the Supreme Court did was devastating,” Chu says regarding the recent decision overruling Roe v. Wade.

“We have to stand up to it,” she added while sitting in the street.

Chu later posted a video of the protest and said she was “proud to join activists and community leaders today to say loud and clear – we WON’T back down.”

Proud to join activists and community leaders today to say loud and clear – we WON’T back down. We will NOT go back. #bansoffourbodieshttps://t.co/c9UOQNywFu

Having watched public hearings by the House select committee investigating the Capitol riot, my understanding is that protests leading to arrests at the Capitol are practically an end to democracy as we know it.

She was arrested at the Capitol in 2017 during a protest to demand amnesty for illegal immigrants.

Chu bragged on social media beforehand that she intended to get arrested at the Capitol, something that would likely land you in some seriously hot water if you said the same thing as a conservative today.

Once is an incident, twice is a pattern.

Following her arrest during the abortion protest Thursday, Chu called for abolishing the filibuster as a means to ram abortion legislation through Congress.

“We are in this together and we will not back down or be silenced. I am ramping up my calls to abolish the Senate filibuster,” her statement reads in part.

“Lives are at stake and this fight is far from over,” she added.

RELATED: Dr. Ben Carson Defends Clarence Thomas From Attacks By Hillary: For Liberals ‘Only Thing Worse Than Satan is a Black Conservative’

Getting Arrested is a Favorite Pastime of Democrats

If history is any indicator, this won’t be the last Democrat lawmaker to be arrested at the Capitol.

Seems like only yesterday that Representatives Sheila Jackson Lee (D-TX), Hank Johnson (D-GA), Jamaal Bowman (D-NY), and Joyce Beatty (D-OH), Chair of the Congressional Black Caucus, were all arrested at the Capitol during separate protests over “voting rights.”

I will NEVER stop fighting for Voting Rights! The time is NOW to move the voting rights bills in the US Senate forward!! Enough is enough. #GoodTrouble pic.twitter.com/XmwNrjgpuX

In the case of Beatty, the congresswoman actually led a group of protesters into a Senate office building. Some people – Liz Cheney and Adam Kinzinger for example – would call that a ‘reconnaissance tour.’

Just last weekend, the production team of “The Late Show with Stephen Colbert” was arrested and charged with unlawful entry at the Capitol, prompting Fox News host Tucker Carlson to joke that they committed ‘insurrection.’

Sorry liberals, those are the rules now.

The point being, as with the four other Democrats being detained for protesting ‘voting rights,’ you can expect more arrests like that of Judy Chu’s, especially knowing her call to end the filibuster has been rejected by Democrat senators Joe Manchin and Kyrsten Sinema.