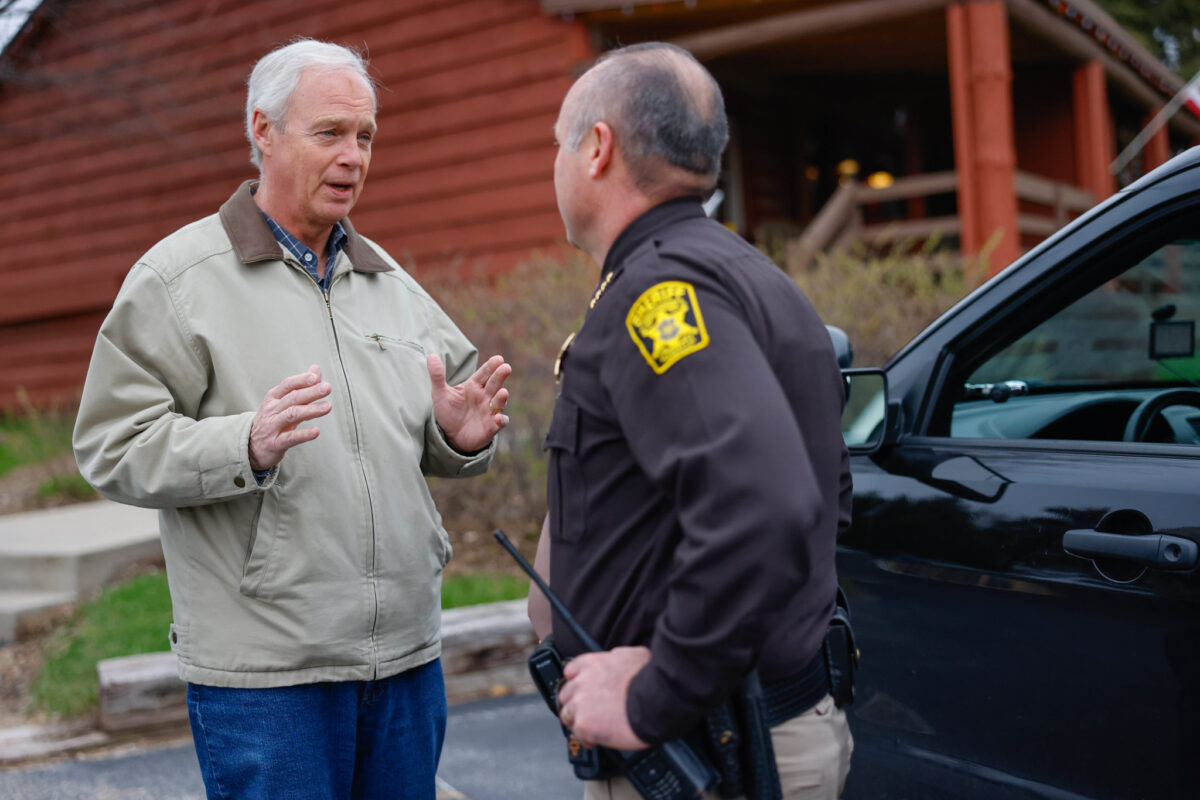 Three candidates in the Democratic primary for Wisconsin’s U.S. Senate seat toppled like a line of dominos in the last eight days before the Aug. 9 contest.

And those who fell may have removed the toughest competition facing incumbent Sen. Ron Johnson (R), an analyst told The Epoch Times.

Johnson is expected to advance past his primary challenger to the Nov. 8 general election.

The trio of Democrats who voluntarily ended their races prematurely built a wall of support behind their party’s frontrunner, Wisconsin Lt. Gov. Mandela Barnes.

Four other Democrat hopefuls remain in the primary against Barnes. But polls suggest that each has meager support among voters.

So the narrowed field practically clears the path for Barnes to advance to the Nov. 8 general election, says Republican elections analyst Joe Handrick.

But Barnes was one of “the weakest” Democrat candidates, he said, and may be easier for Johnson to beat in the fall than two of those who bowed out.

Yet, he added, some Republican candidates predicted early to do well in Senate races have appeared to be struggling. So U.S. Senate races across the country are becoming harder to predict.

Wisconsin’s could be one of “the tightest” finishes in the country, Handrick says. And that means the race could matter more than ever to both conservatives and liberals across the nation.

Headed into the Aug. 9 primary, Barnes’ website lists his priorities. They include “fighting inflation and lowering taxes” for the middle class, “reproductive justice” in the form of “abortion rights,” the legalization of marijuana use, “LGBTQIA+ rights,” helping “those who are coming to the US in search of better lives,” and “climate change” that’s “already taking a toll on our communities.”

“He’s gonna walk away with it” in the primary, Handrick said. “Nobody’s even heard of these other candidates that are left.”

If Barnes wins on Aug. 9, he likely will face Johnson, who first took office in 2011, after defeating Democrat incumbent Sen. Russ Feingold. Johnson beat Feingold again in a 2016 rematch. His six-year term expires in January 2023.

In the Republican primary, Johnson hopes voters will deliver him a victory over postal worker David Schroeder.

Schroeder has criticized Johnson for pushing back against mandates for COVID-19 vaccines and other pandemic policies of President Joe Biden, saying Johnson was “promoting false and harmful information.”

Others have praised Johnson for questioning the federal government’s response.

Johnson’s official Senate website lists his accomplishments while serving as chairman of the Senate Homeland Security & Governmental Affairs Committee from 2015 through 2021.

Before entering politics, Johnson worked as an accountant and was part of launching and operating a family business that manufactures plastic sheets for printing and packaging.

He touts private sector experience as one of the most valuable perspectives he brings to the Senate.

And he’s said he believes the “size, scope and cost of government” is the “root cause” of problems such as budget deficits, a slowed economy, and high unemployment.

If he advances to the fall election, chances of winning favor Johnson over a Democrat, predict political forecasters Inside Elections and Sabato’s Crystal Ball.

But based on the mood of Wisconsinites, state native Handrick suggests Johnson could struggle to hold on to his job.

And if Johnson loses, it could affect the balance of power in the U.S. Senate.

Currently, 48 Democrats have control of the 100-member chamber of Congress. Two Independents caucus with them, making for a 50-50 split with Republicans.

Republicans need a net gain of just one seat to claim control of the Senate. Analysts spread across the nation have been predicting they’ll pick up as many as three.

But with the balance teetering between the two major parties, every Senate race outcome matters in this midterm election cycle. Predictions of ever-tightening races have politicos on high alert.

In 2010, Johnson “got elected in the Tea Party landslide,” Handrick said. And in his 2016 reelection, Johnson outperformed the victor in the presidential race, Donald Trump, who carried Wisconsin as a Republican for the first time since 1984.

But the feelings of Wisconsinites have shifted since then.

“A lot of people are going to be voting against one of the candidates” in Wisconsin’s Senate race, Handrick said. “Ron Johnson has very high disapproval numbers. And relatively low approval numbers.

“And the Democratic candidate, Mandela Barnes, has an enormous amount of baggage, and is a relatively weak candidate, himself. And there’s gonna be $100 million put in [to campaign advertising].

“So the best way for each of these candidates to win is to tear down the other one. I just think it’s going to be a really negative campaign where people end up going to the polls and voting for what they consider the lesser of two evils.”

Johnson may be struggling to keep the hearts of his state’s voters for a few reasons, Handrick said.

Whether it’s accurate or not, some paint him as far-right-wing.

What hurts Johnson more may be his delivery.

It’s “his forthrightness and the fact that he doesn’t use nuance much,” Handrick said. “So he’s kind of hard-hitting, and that leads as much to his approval problems as the positions that he’s actually taking.”

Voters’ objection to his transparency is puzzling, he says, because “there’s really not much difference between him and some of the Republican governors, like [Florida’s] Ron DeSantis, who are pretty popular.”

Having a “plain name” also may be a psychological barrier for voters, Handrick said.

“Everybody knows a Ron Johnson. So I’m not sure people ever really get to know him very well, which has its pros and cons.

“In the last two elections, in the polling, he’s always had a relatively large number of people who say they don’t really know him very well. I’ve always attributed part of that to having such a common name.”

But in Barnes, “the Democrats are all unifying behind the person I consider to be the weakest candidate,” Handrick said.

“If the Democrats were smart, they would have nominated either State Treasurer Sarah Godlewski, or Tom Nelson,” a county executive, Handrick said. But those two never “got any traction, and they were never polling very well.”

“The only two people who had a chance of winning this were Mandela Barnes and Alex Lasry—Lasry only because he has all his daddy’s money to play with.”

Lasry is the son of an owner of the Milwaukee Bucks NBA franchise.

“Mandela Barnes and Lasry were actually the candidates that the Republicans would most easily be able to tear down. So that’s good news for Johnson—that Tom Nelson is not going to be his opponent.”

If both Barnes and Johnson move forward to the fall contest, Johnson likely will point out to voters that Barnes “doesn’t pay his taxes, and he doesn’t pay his parking tickets” on time, Handrick said.

“Those are things that just every person can relate to—getting a parking ticket and paying it, or having to pay your property taxes on time. Another thing is he went pretty far out there on abolishing the police, defunding the police, and abolishing ICE [U.S. Immigration and Customs Enforcement]—positions which I don’t think play real well in a general election.”

And what about voters who’ve cast ballots for candidates no longer in the race? Early voting opened on July 26, before two of the retreating Democrats withdrew.

Those voters can request to “spoil” their ballot—rendering it void—either through a handwritten or emailed note to a local election clerk or worker at a polling place, according to the Wisconsin Secretary of State’s Office.

The request should include the reason why a new ballot is needed. Having cast a vote for a candidate no longer in the race is an acceptable reason. For most voters, the deadline to request a new ballot is Aug. 4. But the three candidates who dropped out still will be listed as choices on Democratic primary ballots.