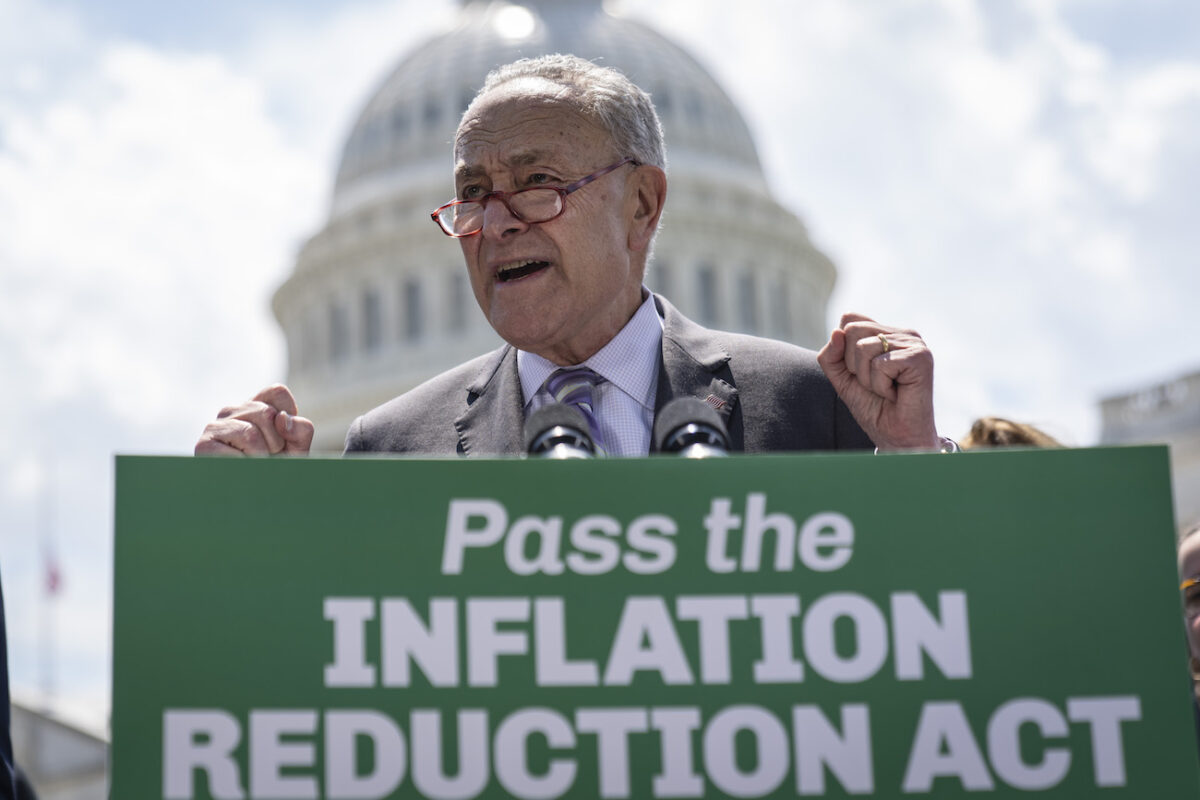 The procedural vote to advance the Democratic bill—which authorizes over $400 billion in new spending—was 51–50 after Vice President Kamala Harris arrived at the Capitol to cast a vote, breaking the deadlock in the Senate over the measure that Democrats say would reform the tax code, lower the cost of prescription drugs, invest in energy and climate change programs, all while lowering the federal deficit.

The vote means that senators will have 20 hours to debate on the measure, followed by a vote-a-rama, a marathon open-ended series of amendment votes that has no time limit. After that, the bill will head to a final vote. The measure is anticipated to pass the chamber as early as this weekend.

The House, where Democrats have a majority, could give the legislation final approval on Aug. 12, when lawmakers are scheduled to return to Washington.

The vote came after the Senate parliamentarian—the chamber’s nonpartisan rules arbiter—gave a thumbs-up to most of the Democrats’ revised 755-page bill.

But Democrats had to drop a significant part of their plan for lowering prescription drug prices, Parliamentarian Elizabeth MacDonough said. The provision would have essentially forced companies not to raise prices higher than inflation. MacDonough said Democrats violated Senate budget rules with language in the bill imposing hefty penalties on drugmakers who raise their prices beyond inflation in the private insurance market.

The White House said in a statement of administrative policy on Aug. 6 that it “strongly supports passage” of the bill.

“This legislation would lower health care, prescription drug, and energy costs, invest in energy security, and make our tax code fairer—all while fighting inflation and reducing the deficit,” the statement reads. “This historic legislation would help tackle today’s most pressing economic challenges, make our economy stronger for decades to come, and position the United States to be the world’s leader in clean energy.”

Republicans say the legislation is simply an alternate, dwindled version to the Democrat’s earlier Build Back Better bill—a multitrillion-dollar social spending package that was a major agenda of President Joe Biden—that Democrats have now dubbed the “Inflation Reduction Act of 2022.”

“There is no working family in America whose top priorities are doubling the size of the IRS and giving rich people money to buy $80,000 electric cars,” McConnell said in a separate statement on Twitter. “Americans want Washington to address inflation, crime, and the border—not another reckless liberal taxing and spending spree.”

Democrats have said the measure would “address record inflation by paying down our national debt, lowering energy costs, and lowering healthcare costs,” but Republicans have criticized the measure as having no potential other than to make matters worse, nicknaming the legislation “Build Back Broke,” in part because the bill would fulfill many parts of Biden’s Build Back Better agenda.

Economic analysts are divided on the measure, with some having predicted that the bill will worsen inflation and lead to stagnation in growth.

While Sen. Joe Manchin (D-W.Va.), a crucial swing vote for the Democrats, had blocked any chance of advancing the Build Back Better legislation, he came to an agreement with Majority Leader Chuck Schumer (D-N.Y.) on the “Inflation Reduction” bill on July 27. Sen. Kyrsten Sinema (D-Ariz.), another swing vote, on Aug. 5 announced she was also on board after further adjustments to the measure following discussions with Democratic colleagues.

Democrats are using special procedures that would let them pass a bill related to taxes, spending, and debt without having to reach the 60-vote majority that legislation often needs in the Senate. The parliamentarian decides whether parts of legislation must be dropped for violating Senate rules that would permit the special procedures, which include a requirement that provisions be chiefly aimed at affecting the federal budget, not imposing new policy.

Graham (R-S.C.), the top Republican on the Senate Budget Committee, said that in supporting the Democratic bill, Manchin and Sinema “are empowering legislation that will make the average person’s life more difficult” by forcing up energy costs with tax increases and making it harder for companies to hire workers.

While the bill’s final costs are still being determined, it includes about $370 billion on energy and climate programs over the next 10 years, and about $64 billion to extend subsidies for Affordable Care Act program for federal subsidies of health insurance for three years through 2025.

A large portion of the $700 billion—an estimated $313 billion—is expected to be generated by increasing the corporate minimum tax to 15 percent, while the remaining amounts include $288 billion in prescription drug pricing reform and $124 billion in Internal Revenue Service tax enforcement.

According to the current version of the bill, the new 15 percent minimum tax would be imposed on some corporations that earn over $1 billion annually but pay far less than the current 21 percent corporate tax. Companies buying back their own stock would be taxed 1 percent for those transactions, swapped in after Sinema refused to support higher taxes on private equity firm executives and hedge fund managers. The IRS budget would be increased to strengthen its tax collections.