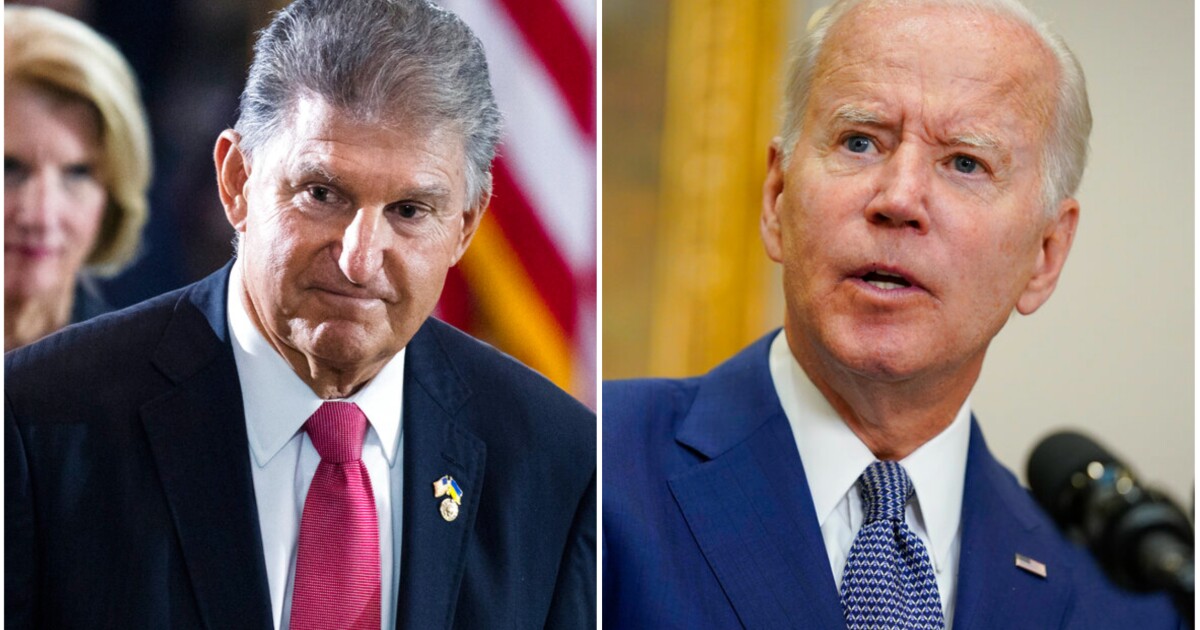 President Joe Biden may have received a big boost over 100 days out from the midterm elections, but a breakthrough in the Senate that could lead to significant portions of his agenda getting passed comes at a time of deep economic uncertainty.

“This is the action the American people have been waiting for,” Biden said in a statement released soon after the news broke. “This addresses the problems of today — high health care costs and overall inflation — as well as investments in our energy security for the future.”

While final details of the bill are not known, and it still has to pass through Congress, it seeks to allow Medicare to negotiate drug prices and extend health insurance subsidies through Obamacare, provide $369 billion for “energy security” and climate programs, and set a 15% corporate minimum tax that has long been a goal of the Biden administration, all of which could give Democrats a lot to talk about between now and Nov. 8.

“This is really a legislative masterstroke if it passes,” said Democratic strategist Brad Bannon. “It’s a really big deal and could definitely help Democrats in the midterms.”

Not only could it allow candidates to tout the bill’s achievements on the campaign trail, but GOP votes against it could be used as part of negative advertising, Bannon argues, calling out Republicans for voting against lower prescription drug prices and taxes on the rich.

It’s a stark turnaround from just one week ago.

Manchin yanked support for a similar bill last Thursday, saying he wanted to wait until July’s inflation numbers were released, though that will not happen until Aug. 10. The move left progressives apoplectic and caused Biden to threaten a unilateral national climate emergency via executive action.

The threat may have worked, though Manchin denies as much.

“Since we’ve been sitting here, Sen. Manchin has put out a statement saying that he has an agreement of some kind with Sen. Schumer,” a reporter said after learning of the deal before asking if the White House had a statement ready.

“So, I’m standing here. I haven’t seen this for myself,” Jean-Pierre responded. “I need to talk to our folks on this. So, I don’t want to get ahead of the team here.”

Biden’s statement praising the bill was released that evening. Manchin later told a reporter from WV MetroNews that the president was not involved and that “it could have absolutely gone sideways” if he was.

While Biden has frequently been on the losing end of Manchin declarations during his time in the White House, this time, it appears that Senate Minority Leader Mitch McConnell (R-KY) got the short end of the stick. The bill was announced just hours after the Senate passed a bipartisan CHIPS Act on Wednesday, which McConnell previously threatened to tank if Democrats pursued a reconciliation bill.

Even so, the impact of the new bill is debatable in a midterm cycle that strongly favors Republicans amid signs a recession could be near, if not already here.

“Is there anything in this bill that will realistically move polling that shows 80% of Americans think the country is moving in the wrong direction to a mere 50%? That’s not likely, especially after today’s economic news,” said Republican strategist Doug Heye. “This is not what voters are focused on in their daily lives. It’s ‘How much am I paying for everything?'”

Respondents to a recent Monmouth University poll identified inflation (33%) and gas prices (15%) as the biggest concerns facing their families right now. A majority of 57% said the actions of the federal government over the past six months have hurt their family when it comes to their most important concern. Biden’s own approval ratings are stuck in the low 30s, which could drag Demorats down this fall.

To that end, the parties will debate whether or not the bill, despite being named the Inflation Reduction Act, will actually reduce inflation. Democrats are likely to point to the act’s title and higher taxes on corporations, while Republicans will emphasize new government spending and the potential for higher corporate taxes to translate to higher prices.

Biden is betting the deal is a winner for his party, calling on Congress to pass it even before the final details are announced.

“I want to thank Sen. Schumer and Sen. Manchin for the extraordinary effort that it took to reach this result,” his statement concludes. “If enacted, this legislation will be historic, and I urge the Senate to move on this bill as soon as possible, and for the House to follow as well.”