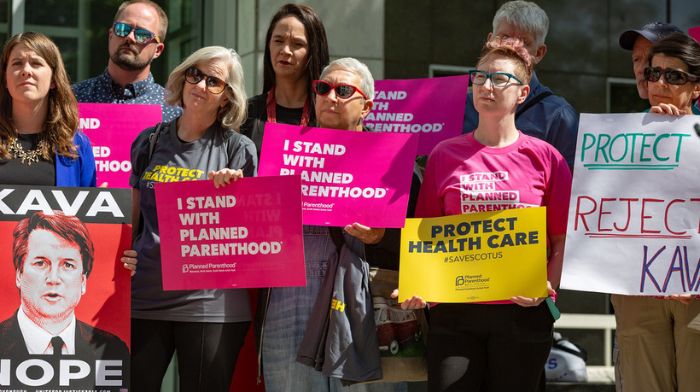 Even if Donald Trump never runs for president ever again, the mark he left on the Supreme Court will be in place making the left crazy for a long time.

While liberals are still in mourning over the overturning of Roe v. Wade, that decision has given them a vehicle to keep themselves ginned up, telling their fellow lefties that the Court’s “attack” on abortion is just the beginning.

A recent piece at Politico hints that the conservative court could take aim at affirmative action next, which is presented as a bad thing.

The continuing liberal meltdown over the U.S. Supreme Court decisions in Dobbs and Bruen is going to sustain me for weeks.

As the left’s new villain and noted “black white supremacist” Justice Clarence Thomas and his wife Ginny head out on the road in their RV at the close of the current Court session, Politico laments the Supreme Court cases that have just not gone their way this session.

The Court upheld such nightmarish issues as Americans protecting themselves with a lawfully purchased firearm. They rejected religious discrimination for school funding, and in the same vein, ruled that public school employees like football coaches in fact do have the right to pray after a football game.

Arguably one of the worst, because we wouldn’t want the idea that you can pray to get around. They also ruled that people in two states can draw lines for congressional districts that don’t just benefit one group of people, but all the people who live in that district. Isn’t the left all about “equity?” Clearly, certain criteria apply.

Rick Hasen is a Law Professor at the University of California at Irvine. He did not sugar coat it for the left.

“What the court did just on abortion, guns and congressional power in the last eight days—that alone is momentous [but] if these justices stay together over the next few years, I don’t even think the first shoe has dropped. There’s so much more the Supreme Court could do to change American society.”

With statements like that, here’s to hoping the Justices vote to go on one of those corporate retreats where you go to the woods and do exercises like having to close your eyes and fall backwards and trust that your colleagues will catch you. You know, so they can bond.

Dear #SupremeCourt: I know you’re excited, but please spread out your amazing decisions so we can really let the Liberal tears flow for a while. We didn’t even get a full meltdown over guns when you hit them with #RoeVWade.

RELATED: Trump Leaves The Door Open To Run With DeSantis As His VP

A Preview Of Cases To Come

One of the things conservatives have to love, at least about the end of this Supreme Court session, is the rapidity with which the rulings came down. The left barely had time to hang up their Handmaid’s Tale gowns and grab their “no nukes” signs, when the Court ruled that the Environmental Protection Agency did not have unending authority to regulate greenhouse gas emissions from power plants. So much for the Green New Deal.

The next Supreme Court session doesn’t look like it will be any easier for the left. The Court has agreed to hear a case from North Carolina that could give state legislatures more say in federal elections by limiting the ability of state courts to review their actions.

In addition, the Court has agreed to hear two cases involving racial affirmative action at colleges and universities, and the case of a Colorado web designer citing her religious beliefs in not wanting to design a wedding website for a same-sex couple.

Liberals can’t make up their minds: When the Supreme Court rules the way they want, they celebrate. When it doesn’t, the Court is illegitimate and should be abolished.

Give Us Our Way Or Else!

As is predictable, when the left does not get their way, those that did not give in to them become racist, sexist, bigoted homophobes. Oh and throw in “fascists” too. They then proceed to demand change or just plain destroy the source of said racism, sexism, bigotry and homophobia.

Rep. Maxine Waters (D-CA), not one to miss a good on-camera temper tantrum, also joined in saying, “Women are going to control their bodies, no matter how they try and stop us. The hell with the Supreme Court. We will defy them.”

Mike Davis is a former nominations counsel to Sen. Chuck Grassley (R-IA). He called it exactly what it is.

“The Supreme Court is not supposed to be democratically representative by design. They’re supposed to protect minority rights and us from government, whether it’s tyranny or anarchy….The Democrats, the left, are trying to delegitimize the Supreme Court because they lost control of it.”

So we should probably get used to leftists meltdowns. Because really, we haven’t seen them this mad since…yesterday.

Another Supreme Court WIN for conservatives on the bullshit climate change front. Sorry liberals! This just hasn’t been your month.