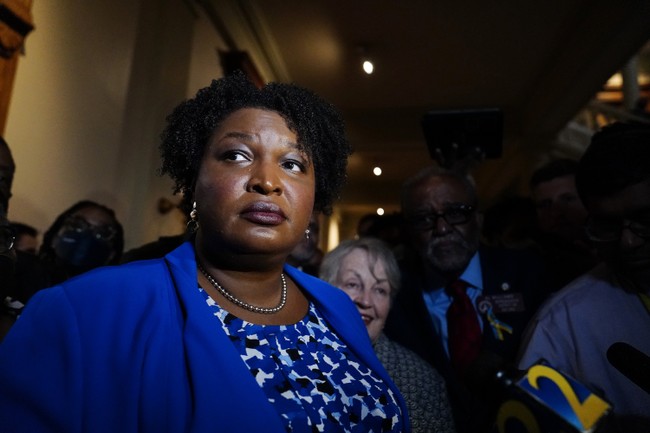 It’s no secret at this point that Democrats have drifted, then ran away, from their once-stated abortion stance that ending the life of an unborn child ought to be “safe, legal, and rare.” Instead, Democrats today tell women — nay, “birthing persons” — to “shout your abortion” and encourage “abortion parties” to reinforce what they apparently see as a death worth celebrating.

The fact that Democrats want to celebrate abortion while simultaneously arguing that abortion is necessary for women to be able to live the lives they want is a contradiction in itself. If abortion is so great and to be celebrated, why is it also seen as a necessary evil for women to have what is touted as “equity”? It, like most of their positions, doesn’t make sense.

But now, due to President Joe Biden giving his party literally nothing on which to run, abortion has become the main focus of Democrats campaigning to stem the GOP’s red wave that continues to build.

There’s no economic success to tout, safer neighborhoods are few and far between, drug cartels peddling deadly fentanyl and human traffickers — along with an increasing number of people on terror watch lists — are taking advantage of Biden’s open border. The only thing Democrats have to campaign on is not even really something they’re for, but something they are against — the Dobbs ruling by the Supreme Court.

And, evidently, as a result of it being the only thing on which Democrats have to run, Biden and his party are going even further in their abortion extremism, promising policies that are far outside of what a majority of Americans consider acceptable and peddling ideas that tip over the border into dystopian evil.

For the White House’s part, President Biden has been trying to make abortion the defining distinction for his party in the midterms. He pledged — after previously saying he was focused primarily on inflation — that his number one priority for the new Congress, if Democrats retain and expand their majorities, would be to “codify Roe.”

But if that “codify Roe” mirrors what Democrats in Congress put forward under the same veneer earlier this year — and there’s no reason to believe it won’t — it’s far beyond what Roe accomplished with its fundamentally flawed reasoning that was rightfully struck down this summer.

As Guy explained in a post amid the post-leak Dobbs uproar, “a bill that actually enshrined the existing Roe/Casey precedent would look something like broadly legalized abortion until roughly the second trimester or mid-pregnancy, after which most abortions would be illegal.” But that’s not what Democrats have pushed for, nor is what they are promising in a last-ditch effort to not get completely shellacked in November.

What Democrats have pledged to do if they remain in power is more like this, as Guy’s piece summarizes from a review by John McCormack: a nationwide right to abortion for all nine months of pregnancy, strike down nearly every state law on abortion — even parental notification laws backed by some 70 percent of Americans — shred protections for conscientious or religious objectors, invent a right for non-doctors to carry out abortions, prohibit state laws that ban sex-selective abortions, remove state-passed 24-hour waiting period laws — supported by a 41-point margin — abolish state laws requiring abortion alternatives to be presented — backed by Americans to a 77-point spread — and potentially force states to pay for Medicaid recipients’ abortions. That’s what the so-called “Women’s Health Protection Act” would have been done if passed earlier this year, and that’s what they called “codifying Roe.”

That plan is as extreme as they come — and entirely more extreme than what Americans believe abortion law should allow or restrict. And Democrats’ abortion extremism is, for seemingly obvious and ghoulish reasons, not working.

Polling from mid-October found Americans planning to vote in the midterms putting “abortion rights” at number 12 on their list of “top issues.” The more important issues preceding abortion, from most pressing, are inflation, the economy, election integrity, high gas prices, violent crime, the Ukraine war, fentanyl poisoning, energy policy, national security, school issues, and election cheating. That is, Biden and the Democrats’ main campaign priority isn’t even in the top ten concerns for midterm voters.

To fully understand how extreme Biden’s party has gotten on abortion in their pre-midterm desperation, their go-for-broke attitude on abortion was perhaps most clearly seen in Georgia sore loser Stacey Abrams. The Democratic nominee for governor in the Peach State decided to try and bridge the gap between her party’s priority — abortion — with an issue that’s actually top-of-mind for voters — the economy. But that meant Abrams argued on “Morning Joe” that abortion is a solution to inflation.

“Abortion is an economic issue,” Abrams said on the MSNBC morning show when asked how she would lower costs for Georgians if elected governor. “Let’s be clear — Having children is why you’re worried about your price for gas, it’s why you’re concerned about how much food costs,” she claimed. “You can’t divorce being forced to carry an unwanted pregnancy from the economic realities of having a child,” the Democrat argued. “We don’t have the luxury of reducing it, or separating them out.”

Put more simply, killing your unborn children is a great way for Americans to lower their expenses and save money as costs rise to 40-year highs.

Abrams isn’t alone in her dystopian view of children as an economic burden that would be better off killed to allow his or her parent(s) to better cope with the results of her party’s disastrous economic policies. Earlier this spring, Democratic U.S. Rep. Katie Porter of California made a similarly macabre claim.

“The fact that things like inflation can happen, and it becomes more expensive to feed your kids and to fuel your car is exactly why people need to be in charge of how many mouths they’re going to have to feed,” Porter explained to Lawrence O’Donnell on MSNBC. “The fact that we’re seeing this jump in expenses, that we’re seeing people having to pay more in the grocery store, pay more at the pump, pay more for housing, is a reason that people are saying, ‘I need to be able to make my own decisions about when and if to start a family,'” she claimed.

So, because Democrats have ruined our economy, driven the country off an energy crisis cliff to be “green,” and failed to do anything but spend and tax more heavily, they want you to kill your unborn children. If there’s a more disturbing policy “fix” to inflation, it escapes this writer.

Would Democrats saying abortion is necessary to cope with inflation also support mandatory assisted suicide for aging Americans whose younger family members can’t afford to care for them? What about surplus children who are already born but are really eating into the family’s grocery budget? The apparent evil inherent in their positions is sickening. But these are the positions their party, up and down the ballot, have staked out and committed to in the final days of the 2022 midterms.