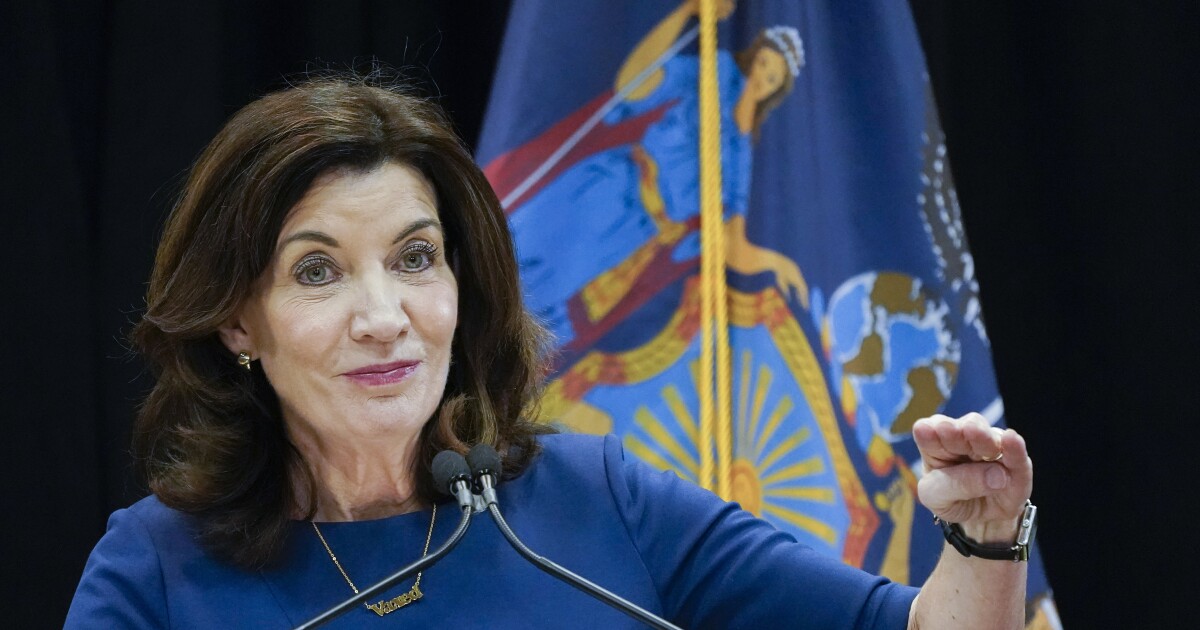 Some Democratic candidates in tight races have pivoted to a tougher message on crime in the final weeks before the midterm elections.

But their efforts to rebut the waves of Republican criticism hitting them across the country could come too late, and reflect too small a view within the Democratic Party, to sway voters who consider public safety their top concern.

GOP candidates up and down the ballot have focused their campaigns heavily on the national rise in crime that, they’ve argued in numerous races, Democrats allowed to proliferate by supporting liberal criminal justice reform.

That’s forced some Democrats to play up their relationship with law enforcement and their commitment to getting crime under control.

Hochul also appeared alongside New York City Mayor Eric Adams (D) last week to tout the addition of more police officers to subway stations as part of the city’s efforts to crack down on crime beneath the streets.

Her increased effort to appear tough on crime came after her Republican opponent, Rep. Lee Zeldin, has spent months consistently hammering the way she’s handled crime in the state, leading to a tightening in the polls that has made Democrats sweat.

“Why do you want to be bringing up that fear and then turning around and saying, ‘Elect me as a continuation of the times that produced that’?” Reeher told the Washington Examiner. “I just think that might backfire a little bit on her.”

By cutting an ad like the one her campaign put out last week, “you can raise the very issue that people associate more favorably with the other party,” Reeher added. “You’re raising the recognition of the issue that works against you.”

Voters trust Republicans significantly more than Democrats to tackle crime, an issue that has played a particularly important role in states that are home to high-crime cities.

An Ipsos poll published this week found Republicans had a 15-percentage-point advantage over Democrats on the issue of crime.

Democrats have tried a number of strategies to neutralize their credibility gap on the problem.

Some have worked to conflate Republicans’ perceived leniency toward Jan. 6 rioters with an overall soft-on-crime attitude.

Mandela Barnes, the Democratic Senate candidate in Wisconsin, has argued that Republican Sen. Ron Johnson, his opponent, can’t be trusted to restore law and order because Johnson associated too closely with the forces behind the riot.

Others have tried to tout their gun control efforts as evidence of their recognition of the crime problem. It’s a tactic Hochul has repeatedly deployed, as has Oregon gubernatorial candidate Tina Kotek, who has trailed in the polls in large part because the state’s voters are uneasy about rising crime.

And still other Democrats have tried to bridge the gap by distinguishing themselves from their party’s most unpopular criminal justice positions.

In Pennsylvania, for example, Democrat Josh Shapiro has spoken out more forcefully on crime than many other Democrats.

The state’s current attorney general and the breakaway front-runner in its gubernatorial race, Shapiro told the Washington Post this week that leaders “have to acknowledge the truth” about the way people perceive crime in order to fix the problem.

“It’s hard for politicians to depreciate the importance of an issue that is felt firsthand by voters,” Charles Lipson, political science professor emeritus at the University of Chicago, told the Washington Examiner. “So you can’t say that there’s not really a problem with gas prices. People know there’s a problem because they fill up their car. You can’t say don’t worry about crime when people know that it’s dangerous to ride the subway.”

Democrats spent much of the midterm election cycle attempting to shape the national conversation around abortion, an issue on which voters tend to favor them over Republicans.

But tightening polls in virtually every race of significance suggest previously undecided voters are basing their decisions on the more fundamental issues of the economy and crime.

“Their best shot originally was to try to say other issues are a lot more important [than crime],” Lipson said of Democrats.

“The fact that they’re now talking about it means that that strategy failed, so they’re going to their backup strategy, which is ‘Believe me — I’m on your side on this,’” he added. “The problem is, the national party has adopted a different view for several years and made it very prominent, and it was not a contested issue within the party. There were no prominent people who did what Bill Clinton did with Sister Souljah.”

Lipson was referring to Clinton’s repudiation of racially charged language the music artist Sister Souljah used during the 1992 campaign. The episode has become synonymous with the concept of a politician rejecting an extremist view associated with their party.

With early voting already underway in many states and the share of remaining undecided voters shrinking rapidly, any pivots made by Democrats could come too late to rescue them.

Republican political groups have moved to expand their spending deep into Democratic strongholds during the final two weeks of the race, reflecting an optimism among Republicans that Democrats miscalculated their messaging in ways that will cost them seats.