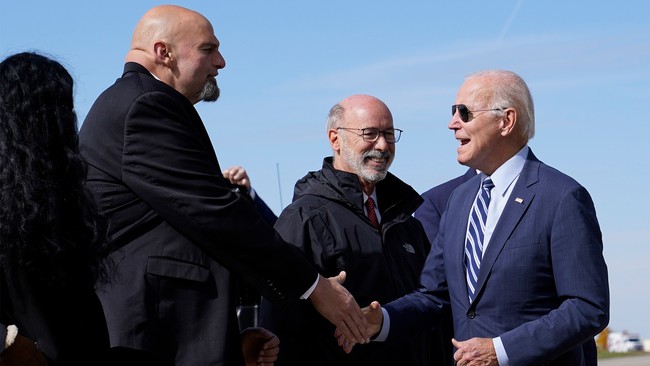 I’ve been witness to every election cycle since Nixon. I’ve never witnessed a more bizarre and obviously doomed strategy to be used as a closer in the national dialogue than we are seeing Democrats use at present.

It goes like this. No matter the topic, tell the people that what they see is dishonest, shame them for seeing it, then tell them what you’d like them to see instead.

Honestly the campaign has become void of any discussion of any real issue, problem or solutions.

If it doesn’t work, shame them more. Shame them in stronger terms. Condemn them as someone who is untrustworthy. Put such a smear on their personhood that they desire to recoil and change their mind.

It started with the Biden speech in front of Independence Hall. The *President took considerable liberties while  branding half the population as “extremists.” And for a considerable number of minutes after that he added “pieces of evidence” that supported his premise.

The Philadelphia District Attorney just this week attempted to state publicly that if voters discussed his “diverse” city’s severe violent crime problem, then they could be relegated as racists who are participating in “a true southern strategy.” (A fictitious strategy supposedly utilized by Democrat Bill Clinton to win his first presidential campaign.)

In New York City, Eric Adams—the mayor—is seen mounted on a unicorn, telling all who will listen, that violent crime in his city is just a “perception” but not reality. The implication is easy to draw once again that if you see it, recognize it, and especially speak out against it then the “problem” is you (the person worried about it.)

On the economy this has been the case ever since Independence Hall. As Biden has toured a whopping total of 15 House districts he is asked almost daily about inflation. He claims it doesn’t exist. He’s confronted by voters over out-of-control gas prices. He claims California has always paid $7 per gallon. He then gives a speech claiming the average price for gas in 41 states plus Washington DC is under $2.99.

When last checked, the Gas Buddy app records no state (zero) have a price under $3.00.

Katie Hobbs has repeatedly claimed that as Governor in Arizona she would be a puppet for the administration. And should the federal government choose to see no problem at the border currently, “why should she?” Kari Lake (R) is pledging to close and secure the section of the border Arizona shares with Mexico. But then again Lake has been on a listening tour, hearing directly from Arizonans, and the fears they face with an out of control process.

Shame on the person who asked Hobbes about it. Shame on anyone thinking for themselves.

In the race for a State Senate seat in New York’s 11th State Senate district, Stefano Forte (R) is more or less running against a ghost incumbent in Toby Ann Stravisky. Stravisky refuses to debate and claims that the crime problem in New York  does not exist.

New York Governor Kathy Hochul continues to be a crime denier, and has focused her almost entire campaign against Lee Zeldin (R) criticizing him for his support of the Dobbs verdict. Zeldin meanwhile has leveled evidence after evidence in advertisements from honest every people’s surveillance cameras that demonstrate how boldly evil spears are pulling guns on anyone and everyone.  Zeldin took his first lead in the local polling on Friday, and he’s winning over Independents by +9%. Having long solidified the Republican and Conservative Party’s support look for his margin with Independents to be roughly the margin on the race on election night.

In New Jersey’s 5th Congressional. Josh Gottheimer has refused to debate Frank Pallotta for the important NYC suburban district in North Jersey. But he also claims “no crime issue” and the economy is “recovering nicely.” And if you can even find him, try asking his plans for inflation and American energy production. He literally has no answers.

In race after race, in state after state, from The President (“our economy’s strong as hell”) to the races for State Assemblies, State Senates, and gubernatorial seats, democrats have placed a bet.

The wager that they can convince you that the issues you most care about aren’t real, and that you are racist if you even mention them.

Deny reality, shame the voter, and brainwash people to their belief system.

It’s the strangest, most dishonest, way I ever witnessed for the closing stretch of a hotly contested and deeply engaged mid-term.

I doubt it will work.