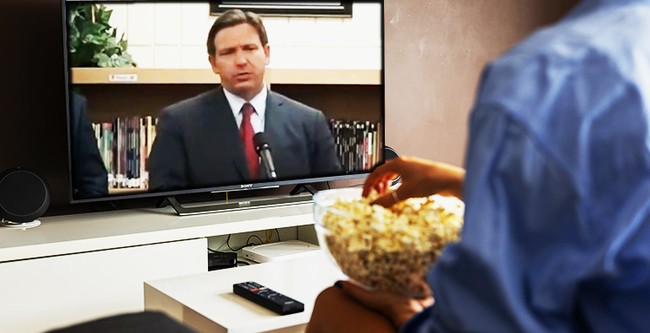 The Financial Times delivered an epically long cover profile on Ron DeSantis, and they managed to dredge up some scathing details which should invalidate him for any further offices. It turns out that when he was at Yale, DeSantis would conduct a screening of sorts while speaking with a prospective date.

– “According to a friend, (he) would tell dates he liked Thai food, but pronounced it ‘thigh.’ If they corrected him, Finch wrote, he would find an excuse to leave. ‘He didn’t want a girlfriend who corrected him.'”

Learned a lot from this Ron DeSantis profile in the @FT. I think “Trump with Brains” actually sums it up nicely, if only because it’s confusing and who knows what to make of the guy. https://t.co/RRhf2DreUC pic.twitter.com/hYYg0bCgth

The ongoing saga of Elon Musk and his prospective takeover of Twitter continues. The latest wrinkle now sees the Biden administration looking into the validity of his purchase of the company; not over anti-trust issues, just that there is the worry that a liberal-leaning social media company might be positioned in a more upright manner.

Along with this thinking is ABC News with the announcement that Musk’s takeover could lead to significant layoffs at the company. What concerns the network is that this could impact the ability to limit the expression of users, as Musk has indicated his commitment to the principle of free speech – a grave concern. Then ABC turned to an expert who lent this expert opinion on the matter, which strikes as being somewhat less than that of an expert.

There could be encouraging news on the environmental front, but then that would be bad news for the climate hysterics who want to control our lives, so it has to be mitigated with some attached dire content. But…even the supplied data is screwed up. We are given the uplifting notion that CO2 emissions appear on the decline. Until we are served the details stating the opposite is in effect.

– “The Paris-based IEA estimated that global CO2 emissions are on pace to reach 33.8 billion tons this year, an increase of nearly 300 million tons should forecasts prove accurate.”

What is happening is that – much like when a federal budget proposal is to have a lower amount of spending growth and have that declared to be a “cut in spending” – while the 300 million tons is an annual increase, it is a lower increase than seen last year, so it is…a decrease in the growth of emissions. The other flaw is that this is measured against the 2021 CO2 measurement, which grew by 2 billion tons. That is because during the global pandemic shutdown there was far less travel, automobile use, and other decreased output factors, so 2021 was a growth back to normal levels.

Basically, like most environmental reporting, this is a complete mess.

In a surprise, global greenhouse gas emissions seem to be on the decline – UPI.com

As we hit the homestretch to the midterm elections, the AP’s Chief White House reporter Zeke Miller does his best to show us the side of President Jose Biden that would propel him to the stratosphere of approval numbers. It just takes you self-centered voters to take time away from fretting over your grocery bill and rent payment while pumping gas and come to realize that Biden is super swell with people and is a totally super guy that everyone is supposed to love. You really should be ashamed of yourselves.

– “If President Joe Biden could greet every American this way, longtime allies say, his approval ratings would soar.  It’s the end of his speech that often marks the beginning of Biden’s favorite part of an event — the rope line, in the parlance of political operatives. He whirls around, scans the crowd and zeroes in on his first target for a one-on-one connection. Aides say the 79-year-old has perfected his selfie arm, the products of which are widely shared on social media.”

One handshake, one hug and one selfie at a time, President Joe Biden is on a mission to connect with everyday Americans. https://t.co/cX7pvaCNcG

Even when there might be good news on the environmental front (who can tell with that prior entry), we need to maintain the anxiety – and the guilt. So, whenever anything even approaching good news or a solution might be on the horizon, we have to find a way to extend and broaden the threats to our existence.

Now the newest scourge to impact the planet negatively has been spotted, and it might be among the worst yet – your pets are killing the planet!

Pets’ meat-heavy diet is the biggest climate offender, but there are things you can do to reduce their impact. https://t.co/DejiQKrGIK

But of course, they are. Now, since I am not one on the hysteric earth-doom bandwagon, I have to speak as an outsider. But it strikes me as a dicey proposition when you obviously want to appeal to those who love the planet and animals to blame their own animals for the promised calamity ahead.

We recently covered the case of KOB-New Mexico reporter Ryan Laughlin performing a fact-check on a GOP campaign ad running against incumbent Governor Lujan Grisham. The ad stated she released a prisoner during the pandemic over safety concerns, and he went on to kill an ex-girlfriend days later. Laughlin jumped in to debunk the ad as incorrect – because Grisham had him released for other reasons. Because that makes things completely acceptable.

In the wake of his report, Democratic activist lawyer Marc Elias dispatched some of his minions to appeal to the station to block the commercial from running any more times as a result of their “proof” it was filled with misinformation. The station looked into the matter and decided – despite their own reporter’s segment – there was no reason to block the ad.

New Mexico Reporter Mocked for Protecting Governor Lujan Grisham Is Fact-Checked by His Own Station https://t.co/aIYC3tKuN6

Reporting on the Mirror – NEWSMAX

After a recent appearance on Newsmax, former “60 Minutes” contributor Lara Logan has been said to be no longer welcome on the network. In a discussion about human trafficking, she mentioned how the U.N. wants to flood our nation with 100 million refugees and have us all eating cockroaches while they dine on the blood of children. It was similar indelicate language that led to her making an exit from Fox News not too long ago.

Newsmax cuts ties with Lara Logan after she said world leaders ‘dine on the blood of children’ https://t.co/q06rpuh5z3 pic.twitter.com/KNtEViPWND