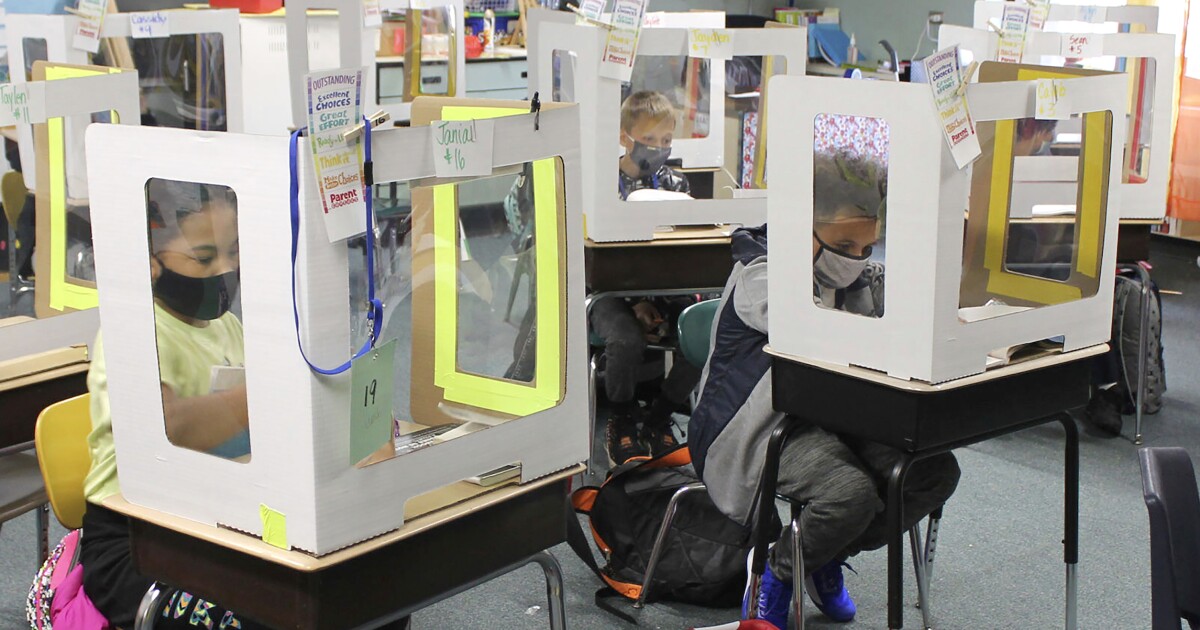 The White House is attempting to distance itself and the Democratic Party from pandemic-related school closures now that mounting data show closed classrooms severely damaged students.

Student test scores saw precipitous declines in math and reading over the past two years, according to new data from the National Assessment of Educational Progress, commonly known as the Nation’s Report Card.

Democratic-led states and teachers unions largely pushed school closures as a safety measure in 2020 and 2021, but both groups are now distancing themselves from those stances, as is the Biden administration.

White House press secretary Karine Jean-Pierre claimed on Monday that the administration “always knew that getting schools open would not be enough” and sought to shift the blame back on Republicans for voting against the president’s pandemic spending proposals, namely the $1.9 trillion American Rescue Plan that passed Congress with no GOP support in March 2021.

Education Secretary Miguel Cardona released a statement pointing to the virus itself as responsible without mentioning past policy decisions.

“This once-in-a-generation virus upended our country in so many ways — and our students cannot be the ones who sacrifice most now or in the long run,” he said in a prepared statement. “We must treat the task of catching our children up in reading and math with the urgency this moment demands.”

Cardona also promised a new round of funds from the American Rescue Plan, much of which remains unspent more than 18 months after the bill passed, to address learning loss.

But Republicans have been out front pointing to Democrats, President Joe Biden, and union leaders as to blame, promising to do better if they take control of Congress following the midterm elections.

“Parents are the primary stakeholders in their child’s education — not the failed teachers unions or the federal government,” reads a tweet from House GOPers. “House Republicans will demand accountability from the Biden admin for labeling concerned parents as domestic terrorists.”

Education is proving to be yet another battleground in the midterm elections, though one that may take a backseat to other issues in November. A recent poll found that just 3% of voters listed education as their top priority, far behind issues like the economy, crime, and the environment.

But that won’t stop partisans from making their case to voters with just two weeks to go before control of Congress is decided. The White House has been aggressively trying to rebrand itself as a champion of school reopenings, with Cardona releasing an op-ed making that case the same day as a previous round of test scores was released showing major losses.

One thing everyone agrees on is that learning loss was severe over the last two years.

The biggest score declines were in math, which the National Center for Education Statistics said in a press release was the biggest decline ever recorded. For fourth graders, math scores declined by 5 points to 236 from their 2019 number of 241, while eighth grade scores plummeted 8 points from 282 to 274.

Teachers unions have been among the biggest targets of Republican attacks. The Republican National Committee posted a video in September of Cardona thanking two union presidents, with the RNC claiming the union bosses “kept schools closed and forced masks on 3-year-olds.”

Becky Pringle, president of the National Education Association, released a statement this week again blaming the pandemic, rather than policy, for students’ struggles. She said attacks on school closures are largely political.

“While some will try to cherry-pick the NAEP results to serve their own political agenda, we know that student success should not be politicized,” she said. “The results confirm what educators have been sounding the alarm about for more than two years: The pandemic exacerbated existing gaps in opportunity and learning experiences between white students and students of color, as well as between well-funded schools and chronically underfunded ones.”

Trump-era Education Secretary Betsy DeVos argued that learning loss is not a pandemic story, saying the low test scores are evidence that the public education system needs to be reformed.

Despite Biden administration officials saying they favored school reopenings in 2020 and 2021, they still sometimes sound the alarm about the pandemic today.

White House COVID-19 Response Coordinator Dr. Ashish Jha claimed Tuesday that he was pushing for open schools as early as fall 2020, but when asked by the Washington Examiner whether he believes schools should require COVID-19 vaccines for children, he said the decision should be left to local leaders.

Biden similarly said the pandemic is a “global health emergency” while getting his fifth shot against the virus Tuesday and blamed Republicans for halting COVID-19 funds in Congress.

“We have to keep up the fight together,” Biden said, directing his comments at “friends in Congress” who say “there’s really no reason that the government should be paying for it.”