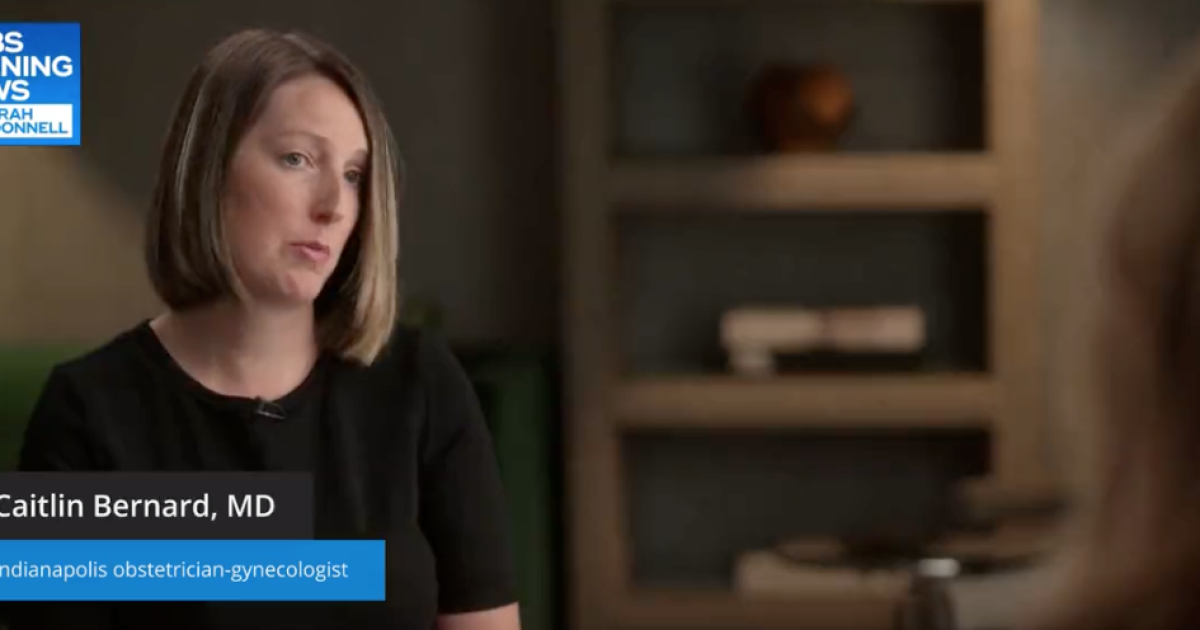 The Indiana doctor who records show provided care to a 10-year-old Ohio rape victim who crossed state lines seeking an abortion responded to doubters questioning the veracity of the story by encouraging them to “come to my office” to see it for themselves.

Dr. Caitlin Bernard said in a new interview she felt “threatened” in her line of work as an obstetrician-gynecologist since the Supreme Court announced its decision to overturn Roe v. Wade and that now, abortions have transitioned from being a “life-saving procedure” to instead being used as a political weapon.

“It shows how abortion, instead of being part of healthcare, which it is, a life-saving procedure, which it is, had been used to create a wedge between people politically and personally,” Bernard told Norah Jones on CBS Evening News. “It shows how far we’ve come and how sad that is.”

EXCLUSIVE: Dr. Caitlin Bernard, who according to Indiana state records provided an abortion to a 10-year-old rape victim, tells those who doubt the veracity of children needing abortion: “Come spend a day in my clinic.” pic.twitter.com/6cD6kMgcKx

It was reported on July 1 by the Indianapolis Star that a 10-year-old rape victim who was six weeks and three days pregnant traveled to the state after her Ohio doctor called an Indianapolis obstetrician-gynecologist for help. The newspaper spoke with Bernard, who said she had provided care to the young girl.

The story raised several questions, and some doubted whether it was true after multiple fact-checking sites could not corroborate the story independently. Ohio Attorney General Dave Yost also questioned the story, saying there was no evidence of a report being filed in the 10-year-old’s case.

Nearly two weeks later, Gerson Fuentes was arrested after he confessed to raping the girl on at least two occasions, police said. Fuentes pleaded not guilty in a Franklin County court on Monday. Additionally, the Indianapolis Star reported that Bernard filed the appropriate abortion disclosure forms on July 2, within the required three-day window dictated by Indiana law, according to records. Fuentes pleaded not guilty to felony rape charges on Monday.

Questions on whether the story was true, and larger doubts on whether children need access to abortion care, are particularly dangerous and highlight the need to keep health decisions between doctors and their patients, Bernard said.

“Come spend a day in my clinic. Come see the care we provide every day,” Bernard said in response to those who questioned the veracity of the story’s details. “The situations that people find themselves in and in need of abortion care are some of the most difficult that you can imagine. That’s why we, as physicians, need to be able to provide that care unhindered. That medical decisions need to be made between a physician and their patients.”

Bernard is gearing up for a lawsuit for defamation against Indiana Attorney General Todd Rokita over claims she did not adequately report performing the abortion in compliance with state law. Rokita has vowed to “defend against baseless claims.”

However, an independent investigation from Bernard’s employer concluded she did not violate privacy regulations and filed a report to the state’s health department.