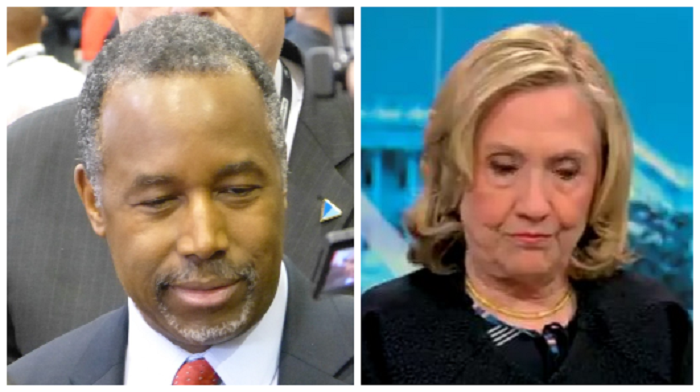 Carson made his comments in an interview with Fox News host Matha MacCallum.

MacCallum aired a montage of criticisms against Thomas, mostly by so-called comedians, and delivered with a particular level of vitriol since the Supreme Court’s recent ruling overturning Roe v. Wade, for the doctor to respond.

At the end of the clip was a segment from a recent interview with former First Lady Hillary Clinton.

Clinton shockingly launched a personal attack against Thomas, the only black man sitting on the Supreme Court, saying she has always known him to be “angry” and a “person of grievance.”

Hillary Clinton: “I went to law school with Justice Thomas. He’s been a person of grievance for as long as I can remember… grievance, resentment, anger.”

Dr. Ben Carson responded to Hillary’s comments about Clarence Thomas, along with the personal attacks coming from bitter leftists, saying they were “nothing particularly surprising.”

He proceeded to eviscerate liberals as only a world-renowned neurosurgeon and former director of pediatric neurosurgery at Johns Hopkins University could.

“For many on the left, the only thing worse than Satan is a black conservative,” he fired back. “They feel that Clarence Thomas is ripe for particular scorn because he is black and he’s supposed to think a certain way.”

Watch the latest video at

As for Hillary’s controversial comments on Thomas, Carson vehemently denied her accusations.

“I’ve known Clarence Thomas for decades. I don’t find him to be that way at all,” he replied.

The former Republican presidential candidate pointed out he and Thomas are members of the Horatio Alger Society, where he is admired “not because he is a Supreme Court justice, but because of his personality.”

“He’s a perfect example of what my mother used to tell me,” he added.

“She would say, Benjamin, if you walk into an auditorium full of racist, bigoted people, you don’t have a problem. They have a problem because they’re all going to cringe and wonder if you’re going to sit next to them, whereas you can sit anywhere you want.”

Hillary right now is cringing and hoping she never has to sit next to Clarence Thomas.

Carson’s Not Afraid to Call Out Extremists on the Left

Carson also pointed out that Thomas certainly isn’t going to let others’ “grievances, and prejudices, and hatred to affect his life.”

The good doctor has a history of knocking leftists down a peg or two using the most gentle and softspoken of approaches.

As HUD Secretary, Carson penned a letter to Representative Maxine Waters (D-CA) accusing her of “shamelessness” and lacking in “basic manners.”

Representative Ilhan Omar (D-MN) tried to mock Carson over his appearance at a House Financial Services Committee hearing in 2019 saying, “Not sure he was fully awake.”

Carson fired back with an epic tweet in which he stacked his career credentials against hers.

“I know what it’s like to actually be sleepy, especially after 18-hour surgeries and operating on babies in the womb,” Carson replied, noting that Omar and her Democrat colleagues don’t view unborn babies “as having a right to life.”

Since you brought it up… I know what it’s like to actually be sleepy, especially after 18-hour surgeries and operating on babies in the womb. I hope @IlhanMN knows I care about all people, even those she doesn’t recognize as having a right to life. https://t.co/BRl3ibSKM3

As for Thomas, George Washington University has recently dashed the dreams of intolerant liberals who sought to get him fired from his job there as an adjunct professor.

“Because we steadfastly support the robust exchange of ideas and deliberation, and because debate is an essential part of our university’s academic and educational mission to train future leaders who are prepared to address the world’s most urgent problems, the university will neither terminate Justice Thomas’ employment nor cancel his class in response to his legal opinions,” the University responded.

Perhaps if they weren’t such angry people full of grievance, they’d come to accept Thomas as the admirable, intelligent man that Carson knows.